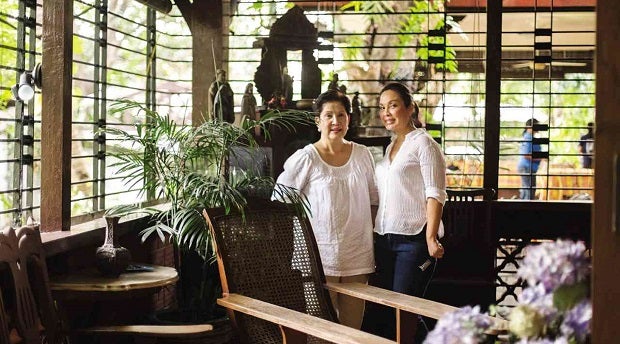 ELDER siblings agreed to assign their parents’ house to Senator Legarda’s aunt Marissa for being the youngest child.

Stray golf balls, catfish of unknown provenance, and a life-size statue of the scourged Jesus Christ that roams the grounds during the wee hours are just some of the stories told by residents inside the Bautista compound in Malabon.

Resting at the border shared with Caloocan, the 4,000-square-meter property used to host a single structure built by German national Otto Scherer in the 1930s that was taken over by the Japanese imperial army during World War II.

After the war, the legendary Manila Times editor Jose “Joe” P. Bautista and wife Carmen (nee Gella) bought the property from Scherer’s descendants and lived there with their seven children.

Looking at the neighborhood now, one finds it difficult to imagine that only a few decades back, the part-Spanish colonial, part-Eastern European structure used to be surrounded by tall grass and a golf course.

Only the towering mango, sampaloc and santol trees stand as silent witnesses to the past.

Right behind the ancestral house are industrial buildings, including a nail polish factory.

Still, the gray drabness outside does not diminish the house’s period-movie charm.

Sprinkled between walls painted blue and yellow where paintings by Elmer Borlongan and H. R. Ocampo converse are antique furniture, santo and tchotchkes that remind the residents of travels abroad.

Back in the day, the late couple’s second son, lawyer Jose Bautista Jr., would wake up to a batch of complimentary newspapers carefully arranged atop a table in the living room every morning.

There were also loads of secondhand books bought from Popular Bookstore by the man he called Papa.

“This is the reason I read all the newspapers to this day. Because Papa was editor of a newspaper, we had all the papers,” he said.

The area where the house sits was called Northern Hills then. Twenty years or so after the house’s construction, the University Hills subdivision stretching between Malabon and Caloocan was developed in the area. The Bautista compound is now called Dunwoody Tech.

As part of the sales talk given to his parents, the former owners said it was nearly impossible for the house to succumb to floods.

“Our parents were told that the ground where the house stands is level to the roof of the Great Eastern Hotel in Echague Street in Quiapo. It meant that Manila would have to go underwater before the floods would reach us,” Bautista said.

True enough, the compound was soaked but did not go underwater like the rest of Malabon when Typhoon “Ondoy” struck in 2009.

Trouble was, relatives of Scherer’s Filipino wife were still renting the house when it was offered to the Bautista patriarch.

Bautista said there were “subtle hints” from those relatives that they did not want to leave. “Just to discourage us, sabi marami daw mga Japanese na nilibing dito,” he recalled.

But instead of discouraging the family, the story even got the young and imaginative Bautista to thinking that there might be Japanese treasure hidden somewhere in the house.

There was apparently none. But his youngest sister, Marissa Bautista-Hipolito, the current resident, said there was a time they discovered a samurai (Japanese sword) within the compound.

Bautista recalls a house that stood beside a golf course. “It was the forerunner of the Manila Golf Club. Mama would gather the stray golf balls that flew here and give them to an American priest, one of the Oblates Fathers who lived in Grace Park, in Our Lady of Grace Parish,” the lawyer said.

Hipolito also has her bucolic recollections. “The area surrounding the house was all talahib. There were no buildings or houses. We could see the angel sculpture on top of the Bonifacio Monument from here,” she said.

Sen. Lorna Regina “Loren” Bautista-Legarda, granddaughter of the editor, still visits on Sundays and stays in one of the four newer houses built inside the compound.

She said elder uncle, Dr. Ariston Bautista, would talk of a time when Avenida Rizal and McArthur Highway were visible from the eastern vantage point.

Out west, lawyer Bautista said, was a view of the Philippine National Railways station.

“When we came here, the railroad was already there and we could see the train passing by,” he said, adding that between the golf course and the train station was an empty field—a far cry from the blight and crowds today.

With the elder Bautista as editor of the Manila Times, it was inevitable that VIPs would come over during special occasions. Hipolito said the late Sen. Benigno “Ninoy” Aquino Jr. was her father’s “favorite reporter.”

(The late Joe Bautista assigned the then 18-year-old Aquino to cover the Korean War, a precocious stint noted as one of Ninoy’s outstanding achievements.)

Also constantly present were members of the Roces family who owned the Manila Times.

Senator Legarda said that when her grandfather was Manila Times editor, the late Senate President Blas Ople worked for its afternoon paper, the Daily Mirror.

When Legarda was still a neophyte senator, Ople approached her one time and said the elder Bautista used to lend him cash when he was in dire straits as a journalist.

Ople said he was never able to pay the old Bautista back. Whenever payday came, the reporters who owed her Lolo Pepe would sneak at his desk and filch the old man’s listahan of debtors, the late senator confessed.

Lawyer Bautista said his father often received liquor as gifts from friends. But he was a nondrinker. Wife Carmen would pass on the bottles to the Oblates Fathers who eventually became frequent visitors and would come “for no reason at all.”

Even the garbage collectors benefited from the loot. “Mama would hand over liquor instead of cash when they came,” he said.

Hipolito, as the youngest child, would eventually inherit the ancestral house. The elder siblings put up homes that now surround the original structure.

Kuya Ariston or “Daddy” and wife Raning live in the southeast corner, Bautista and wife Emy at the northeast while Legarda’s widowed father Antonio lives in the southwest.

Sister Pacita Bautista-Adriano and husband Felipe have a more modern house in the northwest corner that Legarda has turned into a library-archive of photos, trophies, plaques and other reminders of her previous incarnations as a model and broadcast journalist.

Bautista the lawyer admitted he feels nostalgic whenever he reads recollections by Inquirer columnist Neal Cruz about the fields and fishponds of the Malabon of his youth. “He would write those columns during the summer months. His experience was the same as mine,” he pointed out.

Legarda, who chased butterflies inside the compound as a child, recalls seeing catfish that mysteriously appeared in the garden during the rainy season. “May kaunting baha sa labas ng bungalow namin, malinis na tubig na may hito at bangus. Maybe a fishpond overflowed somewhere,” she explained.

At present, tall trees and the newer structures inside the compound have obscured the old house when viewed from the gate.

Every Holy Wednesday, the Bautistas hold a pabasa and open the gates to neighbors and friends. A glass-enclosed altar showcases century-old santo including a life-size Nuestra Señor de Columna, or the Christ tied to a pillar while being scourged; a Nuestra Señor de Pacencia (Ecce Homo), and a smaller-sized crucified Christ surrounded by Mother Mary, St. John and Mary Magdalene, among others.

Bautista said that before minor renovations were made inside the house, the altar was located inside the room he shared with Kuya Ariston and their paternal grandmother Agapita or “Lola Pitang.”

Bautista’s bed stood at the foot of the Señor de Columna and its bloodied face and body terrified the young boy. “He looked directly at me as I lay in bed so I would pull the blanket over my head,” he recalled.

Niece Guia Gaskell, daughter of his sister Lourdes, remembered a time when Lola Pitang looked for a wigmaker after noting that the Señor de Columna’s hair had begun to unravel. There was no landline phone at the time but the wigmaker suddenly arrived, looking for Lola.

“Pinapatawag daw po ninyo ako? May magpapa-ayos ng buhok ng santo,” the wigmaker asked the bewildered grandma. The wigmaker then turned to the altar and pointed to the bloodied Christ.

The seated Señor de Pacencia, on the other hand, is believed to leave his post every now and then and roam the compound at night.

Bautista said several witnesses have reported seeing the Señor de Pacencia at the house’s terrace that faces the newer structures.

“They would ask whether we have an elderly guest when He appears outside,” the lawyer noted.

Maybe the heavenly appearances ensure that the Bautista compound remains a happy place of one-of-a-kind family memories despite the urbanization all around.