Stories of friendship, courage a hit with kids with cancer at Read-Along | Inquirer Lifestyle ❮ ❯ 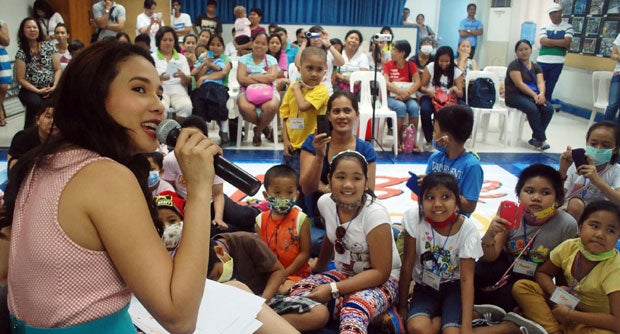 Stories of friendship, courage a hit with kids with cancer at Read-Along

The event, which marked Cancer in Children Awareness Month, was held at the Inquirer main office in Makati City.

Singer and television host Karylle, a longtime Child Haus volunteer, read “Watership and Joi,” a tale that follows the unusual relationship between a giraffe and a sea urchin and their adventures on the road. It was written by her husband, Sponge Cola vocalist Yael Yuzon.

Veteran Read-Along storyteller Rich Rodriguez read Angelita Aragon’s “Ang Magkaibigan,” a story of friendship between an ant and a dove.

The story was inspired by Dr. Rachael Marie Rosario, executive director of the Philippine Cancer Society (PCS), who survived cancer during her teenage years.

Just like Raquel, Rosario had to wear wigs and bandanas when she was 15 years old to conceal her hair loss due to chemotherapy. “One of the effects of cancer to a child is becoming conscious of hair loss,” she told the Inquirer in an interview after the session.

After two years of treatment, Rosario survived non-Hodgkin’s lymphoma, a type of cancer infecting the lymph and immune system. “I totally relate to how the cancer kids are feeling, the good things and the bad things they’ve been through,” said Rosario, who has been serving in the PCS for more than 15 years.

“The journey of getting sick with cancer is not easy, so you need that strength and courage to fight the disease,” she said.

“This is more than just a story. I hope it inspires and encourages the children and their families,” she said.

After the reading segment, Rosario also shared with the kids her experience as a cancer survivor.

Karylle, a familiar face to many of the kids, said it was her first time to read “Watership and Joi” to children. “I’m just happy that they were listening and participating. I know the story is a bit unconventional,” she said. (See video of Karylle reading to kids, courtesy of Inquirer.net at youtu.be/pLkCgZIQZn0.)

Copies of this story were given away to guests at Karylle’s wedding last month.

“I love the idea of reading and people gathering to read and listen. It does a lot for the kids,” she said. “They’re really just kids. If some people ask—they’re pedia cancer patients, but that’s a big word. To be labeled as cancer kids, it may be a bit harsh.”

“They do spend a lot of time in the hospital. That’s why they get excited when we talk about other places like Tagaytay. Their eyes really light up. Anything apart from the hospital is super fun,” she added, recounting the other activities she has done with the kids.

After attending the read-along, Karylle said she hoped the kids would be drawn to reading. “I keep bugging them to read. I want them to get the habit of reading. I wish more people who do activities with the kids also consider doing reading sessions, apart from games and dancing,” she said.

Analiza, 36, came to the session with her son Jay. She said she liked the story about Raquel, who is “an inspiration to the kids.” “We did not know that it was a story about Dr. Rosario. It is proof that there is hope. Look at her now, she’s a doctor. We just have to be strong.”

Social worker Rosemary Garcia enjoyed Rodriguez’s tale the most. “The story was interactive and all the kids really participated. The way he acted out the story also helped the kids imagine the story better. He was very funny and lively,” she said.

“I learned from today’s stories that I have to be brave and that I should not give up even when I am sick,” said Camille, who is looking forward to attending more read-along sessions and “meeting more new friends in the future.”

After the session, the kids were treated to snacks courtesy of PCS and to an arts and crafts session by Museo Pambata volunteers. Books from the Rotary Club of Makati were given away as prizes in the question-and-answer portions after each reading segment.

Read-along in Urdaneta: Introducing the carabao