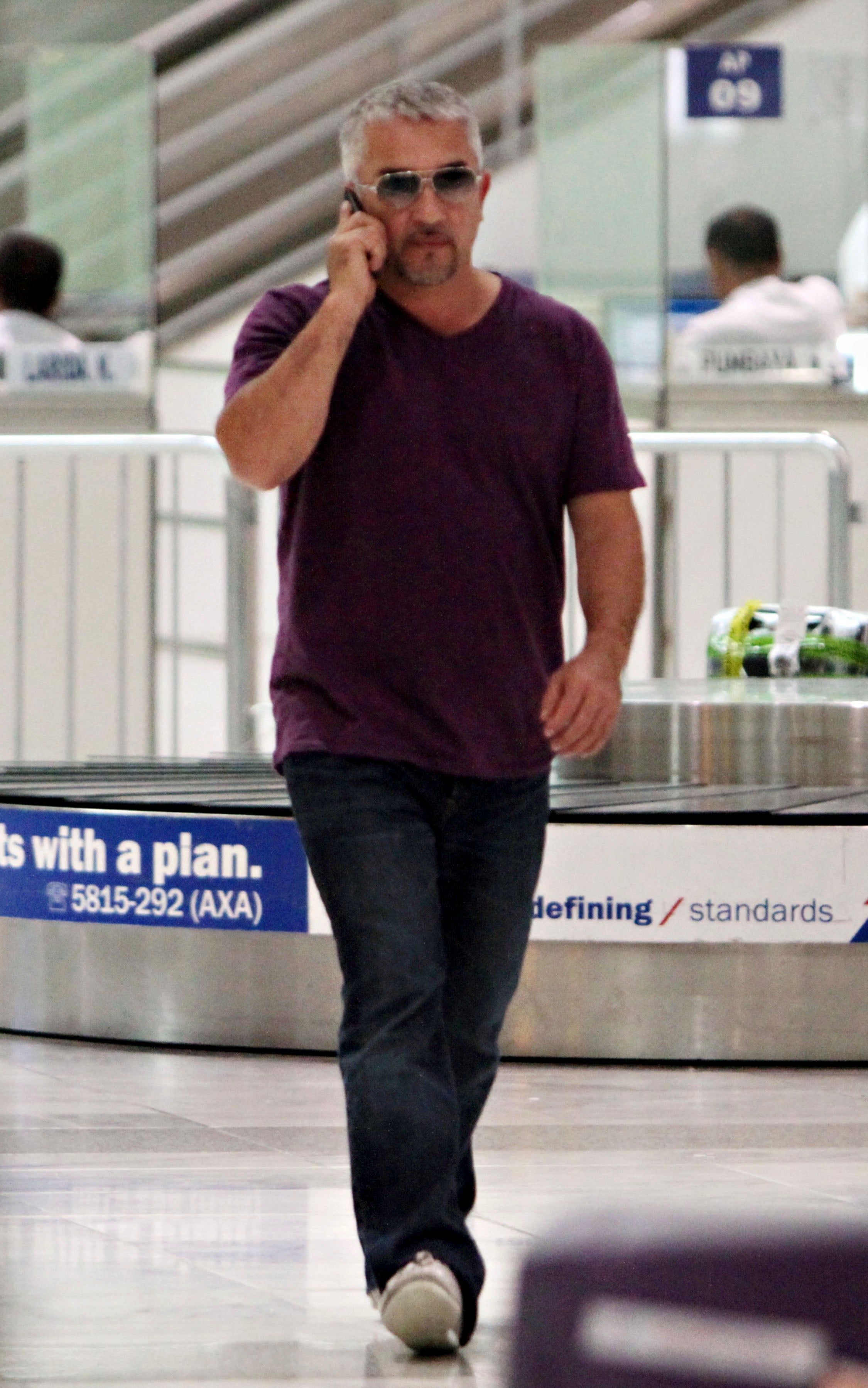 Famous dog trainer Cesar Millan aka "the dog whisperer" arrives at the Ninoy Aquino International Airport (NAIA) terminal 2 via Philippine Airlines flight PR 356 at 6:05 am on Saturday, April 27. Millan is in the country to appear in a summer show featuring dog training demonstrations and more. GRIG C. MONTEGRANDE/INQUIRER PHOTO

MANILA, Philippines—He grew up among dogs in Culiacan, Mexico, and earned the moniker “El Perrero” (the dog boy).

“In my culture, that wasn’t a positive thing,” Cesar Millan said in a one-on-one interview with the Philippine Daily Inquirer. “We saw dogs as dirty, and I was the kid with the ticks and fleas.”

But Millan, 44, grew into the role and eventually gained fame as The Dog Whisperer, after his popular TV series.  He is in Manila for a similar show Tuesday night (Apr. 29), “Cesar Millan Live in Manila,” at the Eastwood Central Plaza, the first shopping center in the Metro open to pets of all sizes, with dogs allowed even in its many shops and restaurants.

At a press conference Monday morning, Millan professed to enjoying Manila’s sweltering heat: “Hey, I love this weather. I grew up in this kind of heat,” he declared.

“El Perrero” recalled spending weekends on a farm in Sinaloa, Mexico, where his grandfather, Teodoro, was a tenant, and where he learned the concept of pack leadership. It was something that the old man had practiced naturally, and which Millan made the cornerstone of his dog training style.

As a young man of 21, Millan entered the United States illegally with only $100 in his pocket and no knowledge of English. But he quickly became known for his way with dogs, attracting the patronage of celebrities like actress Jada Pinkett Smith, who actually paid for Millan’s English lessons.

Today, Millan is known worldwide as the star of the National Geographic television series “Dog Whisperer,” which has been aired in 80 countries, and “Cesar to the Rescue,” which debuted this month on NatGeo WILD. He is also a best-selling author, publishes the magazine Cesar’s Way, runs the Dog Psychology Center in Santa Clarita, California, and is behind the Cesar Millan Foundation, which provides assistance to animal shelters.

Manila is the second stop of his Asian tour that began in Indonesia and will bring him next to Singapore and Hong Kong.

Wearing a blue shirt, the charismatic Millan animatedly answered questions during the press conference, standing up often to dramatize his point. When told that he preceded US President Barack Obama who would be arriving Monday afternoon in Manila, he joked, “I know! He’s following me!”

He also gamely demonstrated his trademark “Psssst,” loud and sharp, which he uses to get a dog’s attention. Told that Filipinos use the sound to call each other, he quipped, “You know where I first learned that? My mother.”

Parenting, in fact, is a lot like training a dog, according to Millan, and uses the same principles he espouses in his trade. “Exercise, discipline, affection, like [I use]  with my sons—Andre is 19, Calvin is 13. It’s exercise, discipline, then maybe a car!”

Millan addressed a wide range of subjects during the press conference. But he didn’t bring along Junior, the pit bull who is now his constant companion and the successor of his original “right-hand man,” the immensely popular pit bull named Daddy.

Daddy passed away at age 16 in 2010, and Millan has publicly acknowledged being depressed over the loss of the dog that he had called “my Buddha.”

“Daddy was there for the best part of my life, when I was still trying to make it,” he said.  “Nowadays, since I’m trying to share my message with the world and can’t bring Junior with me all the time, he doesn’t get the best of me, like Daddy did. When you lose a dog, you deal with the grief. And then you should have another dog, to pass on the lessons you [had] learned.”

Millan, who works closely with pit bulls, often speaks against breed-specific legislation in the US (which outlaws ownership of pit bulls in some states) and stereotyping. Millan said he knew about the Cavite and Laguna pit bulls rescued from dog fighting rings in the Philippines two years ago.

“All dogs just want harmony and balance. Animals were not created to kill each other. It’s humans who do that,” Millan said.

On the issue of dog fighting, he said: “There are three kinds of people: those who are fearful, those who don’t know, and those who don’t give a damn. It’s the people who derive joy from this who are sick. It’s really about compassion.”

On dog eating, a practice that persists in this part of the world, he shrugged: “I’m not here to judge cultures, but maybe we can enlighten people.”

Millan expressed a desire to meet a Filipino native dog or asPin (asong Pinoy), often found abandoned in shelters for lacking the right pedigree.  Not surprisingly, the Dog Whisperer is a  strong advocate of adoption from shelters.

“About 600 million dogs die every year from neglect and abuse,” he said. “It’s also selfish for humans to think only in terms of breeds. That means we’re so judgmental, and not as loving as we think we are. It’s not the breed that makes you proud, but the relationship. Then there are many people who say they love dogs, but don’t treat them well—the dog is stuck in the backyard all day.”

Since some asPins and rescued dogs develop trust issues, Millan showed this writer the best way to deal with such an animal, and demonstrated how to slowly approach them. “Surrender is what you want. Submission means being open-minded. It’s like going to church and surrendering to God. It’s not about being weak. In nature, dominance and submission are the only two states of mind that exist. When you show too much affection, you’re coming from an emotional point of view, while I’m coming from an instinctual point of view. Your way has a lot of heart, but rehabilitation won’t be successful. The rehabilitation doesn’t stop when the dog trusts you; he has to trust society. That’s when a dog is happy.”

Critics have said that not everyone has Millan’s abilities and seemingly natural rapport with dogs, making his training style hard to replicate and unrealistic. He cited “control” and “energy” as important factors in training.

“Well, I’m not afraid of aggressive dogs, and to work with them, you do have to be well-established,” he told the Philippine Daily Inquirer. “Most people can work with fearful dogs, but to have the patience and determination when a big dog wants to kill you? How do you control yourself? It’s your energy that stops him from touching you. If you scream and pull back, that’s when a dog thinks, ‘You are weak.’ I’ve worked with NBA players three times my size, and they’re scared of dogs. It’s not your size; it’s your mind that’s more powerful.”

Millan said he understood when people preferred the company of dogs to people sometimes. “It’s a little out of balance, but I get it,” he said. “When I was an adolescent, the dogs became my ‘safe spot.’ They became the only friends I had. Of course I would gravitate to a different species that knows and understands and loves me.”

He added: “There’s a lot of cruelty in humans. In life, though, we need to find a balance. You have to set rules and limitations—that is called discipline. And you have to practice that in all your worlds.”

He might as well be speaking about his sons.

While Andre wants to become a teacher, Calvin already has his own TV show, “The Puppy Whisperer,” on a youth channel. “They both know dogs,” their proud father said. “Sure, I want to retire soon,” he added with with a chuckle, “but yes, the goal is for my kids to continue such a beautiful job and responsibility. I wish my grandfather could see this. I am a reflection of what he did, but I just took it to another level.”