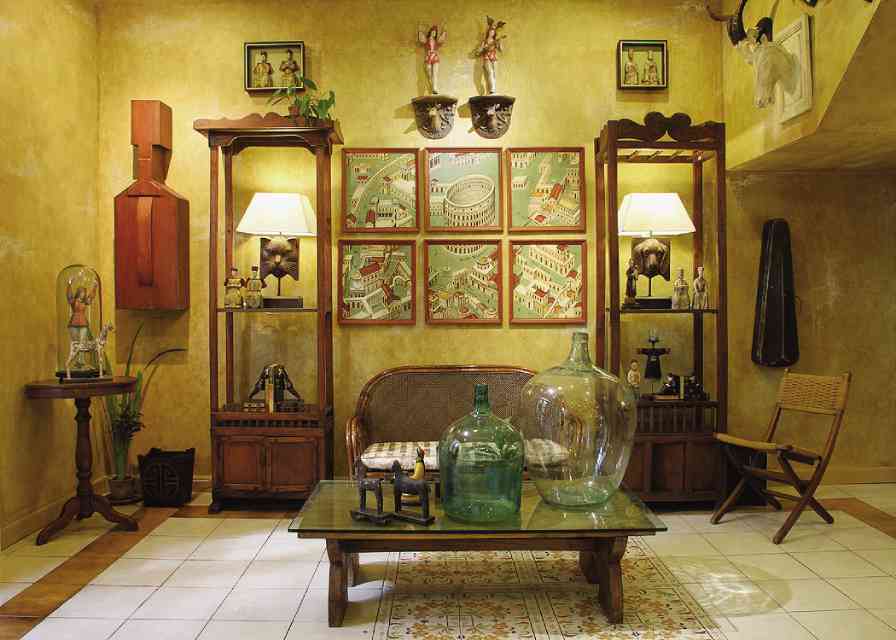 There is something comforting about displaying objects from the past. Not only do they evoke nostalgia or a yearning for crafts that

no longer exist, but they also lend timelessness to a home décor.

This penchant for nostalgic designs and the entrepreneurial spirit of choreographer Alice Reyes led her to establish an export-oriented home accessories company, Chrysara (named after her children Chris and Sara Upton). For so long, it was selling to wholesalers in Europe, the Americas, Asia and Australia and retail clients such as Wisteria and Ballard Designs in the United States.

Following its success in trade shows and a demand from the local market, Chrysara opened a retail store called Nest in Mandaluyong and Pampanga, near its factory.

“We shy away from industry trends,” said Sara Upton, Chrysara Nest sales and marketing director. “Chrysara started out doing simpler items like baskets and rough carvings. As the

company trained more skilled artisans, we developed more complicated designs. Today we have thousands of individual designs that are references to a wide range of historical and aesthetic periods.

She added: “Inspiration can come from anywhere. A lot of ideas come from travels to Europe and Asia and from books, magazines, antique prints, trips to museums and craft/art fairs. We are often inspired by things we see on the street, like a beautiful oversized hibiscus, a great architectural fragment or a fabulous patina on a piece of folk art.”

Popular in the export market are pieces in the wooden Mannequins collection such as the 18th-century dressmaker dolls, the Chinese Gallery figures and the nature-inspired birds.

The Orientalia displays wooden kimonos on the wall, figurines of Chinese fishermen and royalty, and Cantonese cutout boxes.

Filipinos favor medieval-inspired religious items such as the triptych umbria made of resin and wood, carved candleholders, and angels. Icons such as Our Lady of Guadalupe and San Rafael, made of resin, mimic their original ivory counterparts.

Also popular in the European market are figurines from the “Commedia dell’arte” (the 16th-century Italian comedy) such as Harlequin and Columbine that serve as candleholders.

Victorian Silhouette collection pays homage to the silhouette art of the 18th and 19th centuries, in which portraits in black were set against a pale background. This collection comprises of bookends made of profiles of people and images of busts in black.

The American folk art comprises children’s toys such as animals and wooden cars on wheels and brightly painted objects to amuse the eye. Some of these figures in comical poses were called “whimsies.”

The attraction of the American folk art is the innocence of their crafts as opposed to the religious items which manifest skill in metal and woodcarving.

For a little fantasy, fairies, frogs, dwarves and gnomes dominate the Garden collection. Mushrooms are carved into light sconces.

“Clients appreciate the level of detail in our items, whether it’s in the way a face is carved or how a complicated finish is applied. We take our time to do things right. That shows in the quality of each piece,” said Sara.

One of Chrysara Nest’s distinguishing characteristics is the patina or the timeworn look which appeals to Europeans. To them, the aged and blemished look has more character. On the other hand, Filipinos prefer objects that are “flawless.”

“Chrysara is really fortunate to have a team of highly skilled designers, carvers, resin casters, tinsmiths and painters who can translate almost any idea into a beautiful finished product. We produce over 200 new designs each year. Virtually everything is done by hand. It can take two weeks to two years to develop a specific collection; we don’t like to bring items to the market that we are not 100-percent satisfied with from a design and quality point of view,” Sara pointed out.

Good sales prompted Sara to launch a consumer website, www.chrysaranest.com. In the website’s Gifts section, there are suggested items for men and women, as well as affordable items under P1,000; between P1,000 to P2,000; and over P2,000.

“Having our retail operation allows us to offer more styles to the local market. Because we have such a wide range of products, we literally have something for almost anyone,” said Sara.