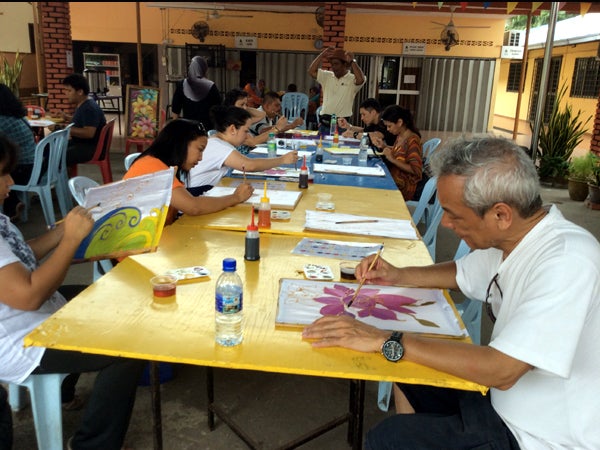 SELANGOR, Malaysia – Don’t  use your  index finger to point at anyone.  Don’t speak loudly.

Those were tour guide Raj’s repeated  reminders to  members of the  Philippine  media travelling to  a far-flung village in Selangor, Malaysia  for an overnight  homestay  program  last Saturday.

It was already around 9 p.m. but the tour guide’s energy was still up, giving a short history on almost every establishments or sites that his visitors could see from the windows of the tourist bus they were riding on.

And as the bus was getting closer to its destination, Raj would stand up in the moving vehicle to remind the guests about the do’s and don’ts while staying with foster families.

“Just use your thumb to point at any person. They will be very happy,” he said.

Because pointing at anyone using index finger, he said, is considered rude in Malaysia.

And don’t speak loudly too. “No one does that here,” Raj said.

Even if the Malays are trapped in a heavy traffic, he said,   no one honks his car “because they find it very rude.”

“Respect and tolerance,” Raj once again told the media, “But respect is  more important.”

When the guests finally reached their destination, they were received by Abu Bakar Moin, manager of Agrotourism Homestay Sungai Sireh. The village  is a two-hour drive from Shah Alam, the estate capital of  Selangor, one of the 13 estates of Malaysia.

The group was then divided into three and each group was sent to its assigned foster families.

This reporter was among the last group sent to a foster family.

Tired and sleepy from a full-packed schedule during the day that started at 8am, our group had to endure the narrow and bumpy road to get to the house of our foster family.

At around 11:30 p.m., the group finally reached its destination.

A smiling Maria, wearing a face veil, welcomed her guests to her family’s one-story but spacious house. Parked outside the house were six different colors and brands of cars.

As she led her guests to the room, two young kids and a lady, all lying on the floor while watching television, caught our attention.  Maria later identified them as her children. She said she has eight children and two sons-in-law, who were all staying in the house.

Because it was already late, the guests slept immediately.

At around 6:30 a.m. the following day, this reporter saw Maria at the kitchen already preparing breakfast for her family and guests.

“I only speak a little English,” she told us when we finally sat in a table for breakfast. Her husband, who does not speak English, and their pregnant daughter with her partner, also joined the people at the table.

While Maria and the son-in law were engaging the guests in a small talk, the father and daughter were quietly listening and watching on the side but they laughed with the group sometimes.

Maria’s eldest daughter and her husband also later joined the table but unlike the first couple, the two simply smiled at the guests and ate their food without a word.

Our host’s notable consistent use of her thumb while pointing at things made the guests more conscious of their hand gestures. The tour guide was right, after all.

For Maria, waking up early in the morning to prepare breakfast for her children, who will either go to school or work, is her everyday routine.

“When they leave, I spend the whole day cleaning the house and cooking for them,” she told this reporter after breakfast.

She was just starting to get comfortable sharing her stories when the bus that would take her guests back to Pusat Penerangan Pelancongan (Tourist Information Center) arrived at 8:30 a.m.. The group bid goodbye to the Maria and her family.

Our stay at our foster family lasted only for about eight hours, which most of the time were spent inside the bedroom.

At the center, the three groups were reunited for a host of activities, including fishing, kayaking, harvesting, and even painting as part of the homestay program.

It was the manager, Abu Bakar Moin, who started the program in 1995 when he had difficulty getting a good job in Kuala Lumpur.

“I can’t get good a job,” he said when asked how he came up with the  program. So he went around thinking of a job not only for himself but also for other families in their community.

At 120 ringgit for two days and one night per person, Moin said,  up to  40 ringgit went to the  host  family while the rest  went to the management  to pay the bills, electricity  and other expenses of its committee.

“It’s getting popular now,”  Moin said,  noting  that there are also other homestay  programs in Selangor.

Malaysia: A delightful fusion of lifestyle and culture