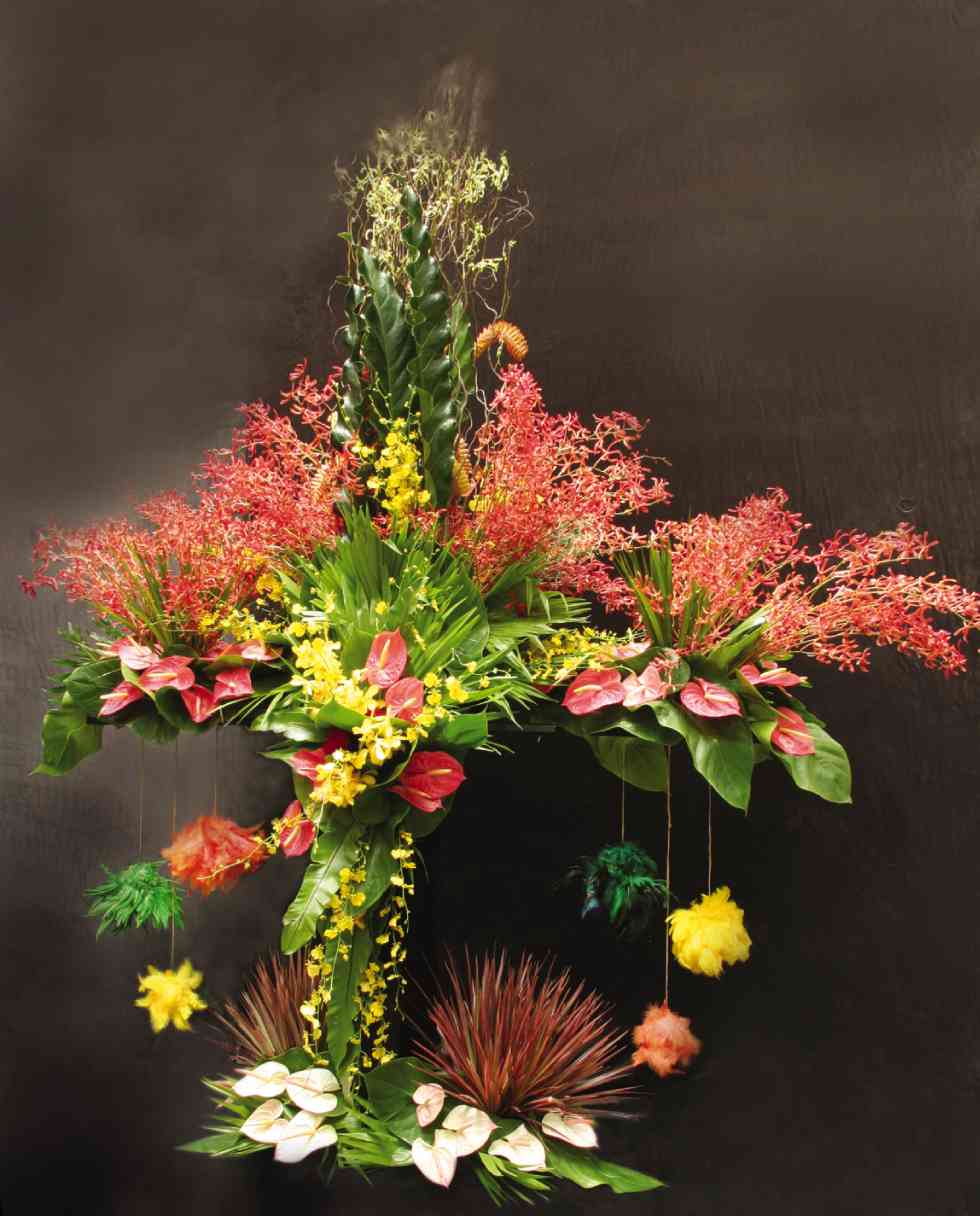 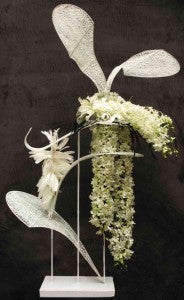 Bare and bountiful, rough and smooth, elaborate and spare, driftwood and blooms are polarities that define life.

Beyond his complex floral arrangements, there’s something yin and yang about the works of florist Richard Go.

Filipinos have yet to know the man touted in the international horticulture industry as the “Floral MacGyver.” His moniker was inspired by the hit ’80s American ABC TV show about a secret agent who got out of trouble by using simple, found objects instead of a gun.

The Baguio-born Go is also touted as one of the “Three Floral Tenors of Australia.”

Go explained that he incorporated Filipino elements in his works, which amazed the Australians. “I brought in local handicrafts, woven baskets, twirling vines, cutting leaves of golden cane palms and shaping them—things I learned in the Philippines,” he explained. “I went out of the box with upright pieces—not the normal A-line or round-bowl arrangements. Wherever you go in the world, you’ll always look back to where you started.”

As a member of the exclusive American Institute of Floral Designers (AIFD), Go travels worldwide to conduct workshops. On his last trip at “Enflor,” South America’s largest flower show in Brazil, he received a standing ovation.

He visited Manila recently, sponsored by Smithers-Oasis, specialists in floral artistry products, of which he is consultant.

Go calls himself a “botanical architect.” 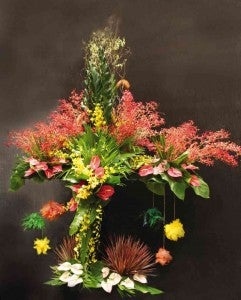 At a lecture organized by the Institute of Philippine Floral Techniques at Podium, Go explained:

“A floral architect uses flowers to convey a message through styling and using receptacles. It’s more lifestyle-oriented and suited to the venue or event. A botanical architect innovates from nothing. The field deals with structures, construction and horticultural materials. We use terms like cantilevers, hanging designs and use uncommon materials to create new forms and textures.”

He added that interpretative design is a genre where the placement of flowers, foliage, stems and accessories becomes visual metaphors of life.

In the lecture, he combined structural and interpretative designs to tell his life story, starting from a bare arrangement of woods to an extravaganza of tropical blooms and foliage.

The first arrangement was a crescent of gnarled woods whose arch symbolized the nurturing embrace of his parents and the fellowship of his peers. Its skeletal quality suggested the foundation of his life. 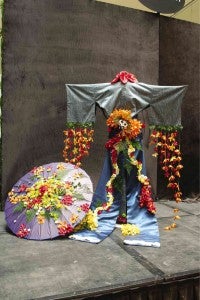 Go then showed a round planter made of gold, adorned with a wreath of Chinese bamboo, which refer to his Chinese heritage. It was topped by a mound of vandas, alluding to how his family molded his values.

Go studied veterinary medicine at the University of the Philippines in Baguio. In his childhood, his father cultivated chrysanthemums and roses.

Go opened a flower shop at Hyatt Terraces and ventured into events styling and landscape design.

A curved pole that held a woven driftwood basket, embellished with twirls of Cordillera morning glory vines, represented his growing restlessness despite his closeness to the family.

The vines represented Baguio, the basket, the family circle.

Go depicted his growth as a professional floral designer through vertical arrangements.

A triangular structure was decked with sisal garlands, dried Chinese bamboo and corn husks, tied by twine and strings.

“This symbolizes my education, from kindergarten to university,” he explained. “I left it open-ended because learning is continuous. The twines are all about building up.”

After selling his business, Go moved to Australia, got a second Bachelor’s Degree in Education in University of Sydney.

He pursued his calling by getting a diploma in floristry from New Zealand Professional Florists.

In the Manila demo, the structure was softened by yellow dancing ladies and vandas. 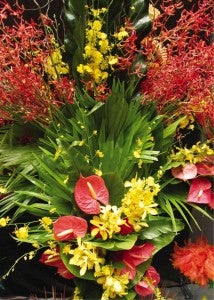 “Yellow means friendship, vibrancy and energy,” he said. “The yellow corn husks symbolize containing all the nutrients. All the good things are shown here in this arrangement.”

In contrast, a pyramid of tortured willows on a tree stump base, revealed the artist’s dark side.

“That’s why I used fiery orchids, red vandas and spider orchids to express the anger,” he said. “The red hypericum berries are like the drops of blood or tears when you’re all fired up.”

In the next setup, he combined remnants from the previous arrangements, such as the tree stump base, corn husks covering the steel rods, clusters of anthuriums and orchids to get a whole picture of his personality.

“The corn husks show the good side. The tortured willows at the base symbolize the grounding of my values and the flaring torch gingers at the bottom symbolize the vile side.”

Lotus pods, a symbol of purity in Asian cultures, connoted the artist’s core value of humility.

Go’s only horizontal arrangement, “Celebration of Life,” was a plethora of  vandas, spider orchids, champagne roses on a bed of anthurium and philodendron leaves, ivy trails and spiky dracaenas.

The profusion of vivid colors evoked the Filipino’s love for family gatherings and celebrating milestones. 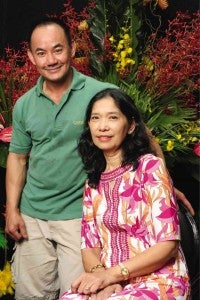 A career highlight was working with a team of floral designers to decorate floats at the Pasadena Rose Parade.

Go paid tribute to the grandeur with a structure made of three poles which held woven fans of mesh, glitter and dendrobiums, enlaced with lilies, roses and gypsophilias. The all-white expressed purity—he waxed philosophical about the innate goodness of man.

For visual humor, he created an ice cream arrangement, an ode to his favorite dessert. A conical receptacle was topped with a mound of millionaire’s vine, and cascading vandas, fiery orchids and anthuriums.

The piece de resistance was “Floral Symphony,” a lavish cross of six lush arrangements which marked various stages in a person’s life.

“The interpretation is that from the bottom, you rise to the top, expand and keep growing,” he said.

The base was covered with dracaenas on a layer of anthurium leaves. The spikiness of the dracaenas suggested growing out from the family roots. The main vertical frame showed foliage and ferns climbing up to represent education.

Since falling in love was the crux of most people’s lives, the focal point was an arrangement of red carnations, vandas, dancing ladies.

“The red spider orchids are off-shoots of a relationship of love and the heart spreads out with anthuriums,” he said.

Two horizontal planks were attached to the frame to signify the branching out. “You fly out and start a new life and family and a new generation will spring growth,” he said. Two arrangements of anthuriums and rambling oncidiums indicate venturing into a new direction in life.

“When two families unite, there’s your network that’s part of a greater one,” he said.

The arrangement was climaxed by large renaissance leaves, sprouting salixes or tortured willows, rattlesnake gingers, oncidiums and spider orchids.  “It ends with hope, no matter what happens, when you go up, there are new shoots to look up to,” Go said.