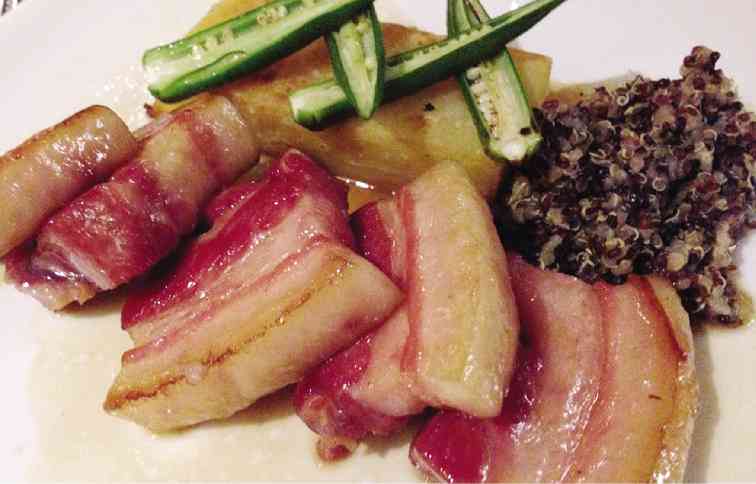 There is one food writer who insists, somewhat counterintuitively, that getting all his meals as freebies actually makes him a less-biased critic, since he is not encumbered by the bias of having to actually pay for his food.

This frees him up from the prejudicial effects of value-for-money, and allows for a more objective assessment of the food in itself. The logic is so paradoxical that I am actually unable to think of a suitable rebuttal.

Being myself one of the lesser mortals who has a bias for having to pay for meals out of my own pocket, I do care about value for money, whether the meal is expensive or not.

Even if restaurants are cropping up like weeds in Bonifacio Global City, and even if Maginhawa Street in Quezon City is reportedly the place where mustachioed hipsters are having their kale smoothies these days, Makati City is still the place to put up a statement restaurant. Allium, a new fine-dining place in a back street of Makati City, has everything going for it.

It has a beautiful dining room, with a bar that is inviting but not dominating, flattering lighting and excellent acoustics.

The menu is genuinely interesting, with intriguing options that don’t feel like these were cribbed off the restaurant next door, or the latest fad dishes from a Buzzfeed list.

The food seems to reflect a genuine creative vision of eclectic but not disparate offerings. There’s a second page of grilled stuff: steaks, basically, for boring people who order them only when they go out.

But how could that compete with veal cheeks and cauliflower purée, or Kampachi tartare (the Internet says it’s a kind a domesticated tuna), Brittany oysters, and more surprises.

We ended up getting the Kampachi sashimi, which was a delight, gone much too quickly; and the Brittany oysters, which were good to look at, all two of them, in their bowl of ice with a little purple flower.

There was a long pause, during which I regaled my wife with banter, tales of longing and loss, and quotations from the “Mahabharata.” And then we watched the man at the next table quietly fall asleep over his Bernardaud lithophane votive.

The mains came: Kurobuta pork belly with potato and quinoa for my wife, and the veal cheeks for me. I think they were one of the nicest things I have eaten recently, and the pairing with the buttery cauliflower purée was inspired.

The pork belly was less scintillating—a great deal of fat, not meltingly tender fat but bouncy, greasy fat. And if you set the fat aside, one is left with a kind of gussied-up tocino.

My wife and I were both still hungry and debated getting another main but decided against it. (A friend at the next table told us, sotto voce, that they had waited an hour for their mains.)

So, we opted instead for dessert.

After such a savory menu, the three desserts to choose from were a little anticlimactic, and I must be the only person in Manila to not like the Laiskonis egg, which is an emptied-out eggshell filled with chocolate and foamy custard. It didn’t help that the eggshell cracked into tiny bits as I attacked it with vigor, hoping that it would fill the hole in my stomach.

The strawberry tart was just weird, with macerated strawberries and two bits of pastries dropped from a great height. It had micro-basil, which was in keeping with the theme of the whole night—micro-food.

We were still hungry that we hotfooted it to Greenhills, a few kilometers away but which is another world. In Makati City the night had just begun, with diners arriving to take the 7 p.m. table we had booked. In Greenhills, at 9:45 p.m., we begged, pleaded and cajoled the restaurants to please feed us, anything at all.

The waiters looked at us with shock and disgust at the idea of eating anything past 9:30 p.m. The waiter at Zao finally took pity on me and accepted my order for a bowl of pho, but nothing else, no dessert, no coffee.

My wife tried to make a run for J.Co doughnuts, but she obviously didn’t run fast enough, because it promptly shut the doors on her and she had to slip back in through a restaurant kitchen door.

Around us, the lights were going out one by one. At 10 p.m. Greenhills goes to bed.

But the bowl of pho was probably the best thing I had all night because it actually fed me, and it cost only P288. For all the interior decoration, fawning service and nice flowers at Allium, we paid almost 16 times that amount, and even got a bit of food thrown in.

I love the idea of fine dining, but the problem is that it’s so easy to get something wrong (even the best of restaurants can have an off night); operating at this level and with high prices, one expects everything to be as close to perfect as possible. But even if the restaurant screws up everything else, it shouldn’t fail at one basic tenet: feed your customers, enough, and make them happy.