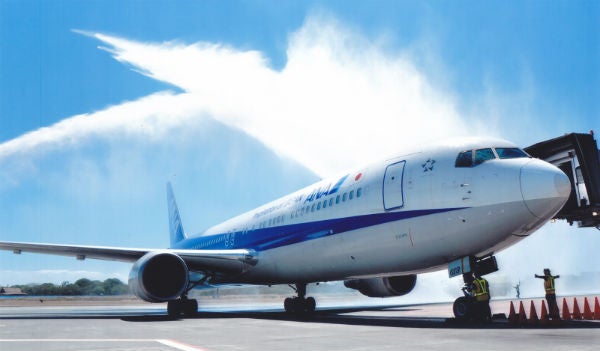 A water salute greeted All Nippon Airways' Boeing 787-8 Dreamliner at the Terminal 3 of the Ninoy Aquino International Airport to inaugurate Flight NH870, ANA's first fight from Manila to Tokyo.

Manila, Philippines – All Nippon Airways (ANA) formally presented the Philippines’ first permanently scheduled flights to Tokyo, Japan through the inauguration of the ANA NH 870 Manila – Haneda flight last March 30, 2014 at the Terminal 3 of the Ninoy Aquino International Airport. The introduction of flights from Manila to Tokyo is part of ANA’s 2014 summer flight schedule, the airline’s expansion of its network at Haneda Airport to connect Japan to several other destinations. This expansion, effective March 30, 2014, will make ANA the biggest airline carrier at Haneda, offering the most international flights to and from this airport.

All ANA flights via the Boeing 787 Dreamliner aircraft shall take off and land at the NAIA Terminal 3. Haneda Airport is easily accessible from Tokyo and this new flight schedule will make it easier and more convenient for Philippine-based passengers to travel to Japan and connect to other overseas destinations.

Through ALL NIPPON AIRWAYS’S global network, you can fly to many international and Japanese cities. Search for flights and book now at www.anaskyweb.com