Gigs that connect the past with the present | Inquirer Lifestyle ❮ ❯ 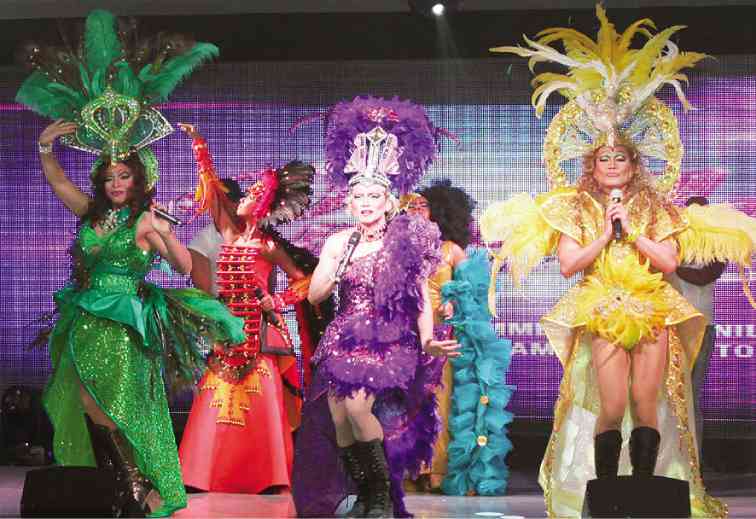 THE CAST of the musical “Priscilla, Queen of the Desert,” which opens May 9 at Resorts World Manila.

Gigs that connect the past with the present

The past and the present are always intertwined. Those planning their nights out will appreciate that reality better through these coming gigs:

Jerby Santo, a former radio DJ in Tacloban, Leyte, who was working in Cambodia when Super typhoon Yolanda struck Eastern Visayas on Nov. 8, 2013, is back in his hometown to help in rebuilding efforts.

He’s doing it the best way he can, by organizing a benefit concert to be held on May 8 at the Tacloban City Convention Center—also known as the Tacloban Astrodome, one of the few minimally damaged places that became an evacuation center for the storm survivors.

Produced by the International Organization for Migration (IOM) with the European Commission for Humanitarian Aid (Echo), the concert, dubbed “Padayon, Tacloban!,” will feature the following artists: Gary Granada, The Jerks, and Tres Marias from Manila; and Repapipz, Kulahig, La Famila, Succubus, Jay-D, and New Riddim Show from Tacloban.

Santo says that holding the gig at the Tacloban Astrodome symbolizes the Taclobanons’ rise from the rubble of Yolanda’s devastation.

It would be great if international and local tourists who have been going to Leyte to help the province can make it to the benefit show.

Resorts World Manila (RWM) is mounting its own production of the international musical “Priscilla, Queen of the Desert,” starting May 9 at RWM’s Newport Performing Arts Theater.

Adapted from Australian director and screenwriter Stephan Elliott’s 1994 film “The Adventures of Priscilla, Queen of the Desert,” the stage version, also written by Elliott with Scottish screenwriter and producer Allan Scott, is about two drag queens and a transsexual contracted to perform a drag show at a resort in Alice Springs, a resort town in the Australian desert. They encounter strange characters, as well as incidents of homophobia.

Aside from insights on sexuality and alternative lifestyles, the show’s biggest come-on has got to be the music, a mix of R&B and disco including hits by Tina Turner, Cyndi Lauper, Donna Summer, Alicia Bridges, Gloria Gaynor, Peaches and Herb, among others.

Not just an oldies gig

It’s easy to dismiss this as just another boring oldies gig: The Righteous Brothers’ Bill Medley and The Platters’ Sonny Turner on May 9 at the grand ballroom of Solaire Resort and Casino.

But a closer look should interest not just old folks, but those who would like to understand why there was such a musical style as blue-eyed soul (The Righteous Brothers) and the black music genre that bridged Tin Pan Alley and early rock ’n’ roll (The Platters).

Medley is the other half of The Righteous Brothers duo (Bobby Hatfield died in 2003), while Turner is the last surviving member of The Platters.

The Righteous Brothers influenced the likes of Hall & Oates, which in turn became the idol of Pinoy bands like Side A.

The Platters served as the template of countless R&B/soul groups, which in turn led to the creation of K-Pop.

Public House is a new pub and late-night restaurant (H. V. de la Costa cor. Soliman Sts., Salcedo Village, Makati City; tel. 8886677) that features DJs spinning past and present music—the kind you surely would love to hear, because the guys playing it are walking libraries of the history of rock ’n’ roll.

One of them, DJ Edgar “Par” Sallan, holds court at Public House every Saturday; he has announced on his Facebook page, Par Satellite, the holding of “Jamie Reid: Punk Rock ’n’ Roll Weekends,” which debuted last night and will continue all Saturdays of May.

Imagine listening to DJ Par’s rare punk and New Wave records collection while gazing at the works of Reid, a British visual artist whose best-known works include the artwork on the Sex Pistols album “Never Mind the Bollocks, Here’s the Sex Pistols” and the singles “Anarchy in the UK,” “God Save The Queen,” “Pretty Vacant” and “Holidays in the Sun.”

Punk bands such as The Pistols, The Clash, and earlier, The Ramones, influenced Nirvana and other grunge bands. Without punk, there would be no emo.