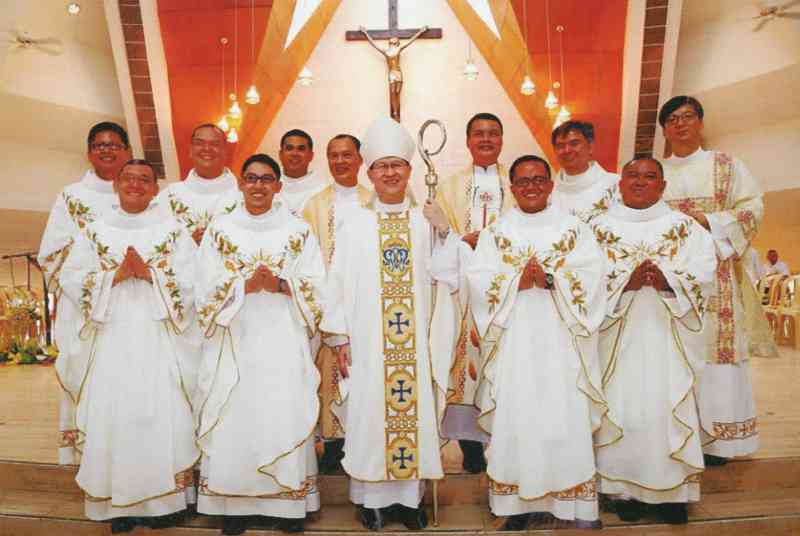 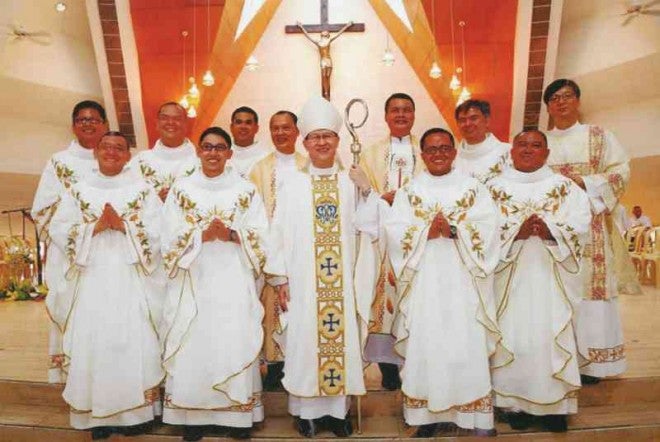 Since May 1, feast of St. Joseph the Worker, fell on a Thursday, the Catholic Church celebrates his feast today, May 4, the first Sunday of the month.

The newly blessed Capilla de San Jose in Antipolo del Norte in Lipa City is open for Sunday Masses. Blessed and inaugurated only last Dec. 29 by Manila Archbishop Emeritus Gaudencio Cardinal Rosales, the chapel sits on the property of businessman Danny Dolor, a short walking distance from the Parish of Our Lady Mediatrix of All Grace.

The statue was given in 1974 to Dolor by Msgr. Domingo Librea, then vicar general of San Sebastian Cathedral.

Dolor was walking around the cathedral when he stumbled into a bodega full of old and dusty statues.

One of them was the 13-foot statue of St. Joseph and the Child Jesus. It had been in the church since 1947 right after World War II.

St. Joseph’s statue was so huge and heavy that when Dolor asked if he can have it, Msgr. Librea said “yes” for as long as Dolor could carry it out of the church.

Dolor used a 6 by 6 truck to ferry the statue that had been sculpted by Ireneo Cristobal. He kept it in his house in Makati for 29 years until last year when he asked priest-architect Fr. Alex Bautista to design the Capilla de San Jose.

Since the chapel’s inauguration, buses of devotees of St. Joseph from towns of Batangas and from Metro Manila have been arriving in the chapel and praying to St. Joseph, the patron saint of workers.

I came to know about Blessed Mary Teresa of St. Joseph from seminarian Lynch Flores, who visited the Grave Chapel of the Carmelite Sisters of the Divine Heart of Jesus in Sittard, Netherlands, with Leandro Tesorero of the Work of the Saints Apostolate.

The founder of the Carmelite sisters was Blessed Mary Teresa of St. Joseph whose name was Anna Maria Tauscher. She was beatified by then Pope John Paul II on May 13, 2006.

She was born on June 19, 1855 in Sandow, Mark Brandenburg (now Poland). Maria grew up in an atmosphere of deep faith. Her father was a superintendent in the Lutheran Church. As a young girl Maria longed for a life totally consecrated to God.

On Oct. 30, 1888, Maria was received into the Catholic Church. Three years later, she founded a home for children in Berlint. Quickly, a group of zealous young women formed around her.

This was the modest beginning of a Congregation that, within only a few decades, spread to Europe and America—the Carmel of the Divine Heart of Jesus.

For prayers for intercession of Blessed Mary Teresa of St. Joseph, visit www.carmelitedcj.org.

Thanks to Gabriel Ma. J. Lopez, a product of Ateneo de Manila University, we have learned that the Society of Jesus in the Philippines has eight new Jesuit priests. Luis Antonio Cardinal Tagle ordained them at the Church of the Gesu in Ateneo on April 12.

He also said that his father and other volunteers went to Japan to receive the aid from Japanese Catholics for the restoration of the Cathedral.

Those who cannot go to Manaoag, Pangasinan, for the fiesta of Our Lady of Manaoag on May 7 can go to the Chapel of Manaoag on Sta. Teresita St. in Sampaloc, Manila, according to Jesse Nell, a devotee.

Fiesta Masses will be held at 5:30 p.m. The schedule: May 4, Fr. Prudencio T. Solomon Jr.; May 5, Fr. Chito Bartolo, OFM Cap; May 6, Fr. Eduardo C. Corozo; and May 7, solemn fiesta Mass, Fr. Emmanuel V. Sunga, rector and parish priest of the Archdiocesan Shrine of Our Lady of Loreto in Sampaloc.

Manila Archbishop Luis Antonio Cardinal Tagle recently inducted the new board of trustees of the National Sandigan Foundation led by Donnie Salvador as board chair and Teresita Sevilla as president. The induction was held at the Angels’ Hills Retreat Center in Tagaytay City.

Now in its 42nd year, Sandigan was created in response to the late Cardinal Jaime L. Sin’s call for the laity to be involved and support the various apostolates of the church.

Catch the Holy Masses at St. Joseph Church in Las Piñas today, as the parish celebrates the feast of “Tata Husep,” the miraculous patron of the town. Thanks to my friend Nolie Hans for introducing me to this devotion to Tata Husep.