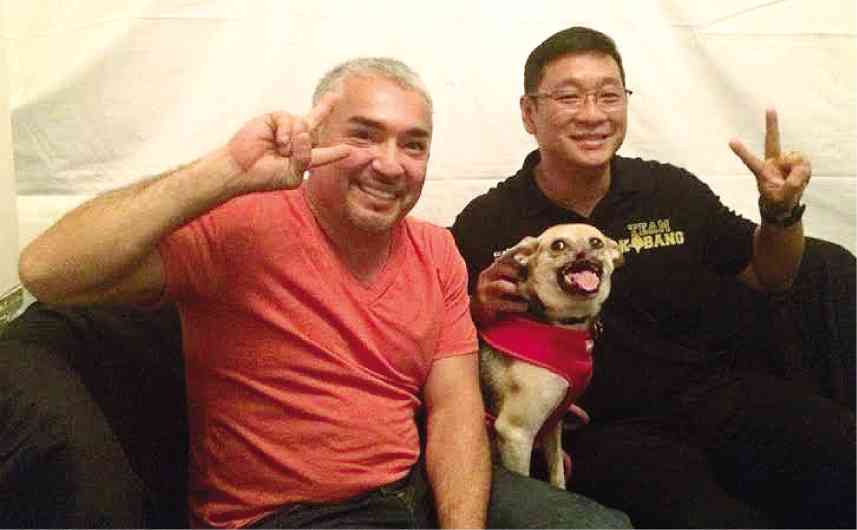 If we liked him, then he seems to have liked us back: Inquirer was thrilled to see our interview with the Dog Whisperer shared on his Facebook page, and registering over 15,000 likes.

Filipino fans were even more impressed when the dog behavior expert, animal rights advocate, and defender of much-maligned breeds such as pit bulls proved that he did walk the talk.

For one, Millan’s guests at his 8 p.m. show at the Eastwood Central Plaza last April 29 included rescued aspin from the Philippine Animal Welfare Society (PAWS). Also, before the show, Millan met backstage with members of Compassion and Responsibility for Animals (Cara) Philippines, guardians of the rescued Laguna pit bulls.

Cara had been inviting Millan to visit the dogs in their sanctuary, but his schedule was just too packed (he proceeded to Singapore and Hong Kong from here). Still, he sat, shared tips and posed with the group. “Of course,” Millan had replied during the April 28 press conference, when asked if he knew about the case.

After the Cara meeting, he left the venue, presumably to freshen up before the show, and caused a commotion as fans waiting to catch a glimpse of him in Eastwood waved and screamed. There were no dark glasses or gruff bodyguards, and Millan waved back.

Finally, Millan’s very special guest toward the end of his show was none other than Kabang, the hero dog who saved his young owners from being run over by a tricycle—an accident that ripped off the dog’s snout.

Kabang’s case became so well-known that, according to veterinarian Dr. Anton Lim, donations were received from 46 countries, which went to Kabang’s medical treatment.

Millan could also be an inspiration for others in his personal life, which we would have loved to ask about, had we had the time (we only had a few minutes for a one-on-one interview). In 2010, Millan was hit by the triple whammy of the death of his beloved pit bull Daddy, his divorce from wife, Illusion, and the shock of realizing “I didn’t own anything” and was almost bankrupt, he revealed in an interview with Men’s Journal’s Jason Fine in March 2013.

In fact, he actually popped some pills in a botched suicide attempt, and had to be kept in a psychiatric ward for three days. “Nothing happened!” he told Men’s Journal. “I thought, well sh*t, that means I’m not supposed to die. I better get back to work.”