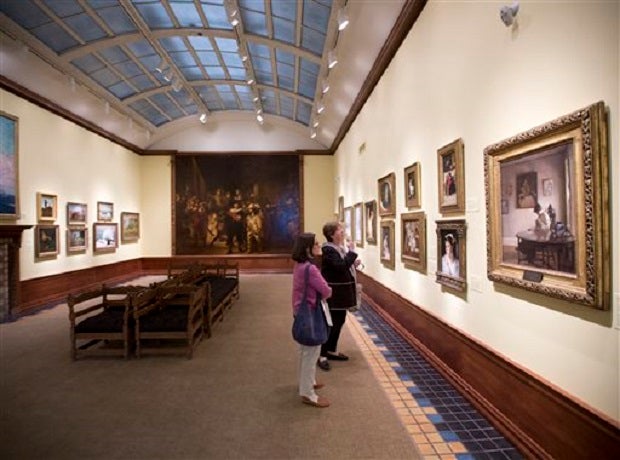 This May 2, 2014 photo shows Regina Bryde of Delmar, N.Y., left, and Sara Holmes of Syracuse, N.Y., viewing paintings at the Arkell Museum in Canajoharie, N.Y. The museum, started in 1928 by Bartlett Arkell, founder of the Beech-Nut food company, is located next door to company’s former plant in Canajoharie, population 2,200. AP

CANAJOHARIE, New York—Winslow Homers in the shadow of a defunct Beech-Nut baby food plant. A Rembrandt, Picasso, Rubens and Renoir up the hill from a paper mill. The founder of the Hudson River School vying for attention amid baseball memorabilia and old farm machinery.

There are plenty of treasures to be found among the collections of lesser-known, off-the-beaten-path art museums dotting upstate New York. But they’re well worth the trek for anyone looking for great art in unexpected places, whether it’s the rolling, bucolic countryside typical of many areas or the industrial grittiness of riverside mill towns.

This June, the Fenimore Art Museum in Cooperstown is opening an exhibit of about two dozen rarely seen works by American painter Winslow Homer, including 21 on loan from the Arkell Museum in Canajoharie, on the Mohawk River 45 miles (72 kilometers) northwest of Albany. The Arkell Museum, started in 1928 by Bartlett Arkell, founder of the Beech-Nut food company, is located next door to company’s former plant in Canajoharie, population 2,200.

“You don’t expect this type of collection in a small town like this,” said Diane Forsberg, the Arkell’s director and chief curator.

The Fenimore’s Homer exhibit, running from June 6 to Aug. 24, will be the first time the Arkell’s entire collection of the acclaimed the 19th-century painter’s work will be displayed at the same time. Two other Homer works, one from a private collector and the other from the Metropolitan Museum of Art in Manhattan, will also be part of the exhibit.

“He’s an artist who doesn’t seem to go out of fashion,” Fosberg said.

“If you’re an art lover, Winslow Homer is on everybody’s top five list of American artists of all time,” echoes Paul D’Ambrosio, the Fenimore’s CEO and president.

For the Fenimore, it’s an opportunity to draw attention to the breadth of its own collection, which includes works by Hudson River School founder Thomas Cole and American folk artist Grandma Moses, as well as the Thaw Collection of American Indian Art. The Farmers Museum across the street and the nearby National Baseball Hall of Fame of Museum attract larger crowds in Cooperstown, but the Fenimore gets its share of visitors during the busy summer months.

“We have a pretty good faithful audience, but you’re always finding people who come to the area who didn’t know we existed and think of us as a hidden treasure,” D’Ambrosio said.

In Glens Falls, a city of 14,700 on the upper Hudson River, The Hyde Collection has been surprising visitors for years with its stellar roster of works by Rembrandt, Rubens, Van Dyck, Degas, Picasso, Renoir and other prominent painters from the Old Masters to contemporary artists. The museum is split between a modern wing and the early 20th century Italian palazzo-style Hyde House, the mansion home of Charlotte Pruyn Hyde and her husband Louis Fiske Hyde, owners of the Finch, Pruyn paper mill just down the hill from the museum.

The Hydes began collecting art during trips to Europe in the early 20th century, and by the time Louis Hyde died in 1934, they had amassed a significant amount of artwork, including Rembrandt’s “Christ with Arms Folded.” After Charlotte Hyde died in 1963, the Hyde mansion was opened as a public museum. Well before then, the family was known for welcoming the blue-collar community to its home and its lush grounds for public art and social events.

“The Hydes used their enormous wealth to buy art, but they were really interested in sharing it with their employees and the people in town,” said Charles Allan Guerin, the museum’s director.

Like the Arkell and the Fenimore, the Hyde seems to be “rediscovered” every few years — and likewise welcomes the renewed interest.

“It’s actually kind of flattering,” Guerin said. “We don’t mind that at all.”

In western New York, Buffalo’s Albright-Knox Art Gallery is well-known for its wide-ranging collection of works by such artists as Vincent van Gogh, Paul Gauguin, Jackson Pollock, Andy Warhol and Jasper Johns. But the nearby Burchfield-Penney Art Center, located on the campus of Buffalo State College, has emerged as a must-see for art lovers. Named for acclaimed watercolorists Charles Burchfield and Buffalo-born lawyer and art collector Charles Rand Penney, the museum is home to the largest collection of Burchfield works. His art has been exhibited in recent years at the Hammer Museum in Los Angeles as well as the Whitney Museum in New York City.

After Burchfield’s death in 1967, President Lyndon B. Johnson eulogized him as “artist to America.”

For fans of Western art, two museums at opposite ends of the state offer visitors some of the genre’s best collections to be found east of the Mississippi. Corning, in the Southern Tier near the Pennsylvania line, is home to the Rockwell Museum of Western Art, while Ogdensburg, on the Canadian border in northern New York, lays claim to the Frederic Remington Art Museum.

Remington, a native of nearby Canton, is best known for his work depicting cowboys, ranch life, soldiers and American Indians in the last decades of the Old West. A collection of his sculptures, oil paintings, family possessions, personal art collection and studio contents is housed in a 200-year-old house his wife moved into after Remington’s death in 1909. The museum’s current exhibits include displays in two galleries of Remington’s masterwork paintings, illustrations and bronze sculptures.

The Rockwell Museum traces its origins to Robert F. Rockwell, Jr., born in Bradford, Pa., but raised on his family’s cattle ranch in Colorado. Growing up with cowboys led to his collecting Western art while running his family’s businesses, which included a chain of department stores in western New York towns. In a few years he had built a major collection that included works by Remington, George Catlin, Charles M. Russell and Albert Bierstadt. Originally exhibited in the Rockwell’s flagship store, the collection eventually found a permanent home in Corning’s Old City Hall in 1983.

Current exhibits include displays of more than 100 pieces of Southwest pottery from the Nancy and Alan Cameros Collection, and the Rockwell’s own collection of 19th-century German painter Karl Bodmer’s hand-colored engravings based on his original watercolors of images from a trip on the Missouri River in the 1830s.