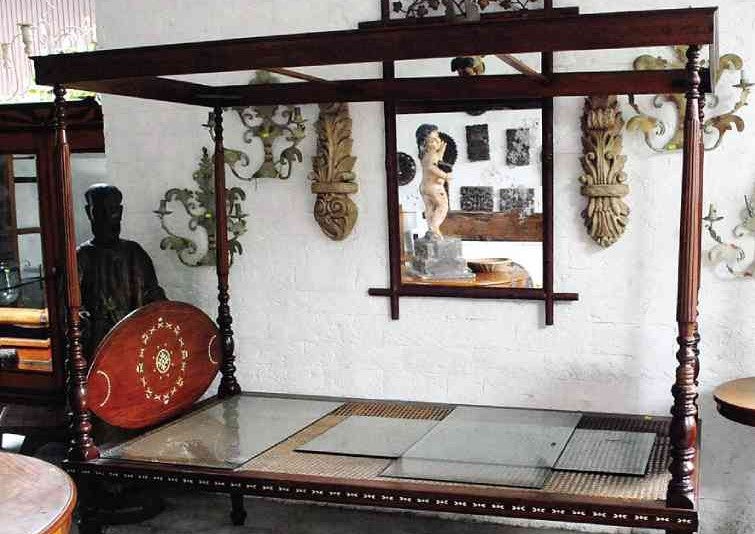 Girl friends open their own version of a ‘nice Bangkal’

Every object had a tiny neon yellow sticker: the carved wood mirror, the glazed console beneath it, the matching wood sculptures atop the table, the low alabaster pedestals that flank the console, even the small angel figurine on the floor.

You’d find that, as you go through the house, all things bore the same sticker. On closer inspection, you’d see that each one carried a price tag.

Everything in the house but the house itself—an old, nondescript bungalow on a quiet street in a gated Makati village—is for sale.

6 Planet, so named after the house’s street address, opened quietly for business a few weeks ago.

It now has hundreds of collectors’ castoffs—a wild mix of furniture, artworks, home décor, dinnerware, glassware and whatnot, many of them vintage and all pre-owned.

Think of it as an estate sale, though one of the business owners calls it a “glorified garage sale.” The other describes it like “a nice Bangkal,” referring to that street in Makati City where you find a row of stores selling cheap furniture, vintage items and antiques.

The house itself was set to be torn down, says Erica Concepcion-Reyes, but she asked her aunt, the owner, if she and a group of friends could use it for the business venture they hatched after a get-together during the Christmas holidays.

“We were simply talking about unloading things and doing a sale,” says Trish Chua-Juico, editor of Metro Weddings. “Like, Erica and her husband Francis just moved to a new home and they had a lot of accumulated stuff  which they needed to get rid of.”

A lot to unload

Concepcion-Reyes, who’s a jewelry designer, says the things from their old condo no longer suited the look of their new place. As it turned out, their other friends also had things to unload.

“We just wanted a place where we could sell all these things so that we could buy new things, as well,” says Concepcion-Reyes. “We’ve found that it takes too much effort to sell on your own per piece worth P200, like plates. If it’s a large object, fine, but those small pieces, that takes work.”

Her husband Francis, a banker, is an art collector, with friends who are always looking to unload because they wanted to buy new things. “It’s a never-ending cycle,” she says wryly.

It took the group of six friends—the women’s husbands are barkada—only a week to set up the place, gathering the goods, arranging the pieces in the house, and installing air conditioning.

“We didn’t want to set it up like a store, because they’re home pieces, and we wanted to give people an idea of how the pieces would look in their own homes,” Chua-Juico says.

6 Planet is not a store since it’s located in a residential village. (They’re open six days a week. For appointments and directions, call 0949-3722102.)

They tapped the help of a collector friend, who’s into interior design, to put order in the inventory; he arranged the items like they were in a real home, from the sofas to the chandeliers to the dining sets.

The friends admit that even they were overwhelmed with the amount of stuff that arrived at 6 Planet. There are chandeliers hanging even from the kitchen ceiling. The maid’s quarters are repositories for the odd chair or décor. The larger items have spilled over to the outdoors, with cabinets in the backyard as well as outdoor furniture. There are  kalesa wheels resting on the front yard.

“You’ll be surprised, but these are just from a handful of friends,” says Concepcion-Reyes. Ten friends, to be exact.

Given the limited space, items are carefully selected and curated.

“We also want to make sure that they’re not bringing in fake pieces, especially for the artworks,” Chua-Juico says. “We don’t authenticate, but Francis has an eye. He’s knowledgeable so we put him in charge of that.”

“And price has to be good because it’s just like a glorified garage sale,” adds her partner. Customers will find pieces priced as low as P200. Some paintings or a big dining table might fetch between P50,000 and  P65,000.

Price notwithstanding, they’ve found that customers find treasures in other people’s junk. A buyer snapped up a woven basket for P2,000. When the women asked why the basket seemed so special, the buyer told them it was by a Japanese master weaver whose works fetch from P40,000 apiece. The basket had a signature detail in it.

There is such an allure to the hunt that even these women have been snapping up some of the pieces that catch their fancy.

Prices aren’t fixed for the big-ticket items. Customers can negotiate; their offer will be referred to the consignee.

6 Planet doesn’t restore the merchandise; they’re sold exactly as they come in, with nicks, wear and imperfections. Some of the items may be prototypes or catalog pieces for items that were intended to be exported to Europe and other countries.

“But unlike Bangkal, we fix them up here,” adds Concepcion-Reyes. “People are comfortable when they come to look at the pieces.”