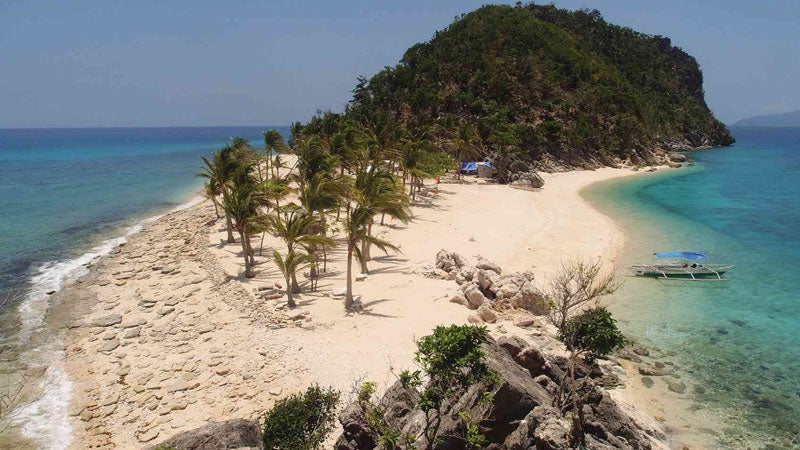 Paradise found on islands of giants

CARLES, Iloilo—Despite its name, travelers won’t find any giant in this group of islands in northern Iloilo.

According to folklore, Islas de Gigantes got its name from the inhabitants who once roamed the islands and were about nine feet tall. The folk belief is seemingly supported by the sight of large wooden coffins found on the island that some locals say were used by the early settlers.

But more than the mythical stories, Gigantes Islands has drawn an increasing number of travelers with its isolated and pristine white-sand beaches and coves, crystal-clear waters, majestic rock formations, storied caves and other attractions.

It has been described as Iloilo’s “hidden paradise getaway” even as its fame continues to grow in recent years.

During the recent Holy Week, some 500 tourists flocked to Gigantes Norte, the main jump-off point in exploring the islands. The number represented a leap from the hundred or so visitors in previous years.

Most of the tourists had to stay in tents because there were not enough rooms to accommodate them, according to Josephine Decano, resort manager of Gigantes Hideaway, one of seven resorts on the islands.

“There has been a marked increase in the number of guests, mostly because of accounts from those who have been here,” Decano said.

Gigantes Islands lies 21 kilometers northeast of Carles town proper, which is about 145 km from Iloilo City. It includes 10 islands, the biggest of which are Gigantes Norte and Gigantes Sur that have two villages each.

Although part of Carles, Gigantes Islands is more accessible from the neighboring town of Estancia. Trips to the islands on outrigger boats take from two to two-and-a-half hours depending on sea conditions.

Tourists taking the regular trips that arrive late in the afternoon in Gigantes Norte are advised to spend at least two nights and three days, including travel, to explore the main attractions of the islands.

Resorts usually assign a group tour guide for spelunking and island-hopping. The guide also attends to the other concerns of guests, including meals.

The first stop on a three-day, two-night tour is a late afternoon trip to the Gigantes Norte Lighthouse in Barangay Asluman at the northern end of the island.

While the original lighthouse had been replaced with a modern solar-powered one, the original building believed to be from the Spanish era has been preserved.

The lighthouse provides one of the best spots for a panoramic view of the sea at sunrise and sunset.

The second day of the tour can be spent island-hopping on a rented motorboat arranged through the resort that can also provide a packed lunch based on the guest’s choice of seafood.

An early morning exploration of Bakwitan Cave, one of the numerous caves on the islands, can kick off a day of exploration and adventure.

So named because it was used as bakwitan, or an evacuation site and refuge by residents fleeing Japanese soldiers during World War II, the cave also served as shelter for families when Super Typhoon Yolanda struck in November last year.

The cave, however, is replete with sharp stones and steep areas, so tourists are advised to get a guide to help them explore the area, and wear hiking shoes. Flashlights are also a must.

Despite years of treasure-hunting activities, shards of pottery believed to be centuries-old can still be found inside the caves, along with human bones as the caves are believed to have been ancient burial grounds.

The cave exploration is moderately difficult and can take up to two hours, especially if one opts for the longer and harder route. The longer route involves crawling on the cave floor and through small openings, as well as maneuvering over sharp and steep rock formations.

The more adventurous are treated to a spectacular view of rock formations and lush vegetation from the cave’s exit.

After exploring the cave, tourists can cool off with a short dip at Bantigue Island Sandbar, which is accessible only during low tide.

The next stop is Cabugao Gamay Island, considered the most photographed among the islands’ attractions because of its postcard-like view of rock formations, white-sand beach, lush trees and clear waters.

Climbing the rock formations all the way to the top affords one the best spot for viewing and taking pictures of the whole islet.

Just a few minutes by boat from Cabugao Gamay is the Tangke saltwater lagoon nestled between towering rock formations. Here, one can swim in the cool waters, dive from the steep rocks and marvel at the massive columns.

On less crowded and quieter times, monkeys can be spotted peeking from, and climbing over, the rock formations.

From the lagoon, the daylong tour can end at Antonia Beach, which is popular for its two long and parallel stretches of white-sand beach. The islet is also a favorite spot for snorkeling, camping and other beach activities.

First-time travelers to Gigantes Islands should be prepared to rough it, as accommodations are adequate but spartan. Resorts usually offer native huts with an electric fan and mosquito nets, if needed.

A generator provides electricity only from 6 p.m. to 6 a.m.  The only way to get around the island is by passenger motorbike.

And cell phone and Internet connections are almost totally nonexistent on Gigantes Norte.

Fortunately, there’s what the locals dub the “calling center,” a hilly area in Barangay Granada where one can pick up network signals and send text messages, make calls, or go online.

Islas de Gigantes has also become popular among budget travelers and backpackers because of the relatively cheap cost of getting to the island, and its reasonably priced accommodations and food.

Freshly harvested scallops in various preparations (sizzling, grilled, breaded or baked) cost from P159 to P170 per kilo. Other seafood and fruits are just as affordable.

Like other islands in northern Iloilo, the Gigantes group of islands is still recovering from the devastation brought by Yolanda, with most residents losing their houses and fishing boats.

Despite that, Gigantes Islands remains largely unblemished. Its mystic and allure beckon to travelers seeking tranquility and communion with nature.

Take the plunge for free on ‘island of fire’