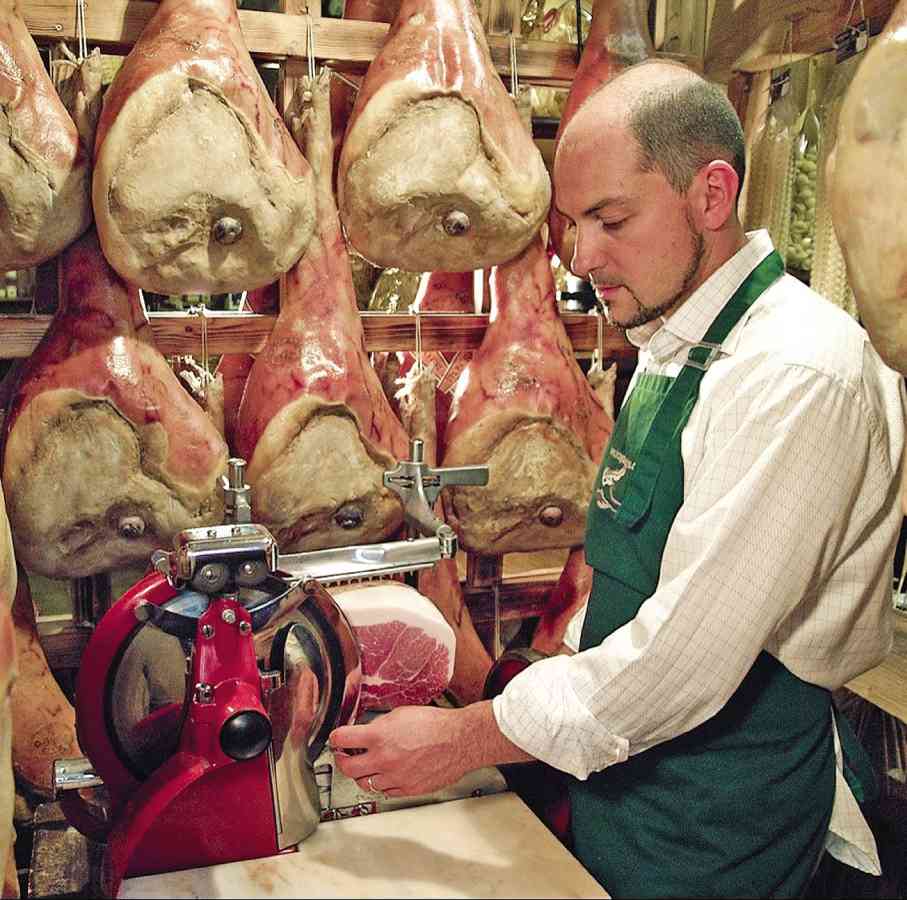 Prosecco, ‘prosciutto’ and spring water–Italian treats that sate and ‘heal’

I met Signor Adriano Steffanuti and his business partner, lawyer Gale Atienza, a few months back. I was introduced to them by master baker Johnlu Koa during one of our enjoyable food and wine tasting sessions.

Since then, I have been enjoying some of Italy’s finest treats: Foss Marai’s Prosecco Strada Di Guia Brut (one of my favorite proseccos, just a tinge fruity, and when chilled it is thirst-quenching, crisp, refreshing ); their selection of Chiantis; Papi (a sweet, sparkling wine made from the moscato grape, a favorite of all non-drinkers); Fiuggi Water; Ronco (my favorite cooking wine that’s very reasonably priced, excellent to cook with and a decent drink); Massimo Trulli handmade leather bags and wallets, and the overly delectable prosciutto di Levi San Daniele del Friuli.

Thanks to Adriano and Gale, I am broke and fatter, but happier!

The ham legs they import come cut in three parts and are boneless (boned without pressing), leaving the meat soft and springy to the touch. Sliced thinly, it melts in your mouth. The ham is delicately sweet, well rounded and very moist. You can’t have enough of it. Paired with sweet, chilled melon or just by itself, it is truly fantastic!

According to Gale, they now refrain from bringing in whole legs as they did initially because of problems with shelf life. Plus, with the bone intact, the shipping cost was higher.

Now, they have the liberty to sell portions of the leg (each portion weighing close to three kilos each), and their clients don’t have to worry about leftovers.

Levi Gregoris is a Friulan artisan who learned the ancient secrets to prosciutto-making from his father. His family owns Bottega del Prosciutto, a historical shop that first opened its doors in 1890 in the town of San Daniele. The Bottega sells wine, specialty Italian food and, of course, prosciutto.

The day I tasted this particular San Daniele, I phoned Adriano and asked him a barrage of questions about the food. Since he was leaving in a few days, he asked Levi to answer for him.

“Prosciutto is a dry-cured Italian ham that is usually thinly sliced and served uncooked. Internationally famous and often associated with prosciutto di Parma (Emilia Romagna Region) and prosciutto di Norcia (Umbria Region), the prosciutto San Daniele (Friuli Region) is covered by a Protected Designation of Origin by Italian and European Union legislation. For all three, the product specification prohibits additives such as nitrite and nitrate,” said Levi.

The San Daniele difference, added Levi, has to do first of all with the origin of the raw material. The thighs must come exclusively from pigs bred in 10 regions of Northern Central Italy.

“Secondly, there’s respect for the production method inherited from an ancient tradition. Since any form of freezing of the meat is forbidden, the fresh thighs must rapidly reach the small hilltown of Friuli, San Daniele, to set in motion a production process that recreates the natural rhythm of the seasons, using sea salt, without the addition of chemical additives or preservatives,” he said.

“Nature lends a hand,” he added. “A vital element is the good air that prevails here, where the winds that descend from the Carnic Alps meet those coming from the Adriatic. The secret is now unveiled, captured in a technical term—the microclimate.”

Levi’s edge is that he uses only locally raised pigs (from Friuli), using an ancient production method taught to him by his father. His prosciutto is produced by the hundreds, unlike other producers of the area who produce by the thousands. This allows him to tend more carefully to his products.

Mince the prosciutto coarsely and brown in butter; add the cream and mix well. Cook and drain the tagliolini and add to the pan with the sauce. Arrange a slice of prosciutto on the plates and place a nest of tagliolini on top. Garnish with poppy seeds.

Can water from Fiuggi truly heal?

CNN had an interesting feature on the famed Italian spring water, which is said to have curative properties.

According to the literature sent to me by Adriano, who is also the water’s exclusive distributor in the Philippines, “the curative properties of Acqua Fiuggi have been renowned since the 13th century. Pope Bonifacio VIII then and Michelangelo Buonarroti later on have testified to its depurative properties and capability to dissolve urinary stones.”

Michelangelo wrote in a 1549 letter to his nephew Leonardo: “I have drunk, night and day for two months, the water from a fountain which is located 40 miles away from Rome, that bursts the stone; and this broke mine and I urinated a large part of it. I must store a large amount of it at home and neither drink nor cook with any other water and live a life different from the one I am used to.”

Does it really work? I don’t know, but I just had to inform you about what this water can do. You may contact Signor Steffanuti for the studies made on it.

As for me, I’ve served it many times during my catering and people have oooh-ed and ahhe-ed over it, especially after you tell them the Fiuggi tale of the Pope and Michelangelo.

But if it doesn’t work, just remember that everyone benefits from a glass of water, especially one as pure and as sublime as this.

Therapeutic dose: On an empty stomach, take one liter per day of Fiuggi the first week, and two liters per day the second week for a single cycle.

Fiuggi water is available in sparkling and still versions.