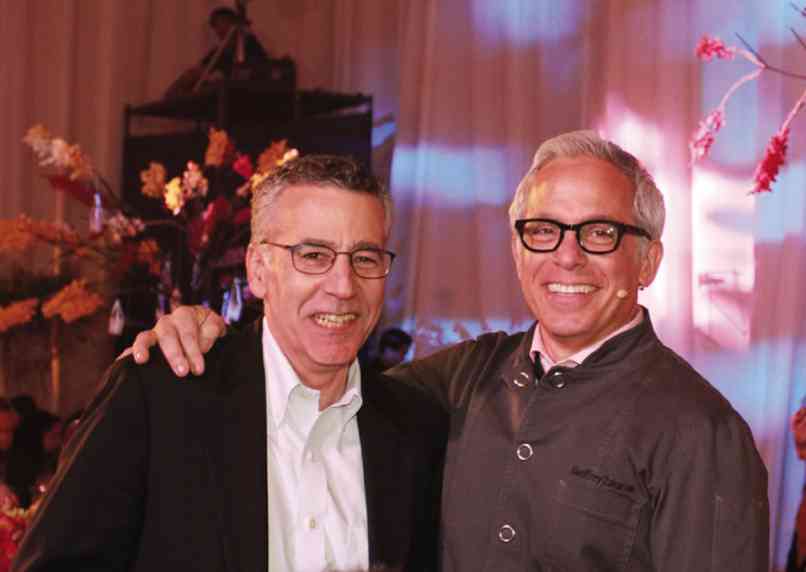 US AMBASSADOR to Philippines Philip Goldberg and Geoffrey Zakarian

With many restaurants across New York and Europe banning food photography inside their establishments, we had to ask restaurateur, author and “Iron Chef” Geoffrey Zakarian what he thought of taking pictures of what we eat.

“Obviously, it’d be nice if you didn’t use the flash and disturb the other guests. That’s just decorum. It’s like not yelling while you’re on a cell phone. If you’re polite, I think it’s wonderful. Imagine, you can transport a photo over Twitter and other social networks, to millions of people and they will say,  ‘Where is that? That looks great. I wanna go there.’ That’s gold for restaurateurs, why wouldn’t you want that to happen?”

“Any event that benefits the victims of a catastrophic event like Supertyphoon ‘Haiyan’ is a good thing,” says Geoffrey.

Coming to the Philippines was a natural choice for him, especially since many of his employees are Filipino, right down to the woman he credits for raising his children.

Geoffrey says, “Employees in my restaurants are Filipino. I remember meeting them in a room and it struck me that everybody was incredibly happy and they just kept smiling the entire time I was there, in the two hours we got to know each other. It’s amazing because they come to work happy, they go home happy, when they’re working they’re happy, they’re so knowledgeable and they love food, so coming here was very natural. I’m grateful that I was brought here.”

As for the woman who helped Geoffrey and his wife raise “calm babies,” he credits “a wonderful woman named Anna Cruz. She has four sons, and they’re all surgeons. She took care of our two children and showed us how to raise a baby, they’re all calm, they sleep at night, they eat well, and it’s all because of Anna.”

He adds: “And she cooked every single day in our house… adobo… She had a huge array of recipes but the two ones I liked the most were the pork and the chicken.”

In fact, Geoffrey loved the adobo he was served at home so much that he created his own take of the dish for the gala dinner.

His version, which he calls the Adobo-spiced Pork Belly, was cooked “slow and low” on a combi oven for 17 hours.

The glaze he created for the pork belly was a mixture of tomatoes, vinegar, cumin, cinnamon, cloves, cocoa and chili.

“I would like to say it’s a Filipino version of a barbecue sauce, or molé,” Geoffrey says. “What I’ve noticed from eating food here is the incredible range of vinegar used. I really appreciate vinegar; vinegar is balance.”

During his brief stay, Geoffrey was also able to try lechon at Cirkulo, which he loved, and sigarilyas, which were “amazing,” and vowed to eat as many mangoes as he could before returning to New York.

“We don’t get these kinds of mangoes in the States. I had one every morning and I’m going to get as much as I can before I go,” he says.

To know more about Cignal and its channels, visit www.cignal.tv.