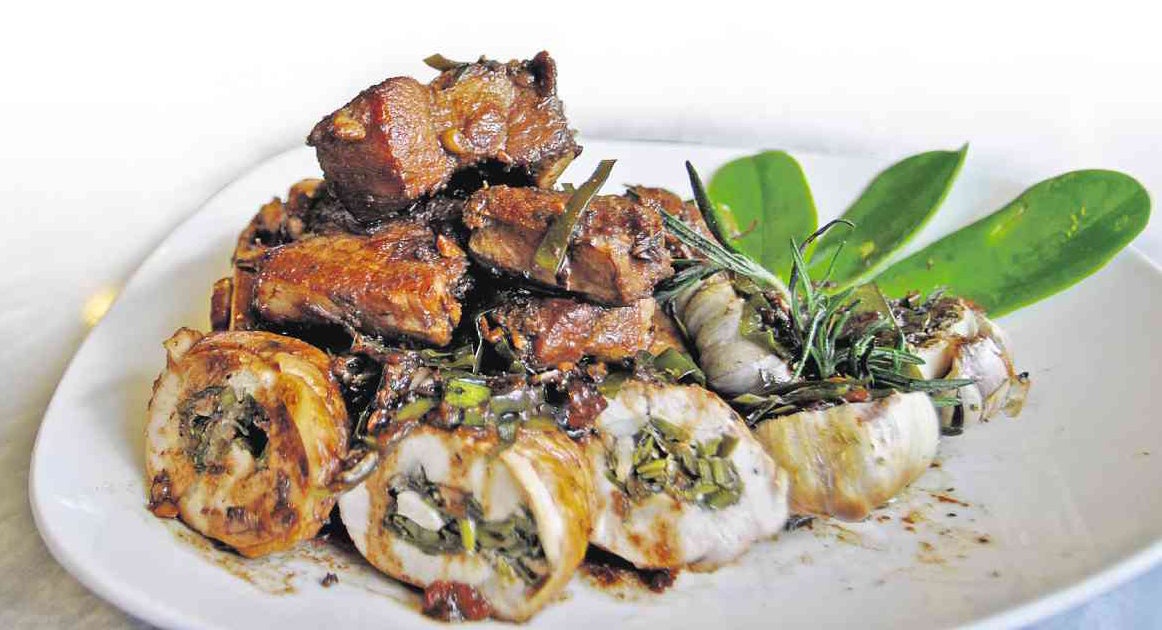 If Cebuanos stuff lechon (roast pig) with tanglad (lemongrass), the Ilocano style is to put in a native plant, karimbuaya, into the pork dish and other grilled dishes.

Karimbuaya  (scientific name: Euphorbia neriifolia linn) is a plant that grows abundantly in northern Luzon, particularly in Ilocos Sur. The cactus-like plant has fleshy, oblong-shaped leaves and grows almost into a big tree with stubby thorns. It is also known as soro-soro in Tagalog.

It is used in grilling meats, including lechon. To Ilocanos, no lechon is complete without karimbuaya. When combined with herbs and spices, karimbuaya lends the lechon a distinct taste and aroma—tangy, mildly spicy, full-bodied and with a slight salty-bitter taste. The milky sap of the plant, which is said to be medicinal, also helps remove the unpleasant odor of meat and fish.

Kristine Singson-Meehan grew up eating Ilocano dishes flavored with karimbuaya. Her exposure to karimbuaya allows her to use it in most of her dishes, too—stuffing for roasted chicken and porchetta (tender and juicy pork belly with ultra-crispy skin that gives off a crazy, crackling sound after each bite).

One dish that elicits a lot of enthusiastic reaction from family and friends is her Karimbuaya Chicken and Pork Adobo. It’s a gourmet-ish adobo using chicken thoroughly seasoned and baked before serving and flavored with karimbuaya.

“It’s a different take on adobo,” says Singson-Meehan, who hails from Candon, Ilocos Sur. “When fused with the usual adobo mixture, it gives off a lemony, slightly tangy taste. In a way, karimbuaya adds saltiness to the adobo.”

Singson-Meehan uses only native sukang Iloko (brown type), shallots (lasona) and the small Ilocano garlic in her adobo. She sears the pork and sautés it in garlic, shallots, bay leaf, pepper and water. She lets it boil and adds the vinegar. Karimbuaya is added last.

“I put in karimbuaya last so as not to dissipate its flavor,” says Singson-Meehan, chief executive officer of Artstream Hospitality Management Group, which runs and manages Hotel Rembrandt, Le Monet Hotel in Baguio City, Hotel Luna in Vigan, and Vitalis Resort and Spa in Ilocos Sur.

“I add karimbuaya only after letting the soy sauce and vinegar cook through,” she notes.

The chicken fillet is seasoned with shredded karimbuaya and adobo sauce, rolled and baked to perfection.

She gets her regular supply of karimbuaya from Candon.

Singson-Meehan prefers her adobo light, without too much soy sauce. But, Karimbuaya Chicken and Pork Adobo has a thicker sauce, with good texture provided by the chopped plants that swim in the meaty sauce.

When in the mood, she adds chicken liver or chicken heart. She prepares the dish with dinengdeng or baradibod (vegetable stew).

Singson-Meehan has four children with Australian husband Anthony who runs their Dinelli processed meat business. Both finished culinary and hotel management at Les Roches in Switzerland.

After getting her diploma from Les Roches in 1996, she helped put up Hotel Rembrandt and later opened other hotels and invested in various restaurants with good friends.

“I’m more into management than running the kitchen in our business,” she says. “But, at the end of the day, I get the final say on the menu.”

Sear pork until brown, then sauté shallots, garlic, soy sauce, pepper, laurel and add water. Let it boil until tender. Add sukang Iloko to the sauce. Do not stir when vinegar is added. Simmer for five minutes. 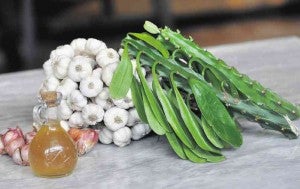 For the chicken: Flatten chicken fillet and add a pinch of salt and pepper. Add the minced karimbuaya and adobo sauce inside the fillet. Roll fillet and secure with thread to keep chicken intact. Bake chicken for 30 minutes at 350 degrees Fahrenheit.

Together with chicken, bake the sliced whole garlic. Add olive oil and rosemary fresh or dried leaves to the garlic. Bake for 10-15 minutes.

Arrange chicken and pork adobo in a platter, topped with karimbuaya adobo sauce. Garnish with baked garlic and rosemary.