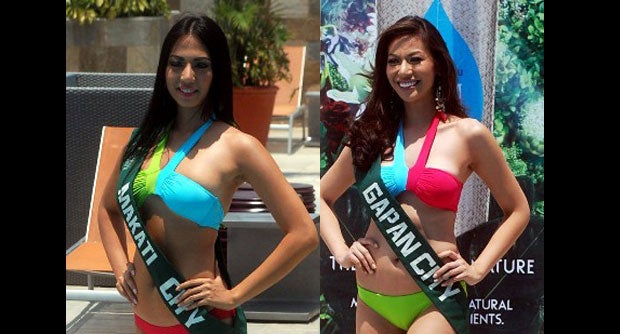 Makati’s Mary Ann Ross Misa and Gapan’s Maria Paula Bianca Paz are two accomplished figures in the national pageant circuit who aim to add more feathers to their caps via the environment-centered competition.

“The battle is not over. There is always something good to look forward to, something exciting on the coronation night on May 11,” Misa told Inquirer Entertainment at the sidelines of the press presentation held at the Solaire Resort and Casino in Parañaque City last month.

The two ladies have also made it known that they are serious about this competition. Both of them were among the 10 representatives awarded the “Miss Hana Shampoo” title by the pageant’s co-presentor.

“The Ross now in front of you has more eagerness. It’s all or nothing for me. I learned a lot from the past pageants, in Bb, Pilipinas and Miss World Philippines and MWP. This is a different ball game. I am still my self, but I learned from my flaws before. I’m still a work in progress. I am not a quitter. I believe there is no desperation in chasing your dreams,” declared Misa.

Paz, meanwhile, noted she is “much more relaxed this time. Last year there was a lot of pressure being third princess [in Miss World Philippines]. I am here more for the experience and I’m enjoying it. We’re very active. We have a lot of activities, interaction with children and communities that I didn’t have much of before.”

Misa said, “My experiences taught me a lot. I use the criticisms to push me to do better, not only as a candidate but also as a person. I cannot please everybody. This is a tough world and people say things to pull you down. That is the lesson I am imparting to everybody here in this competition. Nobody’s gonna push your back but your self and your family. My mom and my true friends are pushing me. I can’ promise to win, but I will do my best to make them proud.”

She added: “It is my dream to represent the country in the international arena. I hope to bring pride to our country and become the second Filipino to be proclaimed Miss Earth when the international competition is staged in November or December. That fire in me is still strong.”

The two ladies are joined in the 2014 Miss Philippines-Earth pageant by fellow Bb. Pilipinas alumnae Patrixia Shirley Santos of Daraga who joined in 2010, Ana Czarina Buenviaje of Malinao who participated in 2012, and 2013 contestants Anna Carmela Aquino of Taytay, Maria Bencelle Bianzon of Dueñas and Mary Rose Pujanes of Santo Tomas.

The 2014 Miss Philippines-Earth coronation night will be staged at the SM Mall of Asia Arena in Pasay City on May 11, 7 p.m., and will be televised by ABS-CBN on the same evening.

The Philippine Daily Inquirer and Inquirer Libre are official media partners of the pageant.