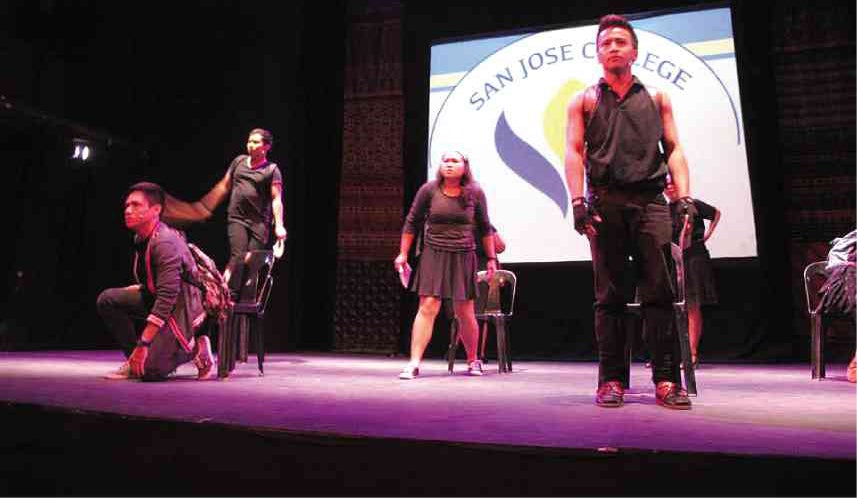 CAST OF the upcoming “Florante at Laura Remastered” performing an excerpt from the play at Peta’s 47th theater season launch. PHOTO FROM FACEBOOK.COM/THEATERFANSINMANILA

Peta goes ‘from local to global’

Francisco Balagtas and Anton Chekhov will highlight the 47th season of the Philippine Educational Theater Association (Peta), which opens in July. But first, pop-rock music will again serve as the clarion call, and then an international partnership will be launched.

“The theme is different forms of adversities, different forms of people,” says Peta artistic director Maribel Legarda. “Every season we have two new plays, and for this season these are ‘Florante at Laura Remastered’ and an adaptation of ‘The Cherry Orchard.’”

The takeoff on Balagtas’ (Francisco Baltazar) poetic masterpiece was written by Anj Heruela and will be directed by Ian Segarra. It is a “Balagtasan battle” between two aspiring writers—Victor, a student at a private school, and Ronvert, a street vendor, as they turn to the Balagtas epic for inspiration and use words as weapons. In the process, they gain insights into life which one may not necessarily find in the classroom.

“Florante at Laura Remastered” goes on stage Aug. 8 to Sept. 20 at the Peta-Phinma Theater in New Manila, Quezon City (behind the QC Sports Club in E. Rodriguez Avenue.)

Chekhov’s “The Cherry Orchard” will be adapted to the Philippine setting, specifically in a Visayan province, where the failure of a one-crop economy during the 1960s severely affects the lives of wealthy landowners. The adaptation is by Rody Vera, with direction by Loy Arcenas.

Before the formal opening of the season, there will be a rerun of the successful musical “Rak of Aegis” written by Liza Magtoto, with musical direction by Myke Salomon. This play successfully integrated the songs of the Aegis band into the story of a beleaguered flooded community.

“Rak of Aegis” will be staged from June 20 to Aug. 31, again to be directed by Legarda.

What is really new in Peta’s 47th season is the staging of experimental, exciting works from Japan, the United Kingdom and Finland. This represents Peta’s bid to go global.

“From local to global,” as Legarda put it. “Not just us but also, in a way, the understanding of a connection to a global world, a sense of global art.”

Presented by Peta and the Japan Foundation are “Strong Boy, Deaf Boy, and a Girl in an Abaya” and “Ayanasu (Woven).”

“Strong Boy …,” written by Nicolas Pichay with direction and choreography by Dudz Teraña, is a nonverbal production in which children survivors of Supertyphoon “Yolanda” narrate their stories in pantomime.

“Ayanasu (Woven),” directed by Kenjuro Otani, is another nonverbal play which depicts a family’s journey from despair to hope.

The British Council of Manila presents “The Price of Everything” by Daniel Bye, as written and performed by Bye himself, with direction by Dick Bonham, and James Cousins’ “There We Have Been,” with choreography by Cousins and music by Seymour Milton.

“The Price of Everything” deals with “bizarre facts and impassioned arguments” while “There We Have Been” is a presentation in dance interpreting troubled relationships, inspired by a novel by bestselling Japanese author by Haruki Murakami.

“The Price of Everything” will be staged at Studios A and B on July 10-11, while “There We have been” will be mounted on Oct. 9-10 at the Peta-Phinma Theater.

From Finland comes a hit magic theater show for children (and adults as well):  “Wally Watthead and his Lost Glow,” written by Janine Raudaskoski and Sami Rannila, and directed by the latter. It is all about a lightbulb who has lost his glow, and his SIM card/smartphone friend who searches for it (the glow).

“We want Peta to be a hub, not just of local works but of many activities,” says Legarda. “It’s very exciting. Theater is so active, not just Peta but other organizations, too. Dancing is also important. Every season is an opportunity, a challenge.”