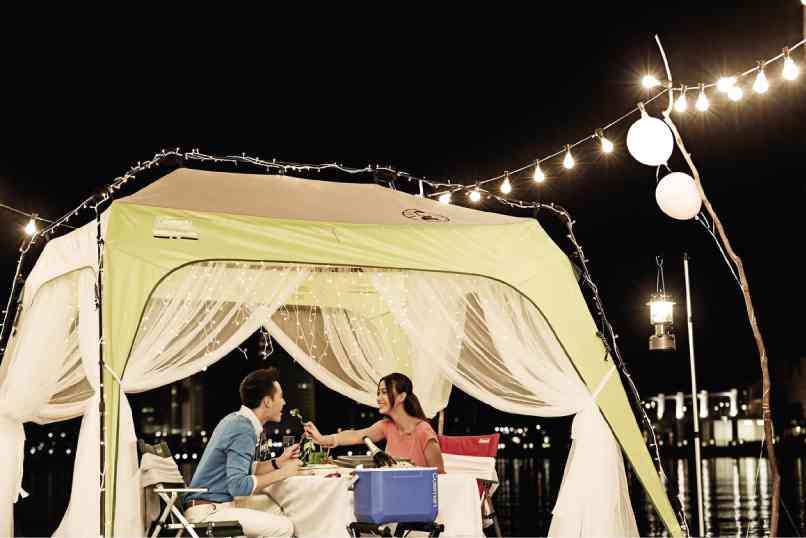 GLAMPING eliminates all the hassle of conventional camping so you can enjoy life’s special moments. JOVIC YEE

To ‘glamp’ is to enjoy the great outdoors without the fuss

While in Australia, Prince William and Kate Middleton reportedly spent the night glamping—camping the luxurious, or in their case, royal way.

The Duke and Duchess of Cambridge were said to have stayed in Longitude 131° in Central Australia which has a picturesque view of the Uluru-Kata Tjuta National Park, a Unesco world heritage site.

The reason for its astronomical price tag: It’s a five-star campsite with hotel-like features and amenities.

Glamping, a portmanteau of the words glamorous and camping, is the latest outdoor trend steadily gaining popularity worldwide and attracting a market bent on enjoying the great outdoors without the fuss.

One known local glamping destination is Sumilon Island in the Visayas. Though still a bit pricey, it’s relatively cheaper than its Australian counterpart.

So, is glamping just for the select few? Not necessarily. Anyone with the needed equipment can go glamping with family and friends.

Recently, outdoor brand Coleman launched in Manila a range of products so prospective glampers can enjoy a luxurious campout sans the stress of setting up a campsite and burning a hole in the pocket.

The launch was the first in Southeast Asia as the country is Coleman’s biggest and most active market in the region.

Lau observed that for the past four years, a good number of Southeast Asians are immersing themselves in outdoor activities.

However, she observed that the current camping scene in the region is more inclined toward the rough set— with campers living on “refugee” food, dealing with the lack of sanitary facilities and staying in poorly maintained campsites with small tents that deprive them of sound sleep.

“It’s an opportunity for us to introduce the Western-style of camping—relaxed and comfortable,” she said. “Our region can now afford these little luxuries. It’s time to do things differently.”

Apart from improving the condition of camping in the region, Lau added that glamping is targeted toward distinct markets—families, fashionistas and even seasoned campers.

Families can enjoy more time bonding than setting up their equipment with the Five-Minute Campsite composed of an easy-to-assemble tent, shade, lounger cot, table picnic set and grill.

Fashionistas who want to enjoy the outdoors but don’t want to stay overnight can indulge in  the Chill Out set.

Lightweight and easy to set up, the Chill Out is composed of a shade, mini table picnic set, low lounging laidback chair, hammock and portable barbecue bucket.

Seasoned campers meanwhile, can up their game with the Absolute Getaway set that has the same features as the Five-Minute Campsite but with bigger tents.

Add to that the Party Shade which can be turned into a sleep-in spacious cabin tent. Topping it off is the Instant Up Shower Tent—with portable shower and toilet.

“As our society improves, our quality of life deteriorates because of urbanization. That’s why we see the need for people to go outdoors and have real human interaction,” Lau said.

As of now, Coleman assistant brand manager Quenie Ganancial said that there are limited areas for glamping. (One possible area is Clearwater Resort and Country Club in Clark, Pampanga, where Coleman will be spearheading a glamping event on May 24 and 25.)

Not to worry, though, since as long as the chosen glamp area is accessible to vehicles, spacious and not high up in the mountains, you can camp the glamorous way.