Why Edgar San Diego had to start from scratch in designing costumes for ‘Priscilla, Queen of the Desert’ | Inquirer Lifestyle 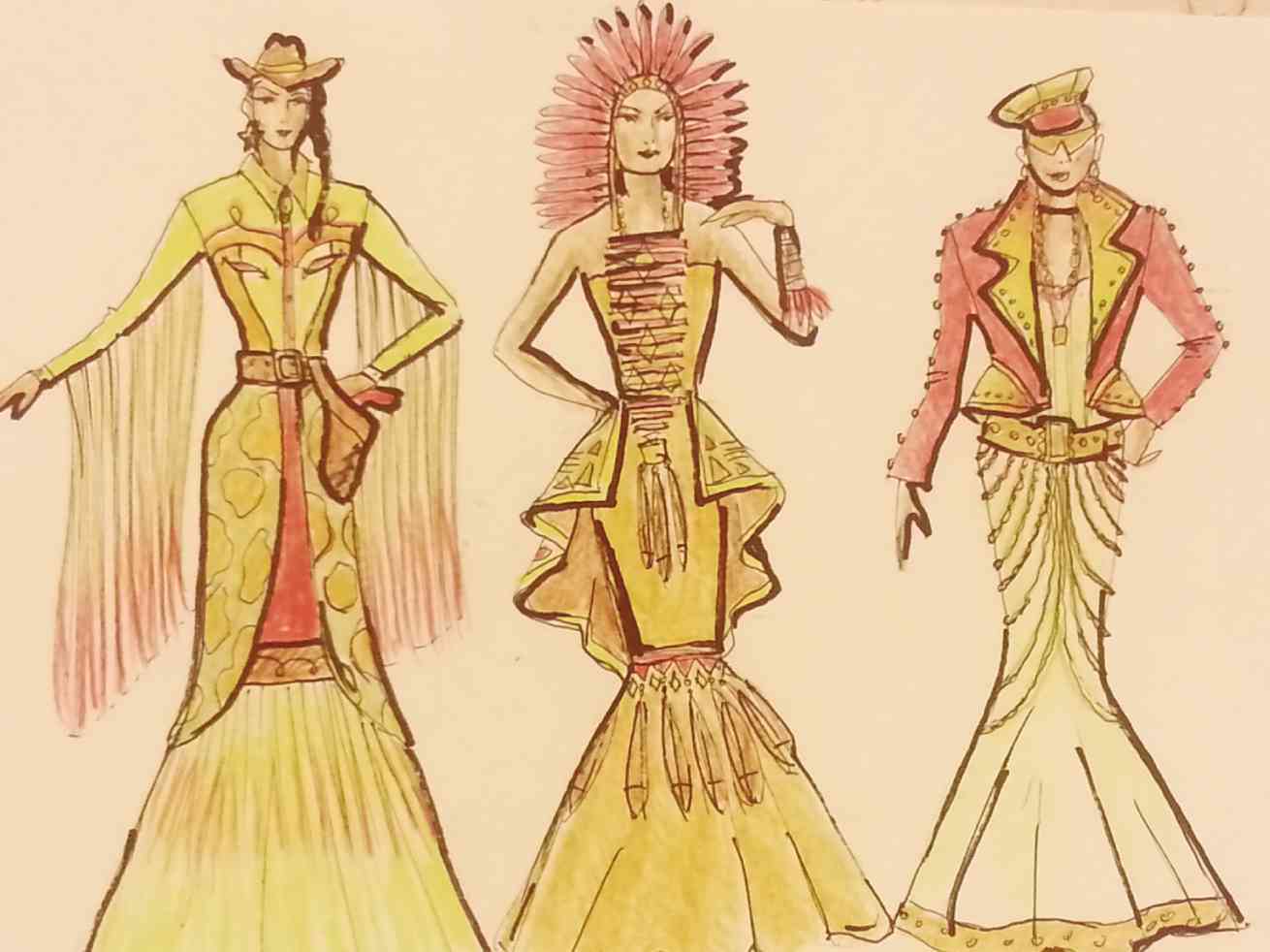 THE DIVA characters have outfits that are a tribute to the Village People. PHOTO BY POCHOLO CONCEPCION

Why Edgar San Diego had to start from scratch in designing costumes for ‘Priscilla, Queen of the Desert’

When the curtains rose at the opening of the Resorts World Manila (RWM) production of “Priscilla, Queen of the Desert” on Friday night at the Newport Theater, the audience was in for more than a musical treat.

The story of two drag queens (played by Leo Tavarro Valdez and Red Concepcion) and a transsexual (Jon Santos) who go on a cross-country bus trip for a cabaret gig in a desert resort town, the musical also features elaborate original costumes designed by Edgar San Diego.

As the Filipino producers discovered while poring over the contract details, the copyright to “Priscilla”—which premiered in 2006 in Sydney, Australia, and is booked until 2015 for a United Kingdom tour—prohibits the use of any of its costume designs in the foreign productions.

Thus, San Diego had to think of his own takes on the costumes. He says he collaborated with some members of the production team: “Sa concepts, nagbigay ng input sina (cast member) Michael Wiliams, (director) Jaime del Mundo … Pero ako nag-interpret.”

San Diego had previously designed costumes for Repertory Philippines productions including “Wizard of Oz” and “M. Butterfly,” as well as for Trumpets’ staging of “The Lion, the Witch, and the Wardrobe” and “Little Mermaid.”

It was Williams who rang him up for “Priscilla.”

San Diego says he saw the Broadway production in 2011, so he’s quite familiar with the story, and the costumes—for which he had to start from scratch.

He did more than 100 clothes for the Filipino cast, with help from two young students of Slim’s Fashion and Arts School in Makati.

He assigned a portion of the designs to the apprentices, who delivered their works with San Diego’s approval.

“They were very helpful,” he says, adding that he was also able to share with them his knowledge of costume embellishment and sourcing of materials. He took the students to Divisoria to buy the fabrics, and ordered some of the feathers from Bangkok, Thailand.

San Diego says that in the original play, the diva characters (portrayed in the Manila run by Bituin Escalante, Lani Ligot and Timmy Canlas) have only three costume changes.

The divas have outfits that are a tribute to the Village People, San Diego says, “pero gowns sila, in sunset colors.”

Other clothes designs are inspired by Diana Ross, Cher and Madonna—whom San Diego refers to as gay icons.

He says he enjoyed the work, though he wishes he had more time to finish everything.

“We first had a meeting in January to discuss the designs. I started doing the costumes early March. Revisions and alterations were done after the costume parade in the last week of April.”

So, how much did everything cost? “Magastos,” he says, but refuses to give a ballpark figure. “Binigyan nila ako ng ceiling. Pinagkasya namin.”

Surely it reached millions of pesos? He smiles, pauses, before giving a clue: “Hindi sila nagtipid.”

The RWM production of “Priscilla, Queen of the Desert” opened Friday night, with performances Thursdays to Sundays including matinees. Visit rwmanila.com or contact 9088833.

Of the more than 100 costumes that Edgar San Diego designed for the musical “Priscilla, Queen of the Desert,” the most difficult to execute was the gown with puppets.

Valdez himself confirms the difficulty of playing Tick, in an e-mail to Inquirer: “Wearing the costumes and humongous wigs and headdresses while dancing, while going on an extremely strict diet to look good, what a challenge!”

Asked how he dresses up offstage, Valdez says he considers himself “a ‘fashion independent,’ if there is such a term.”

When he was starting out as a pop singer, he says he was associated with the classic look, “so-called ‘tasteful’ way of dressing up, although there has always been a side of me that is quite offbeat and nonconformist.”

Having lived in London for years while doing “Miss Saigon” as The Engineer, Valdez says he realized he can also have fun.

“Off-work, I can be in casual shorts and tees, but always with a nice jacket to keep me warm in the freezing malls. On regular nights out, I’m usually in a relaxed getup. On big events, unless it is compulsory to wear a black tie, I go over-the-top, the whole shebang, in a way, to have fun, amuse myself and my friends. Except for the passion and focus I have for my work, just like life, I believe things shouldn’t be taken too seriously.”

Pressed to elaborate which fashion brands he favors, he says: “I believe that quality comes with a price, so Giorgio Armani, Hermes, and, at one time, the clothes of the late Alexander McQueen, come to mind. I also go for the clothes of the brilliant Chris Jasler of Jail Jeans. His suits have such excellent fit and little extra details.” Pocholo Concepcion