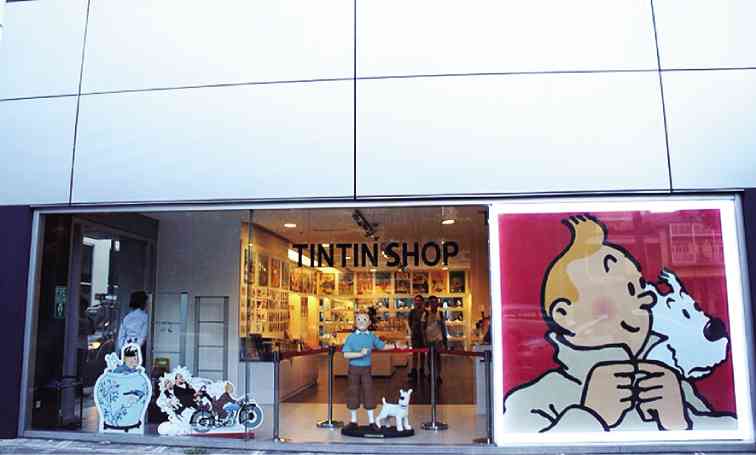 The adventurous and fearless Belgian reporter Tintin was the product of the imagination of Georges Prosper Remi or Hergé in 1929.

One of the slogans associated with Tintin was, “Le journal des jeunes de 7 à 77 ans,”—the journal of the youth from 7 to 77 years old—which signified the series’ timelessness.

Indeed, from Tintin’s first adventure in the Soviet Union in 1929 to today—85 years later—his exploits are still followed and enjoyed by readers of all ages.

Last week, Free Comic Book Day fans who dropped by Fully Booked were in for a treat when the bookstore opened the first Tintin Shop in Manila. It is the second Tintin Shop to open in Southeast Asia.

Though Fully Booked marketing director Jaime Daez had come across Tintin several years ago during buying trips, it was last January  that he decided to fast-track Tintin’s establishment here.

“I attended a toy fair in Nuremberg, Germany. It’s the biggest toy fair in the world. A good friend was the German representative for Tintin. I saw the selection they had, I liked it, but I did not find the pricing appealing to the Philippine market. But then he introduced me to someone who came from the mother company of Tintin, which is called Moulinsart,” he recalled.

“When he said he could give me better prices if I worked with him directly, I was very excited and interested.”

From Germany, Daez was invited by Moulinsart to Brussels to visit its headquarters. He and his wife Chris drove to Brussels to see the Tintin HQ and the creator Hergé’s original office.

“The principal for international sales was so charming, open and communicative that we immediately felt comfortable doing business with them.”

The series was groundbreaking, from its art to the storytelling.

“The Belgians are really the creator of the modern-day comics,” said Daez.

“They are the most passionate when it comes to comics; it’s kind of a cultural heritage for them. And Hergé is known as basically the god when it comes to comic book art—he pretty much started the medium and he owns the world record for the most expensive piece of comic book art ever sold, the cover he did for ‘Tintin in America,’ which, converted to US dollars when sold, amounted to about $1.8 million.”

Moulinsart has nurtured the heritage of Hergé and his characters. According to Daez, the current general manager of Moulinsart also happens to be Tchang Yifei, the daughter of Chinese artist Zhang Chongren.

Zhang is the man whom Hergé based the character Chang Chong-Chen on in “The Blue Lotus” and “Tintin in Tibet.”

It really was a no-brainer for Daez to give Tintin and the gang a permanent home at Fully Booked. By some  luck, the container carrying the Tintin merchandise he had ordered was supposed to arrive on April 26.

“Free Comic Book Day was on May 3, so there is no better time to open the shop than that because the comic book fans are the best people to advertise the store,” said Daez. “If we have to set up the store 24 hours nonstop for the next few days we gotta do it.”

The goods arrived on the 30th and Daez and a few of the staff came in (aptly) on Labor Day to start pricing and setting up the shop.

Their Labor Day efforts were rewarded because word spread like wildfire that the Tintin Shop had opened, and the reception from Filipino fans was overwhelming.

“The sales for the first week have been spectacular,” said Daez.

Some of the items Daez thought wouldn’t sell turned out to be the bestsellers. “We come from a book retail experience, so I was very conservative about the T-shirts and the Snowy dolls because, honestly, I don’t know how much we can sell. It turns out the Snowy dolls are the bestsellers, and the shirts are doing spectacular; we need to do replenishment orders already.”

Fully Booked is also planning to sell some of the Tintin merchandise in its bigger stores, like Alabang, but we suggest you visit the Tintin Shop in the  Bonifacio High Street bookstore to get the full Tintin experience.