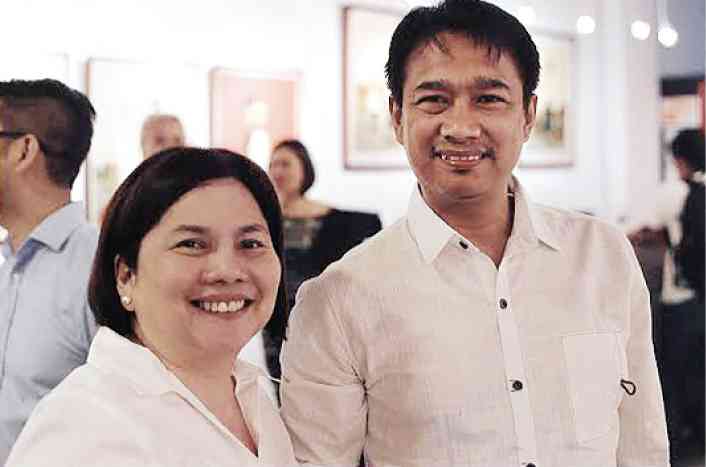 MARISSA Fernan and artist Dominic Rubio at the Qube Gallery

It was an elegant Saturday afternoon wedding for Philippe Andre Lhuillier and Carmen Anne Teves, at the Chapel of San Pedro Calungsod in the Cebu South Road Properties.

Carmen Anne is the daughter of Carol Ugarte Teves and the late Mateo Teves of Bais, Negros Oriental. Philippe Andre is the son of Philippine Ambassador to Portugal Philippe Lhuillier and Edna Diago Lhuillier, whose family also hails from Bais.

Mateo Luis Teves led his sister to the altar as did the bride’s grandmother Evelyn Graham Ugarte and her brother-in-law Ahmet Mert Bahce.

The church décor was a labor of love by Teresin Mendezona. She also did the reception and dinner that followed at the main ballroom of the Waterfront Cebu City Hotel. There were swaths of white all over the ceiling, garlands of fairy lights, and glistening crystal chandeliers.

The pre-dinner cocktails at the foyer were lots of fun. Edna and Philippe had brought the Spanish and Portuguese cheeses served. Former President Joseph Estrada was there, and so was Dr. Elenita Binay, plus a galaxy of relations mostly based in Cebu and Negros Oriental.

Alastair Granger, the hotel’s food and beverage director, was around seeing to every detail.

In this exhibit, they are larger-than-life people in costumes set against the backdrop of Cebu heritage sites such as the Basilica del Santo Niño, the parish churches of Argao and Dalaguete, old Magallanes street, and bucolic scenery, like a family riding on a carabao.

The artist was there to explain his works and endlessly pose for photos, as requested by the buyers. Present, too, were the exhibit’s managing director Jack Teotico, plus the gallery’s owners Jon Gotiong and Maris Holopainen. The exhibit runs until May 19.

The Cebu International School had a two-night run of the Broadway musical comedy “Annie” at the school’s Dragon Dome. In the title role was Patricia Rivera, with Ado Laplana doing a great portrayal of Daddy Warbucks.

In the cast were Gabi Baljak as Miss Hannigan, Marcel Pesch as her brother Rooster Hannigan, Ysabelle Alesna as his girlfriend Lily St. Regis and Maggie Alcala as President Roosevelt.

The play is based on a 1924 comic strip Little Orphan Annie, created by Harold Gray, a man with very conservative views. Through Annie, he expressed his thoughts on society, human nature and government.

The character of Annie gained popularity in the ’30s as a radio series. The musical comedy became a hit in the ’70s. It is set in the ’30s, with Annie quite miserable at the orphanage run by the tyrannical Miss Hannigan.

Annie’s situation is altered when asked to visit the home of wealthy industrialist Oliver Warbucks. She charms his household staff and Mr. Warbucks himself, who is perceived as coldhearted.

He proposes to find her parents, offering a reward if they can come and prove their identity. Miss Hannigan goes into action with her brother Rooster and his girl Lily to impersonate Annie’s parents.

This puts Annie in danger, but all’s well as the play has a happy ending. The hit song “Tomorrow” comes from “Annie.”

The Ikebana International Cebu chapter 145 scored a great triumph with its annual exhibit held at the Atrium of Northwing in SM City Cebu. For three days, it attracted large crowds of appreciative viewers.

Naomi Otake, the consul’s wife, was present, and next day gave an Ikebana demonstration of the Japanese art of flower arranging. It was open to the general public.