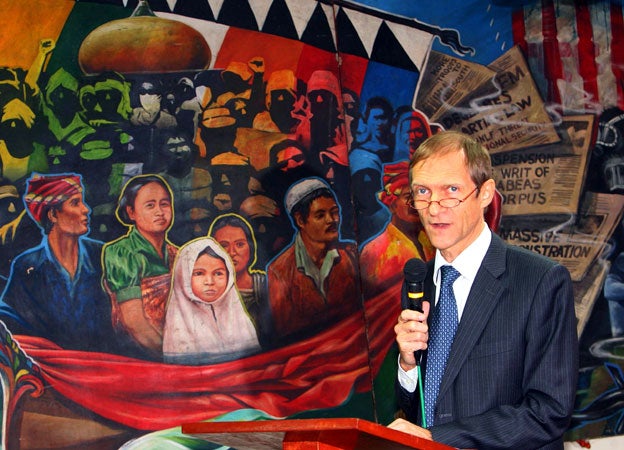 MANILA, Philippines—The Philippines may become the new destination of choice for more European tourists, with the return of direct air links between Manila and Europe and the Department of Tourism’s (DOT) “fantastic and amazing” global campaign that has reached the region, the European Union’s (EU) envoy to the Philippines has said.

EU Ambassador Guy Ledoux on Friday noted the potential for increased European tourist arrivals in the country, citing the Filipinos’ well-known warmth as hosts and other factors that should draw more travelers.

“I’m convinced there is going to be a significant increase in tourists in the coming years. Already last year we saw an increase of eight percent, representing 376,000 tourists… And we hope that this will increase significantly over the next years,” Ledoux told reporters Friday night on the sidelines of the celebration of EU Day.

“They (Europeans) certainly very much appreciate the warm welcome they receive in the Philippines, because Filipino people are very friendly and they look after you like family. So this is something that’s sort of a comparative advantage of the Philippines over other countries,” he said.

Tourists from the EU accounted for eight percent of the total 4.5 million visitors to the Philippines last year, making the EU the fifth largest source of tourists next to South Korea, the United States, Japan and China.

The EU delegation in Manila chose Philippine tourism as the theme of this year’s celebration of EU Day to mark the bloc’s decision to lift the air ban on Cebu Pacific last month and on Philippine Airlines (PAL) in July 2013.

Throughout the reception that gathered some 500 guests including businessmen, diplomats and government officials in Makati, videos played loop ads from the DOT’s famous “It’s More Fun in the Philippines” campaign. Ledoux said the ads had reached Europeans through television.

“We picked the topic of tourism as a theme for Europe Day today because of the lifting of the air ban for PAL and Cebu Pacific. The Philippine Airlines has restarted direct flights between Manila and London, and I think there’s a combination of positive factors that would lead to a significant increase of European tourists towards the Philippines,” he said.

He said progress in the Mindanao peace process, particularly the recent signing of the Comprehensive Agreement on the Bangsamoro, and its positive impact on security in southern Philippines would also play a factor in drawing more tourists.

But Ledoux hoped the Philippines would address “bottlenecks” that could impact tourist arrivals, particularly the crowded airports.

More Europeans to have more fun in Philippines