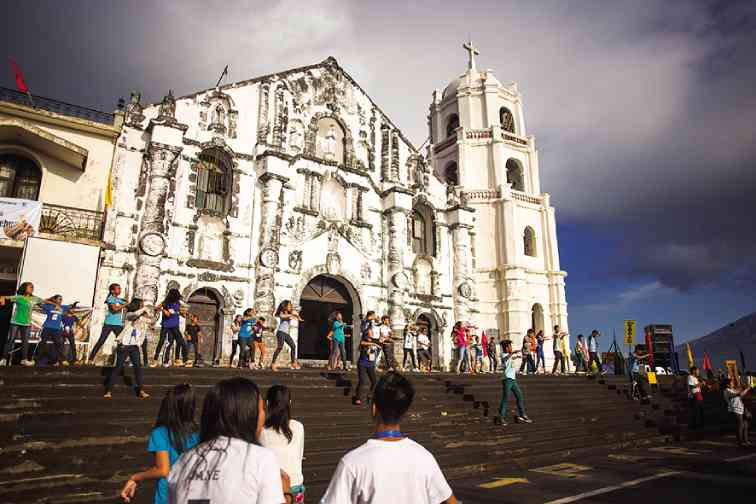 Bicol heritage is the focus of this year’s National Heritage Month celebration spearheaded by the National Commission for Culture and the Arts (NCCA).

Specifically the focus will be on “Almasor,” or the Albay, Masbate, and Sorsogon provinces.

Themed “Pamanang Pinoy: Taoid 2014,” the celebration opened with the Walk for Heritage from the Cagsawa Church ruins to Daraga Church by NCCA delegates, the people of Daraga and the youth from Angat Kabataan, the annual youth camp for heritage conservation.

According to NCCA Commissioner Fr. Harold Rentoria, OSA, head of the Subcommission on Cultural Heritage (SCH), the walk is symbolic of the transfer of the parishioners of Cagsawa to Daraga after their church was destroyed by the 1814 eruption of Mount Mayon.

Later a cooking demonstration of Albay’s delicacies such as suman sa ibos and balisongsong was held in the Daraga Church.

The opening program of Taoid, the Ilocano word for heritage, was held in the evening in front of the Daraga church. It was attended by NCCA Chai Felipe de Leon and Albay Gov. Joey Salceda.

Father Rentoria said the Bicol heritage tour seeks to look for heritage sites that are significant enough to be recommended for declaration either as historical landmarks, important cultural properties or national cultural treasures.

He noted that only two sites have been declared national cultural treasures.

The first is Daraga Church, the oldest existing structure in the province of Albay having been built in 1772, and unique for its Filipino baroque architecture laden with details on its facade and belfry.

Second is the Church of Tabaco, notable since the walls still bear the identification marks of its masons, a rarity among Philippine churches, according to the NCCA website.

Father Rentoria said that the NCCA is now looking for other structures in Albay for similar declarations, like the Camalig Church and the old houses of that town.

The NCCA is looking at the Barcelona Church in Sorsogon for possible declaration as a heritage site, Fr. Rentoria said.

The same prospects for Masbate are being checked, he added.

The heritage structures the SCH is checking in Almasor “will represent the locality that the people can be proud of,” explained Fr. Rentoria. “They (the people) can identify themselves (with the structure) and it could also be a source of their unity.”

Father Rentoria is also behind Angat Kabataan, the annual youth camp that seeks to raise awareness on cultural heritage among the youth.

“Here in Almasor, we would like to focus on the youth because they are vital to the protection of the local heritage,” the Augustinian friar said. “In order for us to preserve the local heritage, we have to pass on the heritage to them since they will be the future of the community.”

The heritage youth summer camp orients young Filpinos on heritage conservation, the laws that promote its protection, and what they can do.

This message, according to him “is not only for the people of Albay but for the whole country as well,” adding that Filipinos should not wait for natural calamities to happen before acting on its protection and conservation.

Salceda said they are funding the restoration and conservation of the province’s heritage sites such as the Sinimbahanan ruins in Tiwi, Colegio de San Buenaventura in Guinobatan, Malinao convent, Bacacay Church, and 11 colonial houses in Camalig.

In his speech at the Taoid opening ceremonies in Daraga, the governor said he takes pride in Albay’s 18 colonial churches; of these, 13 have had “no interventions” or assistance for conservation in the past several years. These churches are candidates for national historical and cultural sites, he added.

Aside from the preservation of the province’s ecology and historical heritage, arts and cultural development is also one of their programs and tourism is anchored upon culture.

The governor also explained that culture should be alive and evolving; it should be practiced so that it can help improve collective memory.

Because of the province’s culture-based tourism, Salceda said “culture in a sense becomes a way of becoming the source of our resiliency.”

De Leon said one of the commission’s activities this Heritage Month is conducting cultural mapping project which lists all cultural assets of a place which will be used for its development.

Criteria for cultural mapping include the originality of the site, its indigenousness, authenticity, uniqueness, historicity, magnitude, and excellence.

He lamented that tourism promotion might have commercialized culture.

“Commercialism is the bane of tourism and the bane of development. Sapagkat nawawalan ng karakter ang lugar (since the character of a place diminishes),” he said.

He added that although development cannot be stopped, it should be anchored on culture.

He also said the creativity of the people should be promoted.

“Art for all is one of the best ways to progress because (the peple) become more creative,” De Leon explained.