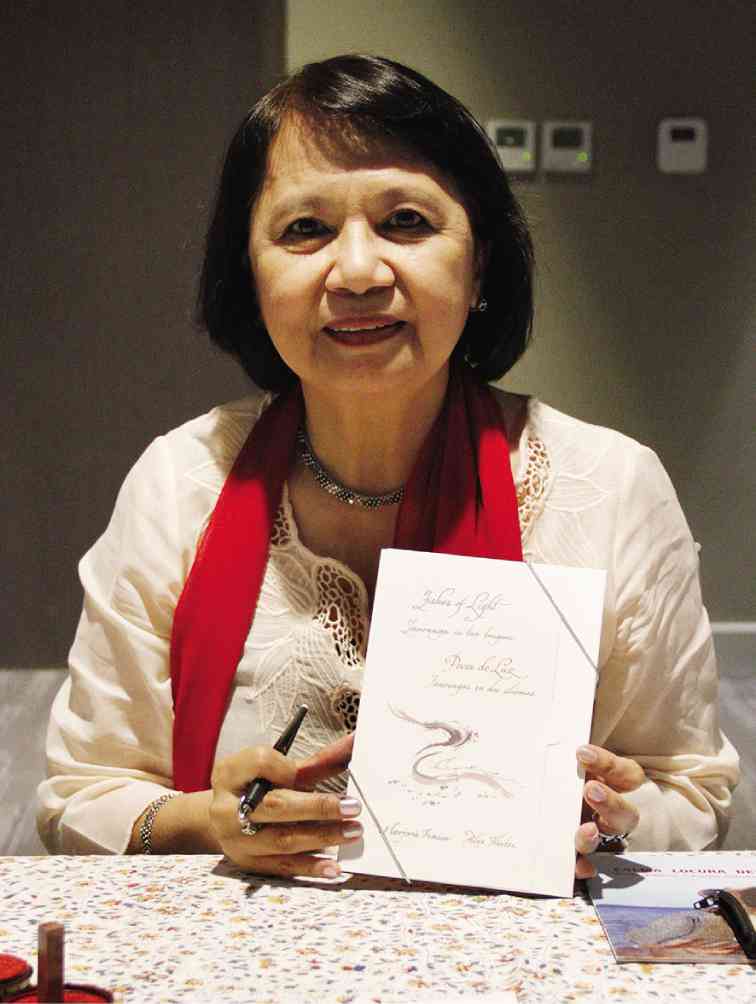 MARJORIE Evasco with her latest work, the book of tanrenga in English and Spanish, “Fishes of Light/ Peces de luz,” co-written by Cuban poet Alex Fleites.

Poet Marjorie Evasco: ‘Silence is the syntax of listening’

Aspiring literary writers are advised to read and write to cultivate craft. But for those striving to become poets, there’s additional advice: Be silent and listen.

Evasco, who received the 2010 Southeast Asian Write award given by the Kingdom of Thailand, delivered the lecture, “Memoir of a Writing Life: Learning the Lesson of Meaningful Silence.”

Tracing her 38-year-old journey in crafting poetry, Evasco said she “explores the nuances of the ’meaningful silence’ of poetry and the poetics of attention to the 10,001 things of marvel in the world.”

She said she got the idea of her lecture when Del Mundo had pointed out to her that “meaningful silence” sounded like the Tagalog term for quiet thinking, pagmumuni-muni, which also means to contemplate.

“[Del Mundo] had researched on the root of the term muni, which is from Sanskrit, and is found in the honorific name of the Buddha, Sakyamuni, ‘The Sage’ of his people, also known in history as Siddhartha Gautama,” Evasco said. “Indeed, the practice of writing is a process of pagmumuni-muni, a way of cultivating awareness in silence.”

Poetry attends to the listening mind, and for Evasco, this requires deep  meditation.

“Leaning into silence and moving toward words are moments in a rhythmic continuum,” she said, “like the cadence of the heart, the opening and closing of petals of the red-orange hibiscus, or the stillness and flight of a blue moth.”

Evasco tried to seek answers to the many questions that surround the art of writing and reading poetry: How does a poem pay attention? How does a life of poetry sustain the solitude of listening? How does sustained listening inspire the imaginative life?

“In the practice of writing poems, there are no fast and easy answers to these questions,” she said. “There is only the constant practice to hone the skill, the way one learns how to discipline the restless mind ceaselessly jumping like a monkey from one thing to another, and become quiet and focused in meditation.”

Evasco said one of the aesthetic principles that National Artist for Literature Edith Tiempo taught her was the “intrinsic restraint and evocative approach of poetry’s language, its appetite for suggestive images rather than for mere generic descriptions or flabby statements.”

“The process of composing a poem is largely an unconscious play with words which, if one is lucky, gives room for the poem’s mind to find itself and discover new worlds,” she said. “After the poem’s crafting is done, the writer becomes just another reader of the completed work.”

On the other hand, she learned from the late Edilberto Tiempo, Edith’s spouse, that the task of the reader is to “dream the poet’s dream,” a phrase he derived from the critic Benedetto Croce,

“I finally understood how keen attention enables a reader to ’dream the poem’s dream,’ imagining what the poem does not need to say, since the poem has become a ’gesture of language,’” she said.

The “power of reading literature,” she added, “opens up an interest in the promptings of the human mind and heart, particularly our capacity to choose between kindness and cruelty.”

Evasco said she was barely 23 but already with kids to raise in in 1977 when she attended the Tiempos’ famous National Writers’ Workshop at Silliman University in Dumaguete City, Negros Oriental.

The experience was no cake walk for her as she hardly escaped the harsh criticism of the panelists of her works.

But one poem survived the critical beatings and received praise from Edith Tiempo, who wrote in Evasco’s manuscript: “One swallow does not a summer make.” It was an encouragement for her to continue writing.

“I wanted to learn how to write poems because I was hooked to the beauty I found in poetry, and because the making of poems was a difficult craft to master,” she said, alluding to Rilke who said to “trust in the difficult” because it was the only teacher.

In 1986, her first poetry collection, “Dreamweavers: Selected Poems 1976-1986,” was published by Aria Editions, Inc. and won the National Book Award (NBA) from the Manila Critics Circle.

It was followed by “Ochre Tones: Poetry in English and Cebuano” (Salimbayan Books, 1999), which also won the NBA.

Her book of selected poems, “Skin of Water,” was published in 2009; it contained Spanish translations.

“When one pursues this journey called a writing life, more often than not, one takes bearings on an active and exciting reading life,” Evasco said. “Literature students with interview class projects inevitably ask writers how one could become a writer. And my answer is always: ’Read, read, and read some more.’”

To end her lecture, Evasco read her poem, “In Baclayon, Reading Levertov’s ‘For Those Whom the Gods Love Less,’” which she wrote before the Oct. 15, 2013 earthquake that struck her hometown Bohol.

The quake severely damaged Baclayon Church, one of the country’s oldest churches.

“In this humid May afternoon in Baclayon, / the guava redolent on the branch meets the sun- / bird’s praise, both scent & song passing through me, // as though I have turned into all-embracing air / in this keep of grace, Levertov’s radiant wings / decanting shadows, urging the only way to let love.”

The poem seemed an elegy and a resurrection.

“When the poem is read,” Marjorie Evasco said, “sometimes when one is quiet enough, it awakens the world that once was, and something rises from the ruins like a phoenix in the imagination, vibrant and complete.”