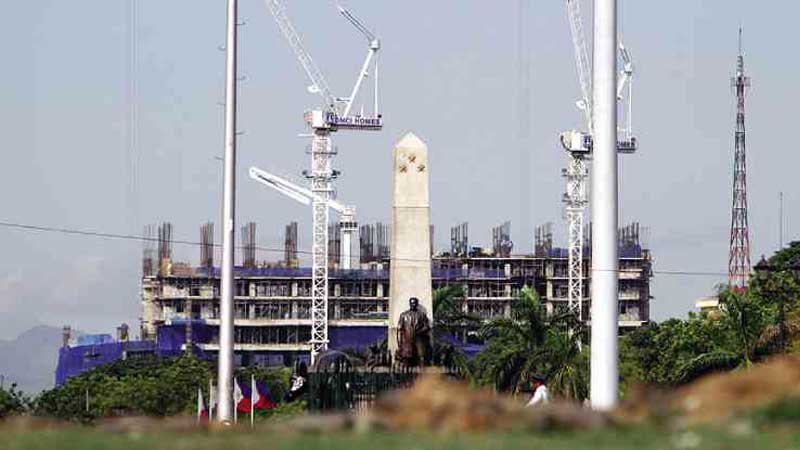 CRITICS note that the construction of Torre de Manila is marring the skyline behind the Rizal Monument. EDWIN BACASMAS

This despite several conditions that the private company has been compelled to agree to, just so the new administration of Manila Mayor Joseph “Erap” Estrada would not suspend the building permit given DMCI by Estrada’s predecessor, Alfredo Lim.

Celdran, Estrada’s consultant on tourism issues, maintains he finds the construction just behind the former site of the Jai Alai building a “desecration of the city’s sight line.”

City officials may have been satisfied after DMCI kowtowed to their demands, including a supposed revision to a “more art deco” design of Torre de Manila’s planned façade, but Celdran thinks otherwise.

“My support does not come for free,” Celdran huffed over the phone when interviewed by Inquirer Lifestyle.

DMCI curtly dismissed Celdran’s rant and insisted that the concerns raised about Torre de Manila were addressed during a dialogue with City Hall officials.

“We will not issue any statement. For us, this is a closed issue as the project is full-compliant,” the company said through a representative who requested anonymity.

DMCI’s problems began in 2012 when netizens stormed the Internet and criticized the planned Torre de Manila, insisting it would allegedly mar the skyline behind the famed monument of national hero Jose Rizal in Luneta Park.

Instead of a sprawling, open space bordered by the blue sky, green grass and historic buildings, Rizal’s background would suddenly have a modern building jutting out from behind the LRT 1 tracks along Taft Avenue, netizens said.

Worse, the building’s façade would be incongruous vis-a-vis the park’s relaxing vibe. And what if the building’s owners decided to drape ad billboards like they do along Edsa?

Bagatsing’s resolution argued that the resulting building would spoil the city’s sight line; he rallied his colleagues in the city council to consider his draft “from a heritage and historical perspective.”

The councilor successfully worked for the resolution’s approval. But Bagatsing was told this had no legal basis since the building’s construction was not considered illegal.

A zoning board that takes care of height limits was created only when Estrada became mayor, he pointed out.

“So I drafted an ordinance regulating any vertical development in the vicinities of all historical landmarks, national parks and city parts of historical value all over the city. Meaning, if you’re gonna build near an open space that has historical or cultural value, it has to be regulated and would need the imprimatur of the city council,” he said.

Bagatsing added it was the first and only ordinance he authored that he managed to pass.

Lim, however, vetoed the ordinance when the council was on recess and smack in the middle of the campaign period of the 2013 local elections.

Bagatsing said Lim wrote the phrase “ultra vires” in explaining his veto, implying that the authority set in the ordinance was beyond the powers of the city council.

Bagatsing and his supporters’ hands were tied. They could not convene the session and had no means of overriding the veto.

“The reason was ‘ultra vires,’ meaning it’s not legal,” he said. “How can regulating future vertical development be illegal? It’s for the protection of heritage. Washington DC and Paris have that. Is Manila not a unique city in terms of history and heritage for being the first (cultural and commercial) center of the country?”

“We had to go back to square one,” the councilor lamented.

Celdran said it did not help that the National Historical Commission of the Philippines (NHCP) seemed to have sided with Lim in supporting Torre de Manila’s construction. “The NHCP was not on our side,” he recalled.

Celdran said NHCP chair Serena Diokno issued a letter “that clearly shows she is with DMCI and as we know, DMCI would have more lawyers than we do.”

Instead of reprising the pro-heritage argument, Bagatsing appealed to DMCI’s sense of nationalism. The resolution was unanimously approved last November.

He said the ordinance vetoed by Lim would soon face the council wringer anew. It had already been submitted to the secretariat that has to set a date for its discussion in plenary.

The councilor described as “small victories” the agreements reached that time which include several requirements DMCI must meet, such as:

The planting of “huge and tall” trees in two areas: right behind the Rizal monument; and along Taft Avenue right in front of the new building “to enhance the view”

The construction of a waste disposal system or water treatment plant since the building is expected to generate waste material that could no longer be accommodated by the city’s antiquated sewerage system.

The employment of Manila residents, specifically those in the vicinity of the building, from the time of construction until Torre de Manila becomes ready for occupancy

DMCI’s website said the resort-inspired Torre de Manila would have 41 floors. Bagatsing however, said he heard it would have 49. Celdran insists there would be 51.

Bagatsing said current zoning rules limit the height of buildings in the area to only 20 floors.

“But the zoning board is there to grant exemptions. DMCI has been granted exemptions because it agreed to certain conditions,” he said.

Bagatsing now said he would rather show magnanimity, explaining that following the dialogue attended by both DMCI and City Hall representatives, “a delicate balance of development and heritage” has been reached.

Besides, the councilor rationalized that the city stands to earn revenues from the building’s operations.

“Especially now that the city is bankrupt and in dire financial straits. This development will add income to the city. But they have to change the façade and put the trees and deal with the waste disposal,” he said.

Bagatsing said he is aware of Celdran’s sentiments.

Celdran confirmed reports reaching Bagatsing that he’s smarting from the fact that DMCI did not consult with him.

This, he said, was one of the agreements reached when DMCI representatives finally decided to join a dialogue after the city council passed its resolution last November.

The activist added that despite the agreements forged between DMCI and City Hall, the fact remains that there are concerns that have to be addressed.

For example, the building is not actually located along Taft Avenue as its website claims, Celdran noted.

“There is a one-lane road that leads to the site. It is not on Taft Avenue,” he pointed out.

Celdran warned of possible traffic congestion, given the narrow access road leading to the building.

He also feared the floods that could be caused by a badly constructed structure and unmanaged trash from the onslaught of residents.

The activist also pointed to a recent report that a student of Adamson University, a stone’s throw from the site, was nearly killed as a result of the construction.

Celdran vowed to keep complaining on social media, if only to call attention to the continued threat to city’s sight line.

“The best I could do is to make known the desecration. I will keep complaining on Facebook,” he said.