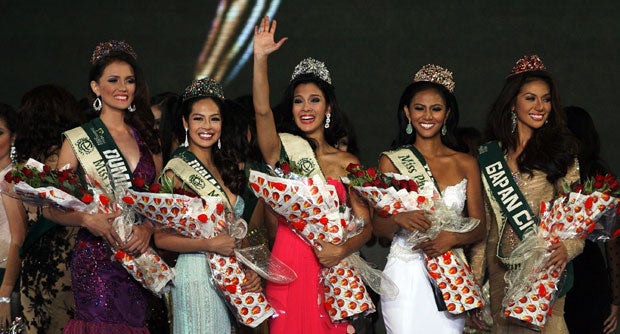 Cebu City’s Jamie Herrell bested 48 other aspirants, earning the right to represent the Philippines in the global Miss Earth pageant later this year.

During the final round of the competition, judge Risa Hontiveros asked the 19-year-old student if human beings had been good children to “Mother Earth.”

Herrell added that if people could only take action to save the planet, then Mother Earth would return the favor.

She got a big round of applause.

She placed second in the makeup and hair challenge, catwalk challenge and dance category, and ranked third in the “Trash to Class” and beachwear styling challenges.

A tearful Herrell received her crown from last year’s winner, Angelee Claudett de los Reyes, who finished in the Top 8 of the 2013 Miss Earth pageant.

“All of this is a surprise for me,” Herrell told the media. “I never really considered all of my previous awards as an assurance that I would win. I know the finals night is a different competition.”

The reigning “Sinulog Queen” is a scholar at the International Academy of Film and Television who took time off from the Cebu-based film school to join the competition. A Santo Niño devotee, she revealed she brought an image of the Holy Child backstage to keep her motivated.