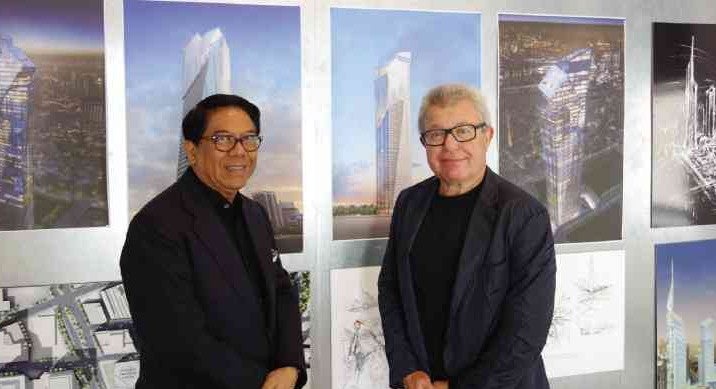 Touted by the New York Times as a “starchitect,” Daniel Libeskind is the master plan architect for the reconstruction of the World Trade Center in Lower Manhattan. He is coming to the Philippines for the promotion of the mixed-use tower, Century Spire.

Libeskind himself and Armani/Casa director Fabrice Gouffran are the special guests at the opening of the Century Spire showroom at Pacific Star Building on May 28.

Targeted to open in 2018,  Century Spire will be the eighth tower to rise on Century City, an exclusive master-planned enclave of prime residential, office, retail and medical developments on Kalayaan Avenue, Makati City.

Libeskind’s works are described as “sculptural,” even “jolting.” He says the design of the Century Spire is unprecedented. While most towers get smaller at the top, Century Spire’s upper region branches out like a tree. “It crystallizes into a number of really spectacular spaces. And that has never been done,” he points out.

The pinnacle of the tower is shaped like a “crest.” Three bold volumes of space emerge from the crown and offer commanding views from a different perspective.

The crown is there not just for bold aesthetics. These intersecting spaces will be used for office, amenities, events, garden and the new headquarters of Century Properties.

The boldness of the design reflects the optimism about the Philippine economy and its robust real estate industry. “You take every project to reflect a uniqueness of the place. It has be uniquely tailored to the functional demands, the spatial and environmental demands, but at the end, it has to be an original work,” says Libeskind. “I think it will bring a whole new perspective to the importance of urbanism and architecture… sending a message to the world about the Philippines.”

Libeskind is also famous for designing the Jewish Museum in Berlin and the Imperial War Museum North in Manchester.

He explains his unconventional work: “In an age of globalization, when architecture gets homogenized and flattened by the same computer-generated software, I resist this direction. I never believed in Mies van der Rohe’s dictum, which was to design one building and endlessly refine it. That’s a great formula for financial security but for me, it’s unadventurous.”

However, Libeskind always keeps function in mind. “Many architects would think that the object of their career is to build a museum,” he explains. “But architecture has to engage in a whole spectrum of needs, such as housing, shopping, education and office buildings… I try to blur the lines… to see what is common between them as the art of architecture.”

“Clients who come to me have an ambition beyond the average. They are willing to take a risk. They are not coming to me for another consumer item. My relationships with clients is not adversarial. It’s quite the opposite. I enjoy working with clients. I like to ask the client: What do you want? What kind of world do you want to create?

“And I enjoy the interaction. I actually think it enriches the possibilities to draw the client into his own visions and dreams. We share an aspiration and mutual desire to create something lasting, something successful, something beautiful.”

Chaired by Jose E.B. Antonio, it has produced landmark projects in the Philippines through its partnership with world-class designers and developers such as I.M. Pei for Essensa East Forbes, the Milano Residences (interior design by Versace Home) and Trump Tower at Century City.

Libeskind’s building will be complemented by the sophisticated interior design of Armani/Casa.

In a statement, designer Giorgio Armani, president and chief executive officer of the Armani Group, says: “If the architect’s aim is to create remarkable spaces, it is my aim to bring these to life through my interior-design aesthetic. I am very pleased to be partnering Armani/Casa with Century Properties. I believe that the combination of Daniel Libeskind’s vision and my own will result in a truly remarkable place to live—full of elegance and wonder.”