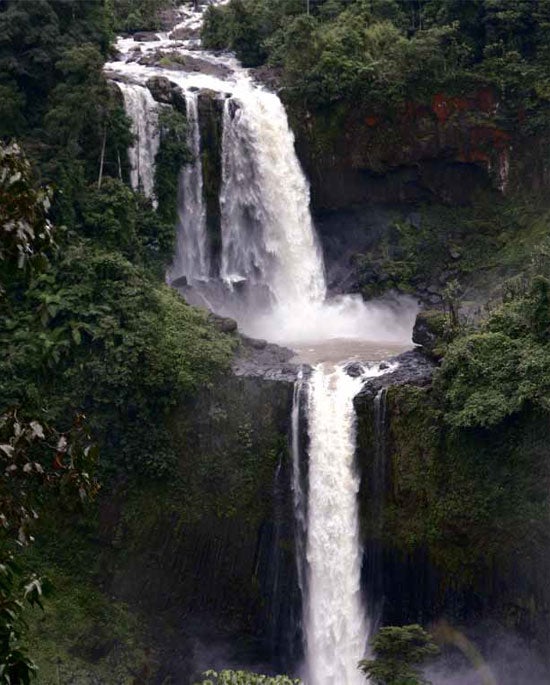 AWESOME POTENTIAL Hidden from view in the remote hinterlands of Lanao del Norte, the 265-meter Limunsudan Falls can be reached from Iligan City proper by a two-day trek across jungles or by driving five hours to Cagayan de Oro City up to Talakag town in Bukidnon province and back toward Iligan City. ROGER MARCELO/CONTRIBUTOR

ILIGAN CITY, Philippines—In a city with 23 waterfalls on its list—some say it’s actually 30—it would not come as a surprise if yet another is added to the number.

Iligan, also called the City of Majestic Waterfalls, has one other that many say could rival its premier attraction, the legendary Maria Cristina Falls that supplies 70 percent of Mindanao’s electricity.

The little-known 265-meter, two-tiered Limunsudan Falls is tucked in a vast mountainous and forested area that not many Iliganons know of, much less considered as a travel destination because of its remoteness. It is located at Barangay (village) Rogongon, roughly 55 kilometers from downtown Iligan.

It would probably be safe to say that generally speaking, only members of the Higaunon tribe, who call the 35,555-hectare Barangay Rogongon home, may have seen or are familiar with Limunsudan Falls.

Reaching the falls requires either a two-day trek across jungles or a five-hour circuitous drive that takes one to Cagayan de Oro City in Misamis Oriental province, then to Talakag in Bukidnon province, and then back to Iligan in Lanao del Norte.

Limunsudan is said to be the second-tallest waterfall in the country. The record for the tallest has been given to Aliwagwag Falls in Cateel, Davao Oriental province. However, Aliwagwag Falls is, in reality, just a long series of 84 “steps” whose cumulative height reaches 338 meters.

Limunsudan, on the other hand, has two, and not to mention, huge free-flowing vertical drops. In fact, each of Limunsudan’s tiers is taller than the mighty 98-meter Maria Cristina Falls.

The comparison with the wondrous Maria Cristina Falls cannot be avoided: Its beauty and power are two attributes that may very well describe Limunsudan.

Truth to tell, after a “waterfaller” (those who love viewing waterfalls) manages to get over the initial shock at the beauty and grandeur of Limunsudan Falls, he is likely to ponder on its awesome potential in terms of generating power.

The might of the Maria Cristina Falls, which has been harnessed by engineers through the Agus VI Hydroelectric Plant in Iligan City, has been estimated to have a capacity of around 200 megawatts. But if an engineer were to stand before Limunsudan Falls, it would be fairly easy for him to see how easily it could rack up that same figure, and even much more.

Many Iliganons today already feel it is ridiculous for them to be paying so much for electricity with Maria Cristina Falls right in their midst.

This is even more relevant now when the threat of a power crisis looms in Mindanao and it would be difficult to ignore all that untapped natural and clean source of energy just sitting there untouched.

However, Limunsudan’s days as a hidden natural wonder appear to be numbered.

According to Wilma Sihag Soong Wade-Bado of the National Commission on Indigenous Peoples Provincial Office here, a hydropower company has already conducted a feasibility study on its potential.

Wade-Bado, a descendant of a Higaunon princess from Rogongon, said the company is in the process of securing a Free Prior Informed Consent from the Higaunons. Getting this certificate is required by law since it involves the lumad Higaunon’s ancestral domain.

The lack of good roads to Limunsudan Falls serves as the major drawback to waterfallers and those seeking to harness its power. Complicating matters would be the very real threat of armed men who are sighted crossing the jungles from time to time.

In fact, when the author, together with several others, visited the waterfalls several years ago via the Talakag route, one such group we encountered on a lonely dirt road tried to shoot us.

Trips to Limunsudan Falls still remain a security concern up to this day, and visitors are advised not to go to the area without military or police

But for waterfallers who ignore the lack of a road network and threats to life and limb, the experience of seeing Limunsudan can be a thrill of a lifetime.