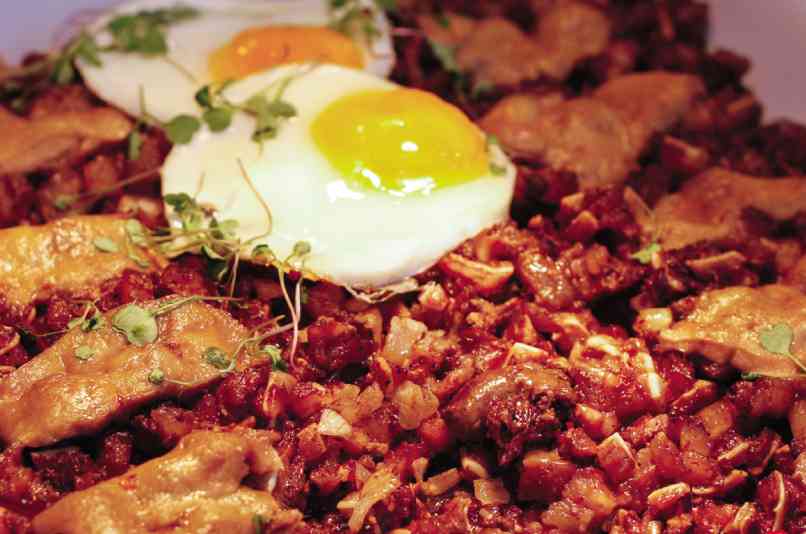 What is the one dish that best represents Philippine cuisine?

Whatever it is, these celebrity chefs know their roots and recognize how rich and wonderful Pinoy food is. Any chance they get, they

promote local fare, recreate the goodness of the dishes they are most familiar with and even reinvent local favorites to make them more appealing and palatable to a wider market including the younger generation.

“Lechon because it’s a festive family dish,” justifies Anglo, who is the featured celebrity chef with Del Rosario and Lim in Diamond Hotel’s ongoing Filipino food festival, “The Best of Filipino Cuisine.”

“We serve lechon whenever there’s something to celebrate about,” Anglo explains. “It means togetherness. It’s so us. It represents our personalities and attitude toward life. We love fiesta. We are always smiling and happy.”

What makes Anglo’s lechon different from other lechon is that he puts a lot of batuan (hard green fruit used to sour dishes), lemongrass and loads of garlic in the pork belly and roasted to perfection. The result: nice smoky flavor with juicy, tender meat that is delicious enough to eat on its own without sauce. The golden-brown skin easily crumbles to the bite with a thin layer of fat attached to the skin.

For Del Rosario, who hails from Pampanga, sisig should put the Philippines in the world culinary map.

“Where can you find sisig in the world?” asks Del Rosario. “Only in Angeles City (Pampanga).”

Sisig has been made famous by the late Aling Lucing from Pampanga.

“It’s very Filipino, thanks to Aling Lucing. No matter how unappetizing part of the pork you get the meat from—snout and ear—it comes out very tasty. I think sisig well represents the Philippines. Even if we are living in a third-world country, our food is exceptionally good and worth promoting.”

For the food fest, Del Rosario offers his signature sisig dish with a twist—adding foie gras and organic egg topping. The result: extra rich and flavorful dish with crunchy textures.

Del Rosario has likewise added a gourmet-ish spin to classic Lapu-Lapu Mayonesa, a recipe of his mom. He combines caviar, capers and sour cream to the mayonnaise.

“That’s the way we do it,” says Del Rosario. “I think the younger generation couldn’t relate with stuff like humba. They would rather go for Italian food. So, one way of getting their attention is to add ingredients that they are more familiar with. Chef JP also serves his Angus beef with foie gras. That’s the kind of direction we want to go to these days.”

Lim prefers adobo and sinigang as the most definitive Filipino dishes. Sinigang because it can be prepared with any souring ingredient—from sampalok to batuan to calamansi. It’s sour

and savory, he says.

“My adobo has two-part cooking process. I bake my adobo first and use the sauce as a glaze in the meat. It’s a very Western kind of approach. I then braise it and simmer slowly over low heat.”

For the food fest, Lim’s take on adobo is like a slider. He rubs the pork with sugar and salt and chars it slowly to have that smoky aftertaste. After browning the meat, he glazes it with adobo sauce. He serves the meat with coleslaw and Kaiser buns. The result: filling and flavorful with tender, barbecue-like taste.

Rankel, who has been in the Philippines for six years, prepares his pork adobo with red wine, German potatoes and carrots and topped with prawns; while his goto is packed with duck liver, foie gras, duck breast and white asparagus from Germany.

“The Best of Filipino Cuisine” runs until May 23 at Corniche Restaurant. Get a chance to win round-trip airline tickets for two to Coron, Palawan, for a minimum P5,000 spent on single receipt at Corniche’s lunch or dinner buffet.