Why there’s no such thing as comfortable stilettos | Inquirer Lifestyle ❮ ❯ 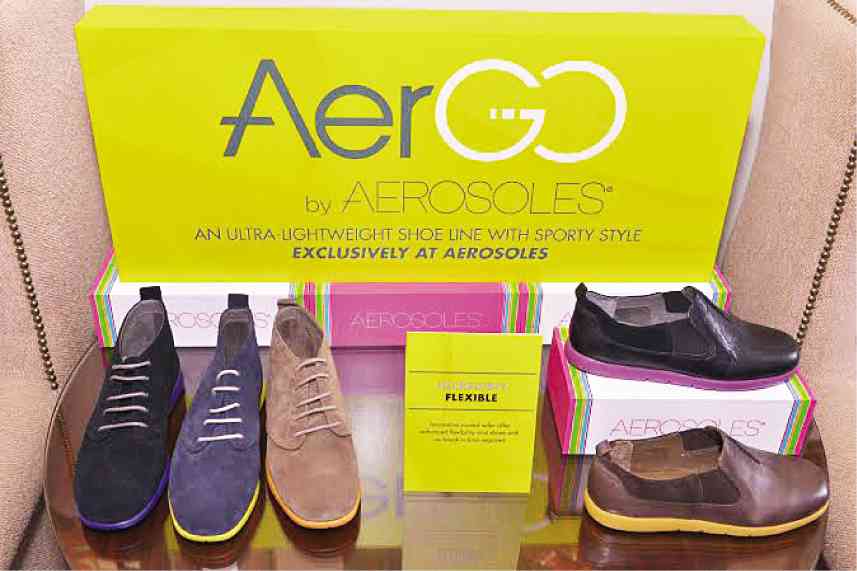 Why there’s no such thing as comfortable stilettos

Let’s get something out of the way: If you’re the kind of woman with a give-me-those-stilettos-because-who-cares-about-back-pain-and-bunions attitude toward footwear, you can stop reading. But if you belong to the tribe that’s rejoicing about the sneakers and shower-sandals trend on the spring runways, carry on.

Jules Schneider, chief executive and president of Aerosoles, has always been forthright in saying that his shoe brand isn’t a fashion line. Since its inception, Aerosoles has been about comfort, though Schneider stressed that it adapts to style trends without losing its core qualities.

“When you build shoes from the bottom up, you can put anything on the upper. We can be stylish,” Schneider said on a recent visit to present the brand’s Spring-Summer 2014 collection with its local distributor, Rustan’s.

At a tea party at Raffles Hotel in Makati City, Schneider presented the collection not with the typical runway of models, but with a technical demonstration of how Aerosoles shoes are built, literally from bottom up.

With Karen Sadick, the brand’s executive vice president, Schneider took out a diamond-patterned sole—an Aerosoles signature that’s said to act as shock absorber, taking pressure off the foot—and a leather upper. He showed that the upper is sewn to the sole inside out, and turned right side out before inserting a memory-foam inner sole.

“It’s sewn because stitching offers the most amount of flexibility, just like a garment that moves with the body,” he said.

“We put thick, high-quality inner sole, so it doesn’t lose support [as the shoe gets worn]. You will also note that it doesn’t have a counter,” he added, referring to that stiff, backside part of the shoe by the heel that gives it structure.

“It’s already broken in, so that’s instant comfort. That’s the basis of what we do.”

Sadick demonstrated that each of the shoes made this way bends all the way through, which means utter comfort. “They’re produced the way slippers are produced, so they give that comfort that’s beyond what anybody else does,” she said.

This technology called Stitch N Turn has been the foundation of the brand since it was acquired from Kenneth Cole in 1987.

“This technology gives us a chance to create different looks,” Sadick added. “You have here an update on the smoking slippers with the cutouts, made still the same way, and the Microfiber sock, which also has anti-wicking.”

Schneider also showed how Aerosoles makes high heels and wedge sandals differently from other shoemakers. He answered no when asked if one could really build a comfortable pair of stilettos.

“The last of high heels are created like you’re walking down on a steep hill, so there’s a lot of pressure on your toes. Normally, if you wear shoes like this, you’re leaning forward. Your toes are squeezed into small spaces.”

The company created its patent-pending technology called Heel Rest that smoothens out the heel, such that the pressure of the wearer’s weight is transferred on the heel, not on the toes or the ball of the foot. “We break [the weight]. What that does is that it doesn’t make you lean forward, which is bad for the back.”

He added, “You’ll begin to see more of what we’re doing in terms of technology this fall. We begin using new components, lighter, more flexible. We’ve been doing this for 26 years. We’re just making it newer and better.”

Aerosoles also has an ultra-lightweight line of sporty shoes called AerGo, which uses the same materials as “high-grade sneakers,” he said.

The brand has quite a following in the country that it has expanded to 23 stand-alone boutiques, plus a presence in all Rustan’s branches. Five more boutiques will open this year. The shoes retail from P2,950 to P3,950.

At Rustan’s, Aerosoles targets a more mature demographic. But the boutiques tend to attract even the twentysomething bracket.

“We’re finding that the younger customer wants to be comfortable,” Sadick noted. “And as long as she feels that the shoes are stylish, she’ll appreciate the comfort as well. Comfort isn’t a bad word in her mind anymore.”