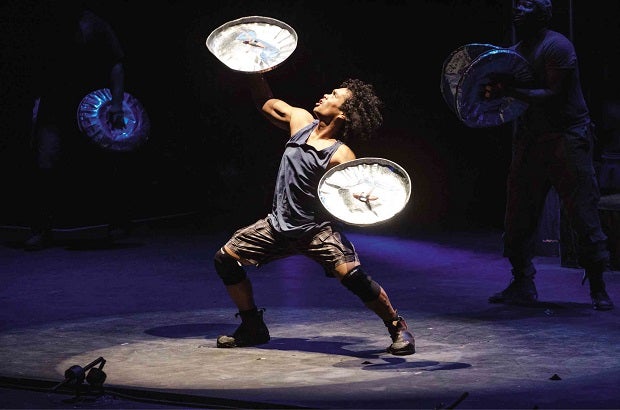 Get ready to Stomp

Twenty-three years on Broadway and 12 years at the West End has done nothing to exhaust the original chaotic allure and energetic charisma of “Stomp.”

The percussion-powered theatrical show returns to the Cultural Center of the Philippines’ Tanghalang Nicanor Abelardo on June 17 to 22.

“We are really excited about coming back to Manila,” says “Stomp” co-creator/director Steve McNicholas.

“I’m extremely excited. The last time I visited was Christmas of 1991, promoting my brother’s album ‘Puede Ba’ which was recorded in the Philippines,” said Fernandez, whose touring performances in Hawaii with his big brother Johnny (1999 “Miss Saigon” US tour alumnus) included special appearances as opening acts for Gary Valenciano and Martin Nievera.

“One of the new numbers, ‘Trolleys’—also called ‘Shopping Carts’—I love that number! When the music kicks in, it’s ‘Oh man!’ It’s such an amazing number!” said Fernandez. “I think people will also like ‘Donuts.’”

Fernandez, born to a Kapampangan father and a Visayan mother, has had the rare chance to swing from one role to another in the “Stomp” US touring production and has managed to play all eight characters in the show.

“I’m not sure yet what role they’ll have me do in the Manila production… When I went on the European tour last summer, I did the lead role—the guy who starts off the whole show,” said Fernandez, who claims to have “a little more fun” doing the show’s comedic characters.

“Stomp” has entertained 15 million people in 53 countries across five continents.

“Stomp” is presented by Lunchbox Theatrical Productions and Concertus Manila. Tickets are available at TicketWorld, call 8919999 or log on to www.ticket world.com.ph. Ticket prices range from P800 to P5,500.