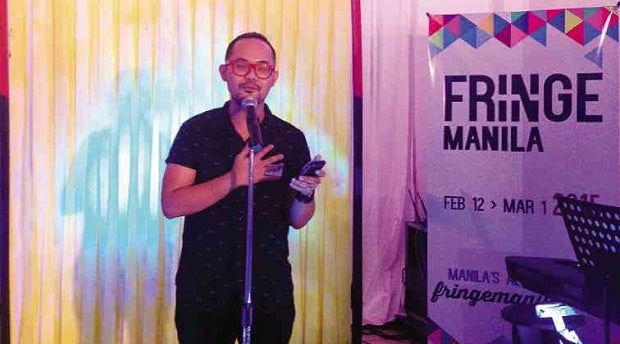 Fringe Manila is envisioned as a multiplatform arts festival where artists can do their thing their way, and it may just be the daring gig the city of Manila needs.

We met up with festival director Andrei Nikolai Pamintuan during Fringe Manila’s recent launch at 1335Mabini, an art gallery on Mabini Street that sits side by side with a colorful casino, girlie bars and videoke clubs. It was the perfect venue for the launch, if only to remind us of the character that is Manila. (When was the last time you went to Ermita?)

The place was packed with performers and supporters, and everyone seemed to know each other. We clapped and cheered after Judd Anthony Labarda’s spoken-word poetry reading and Seven Contemporary Dance Company’s modern dance piece.

People’s energy, fueled by excitement and free-flowing booze, was too high for the air-conditioning, but no one minded the heat. If that was a preview of how Fringe Manila would be in 2015, then we are looking at a vibrant thing.

Fringe Manila is Pamintuan’s idea. An advocate of supporting local artists and keeping them in the country, he moved back to the Philippines from the United States after working as venue director for FringeNYC.

Fringe, he explained, is a global festival network that started in Australia in the 1940s, and has since made its way to the US, UK, South Africa and Asia.

“There was a resurgence in the art scene when I got back here. Underground things are happening. The original theater people have been amazing, and there are lots of work we don’t know about,” he said.

These talents need an outlet for self-expression, and Fringe Manila will give them that opportunity through an open-access, free-for-all festival. There will be no theme, no audition and no discrimination. It will be crowd-sourced: Anyone can sign up to showcase anything—dance, music, literature, theater, visual arts, film, cabaret, circus—and other art stuff too difficult to categorize.

From the list, Fringe will make a cohesive program to be released in January next year. It will also serve as facilitator between the artists, venue owners, sponsors and audience. It will create a unified network under the brand “Fringe,” and, as its proponent says, “the city will own the festival.”

Fringe Manila will run for 18 days from Feb. 12 to March 1, 2015; online registration is ongoing until October this year at www.fringemanila.com.

The planning started in 2012 when Australian executive producer Brett D. McCallum got on board. He was working with the Edinburgh Festival Fringe in UK when he heard from a colleague about a “guy who wanted to produce an arts festival in the Philippines.”

“I approached Andrei; we didn’t know each other. We talked about establishing Fringe in Manila,” McCallum explained over beer. He was more relaxed after addressing the amped 1335Mabini crowd for an introduction, saying he was “very nervous”—and actually looked it. For someone who has worked in theater for 12 years, he sure had stage fright.

He has been in Manila for a year, working on Fringe.

“My first time in Philippines was for a holiday in Cebu in 2012, and I haven’t even been to Manila,” he said. “I’m very excited to return. It has been a very emotional journey to come here and contribute something.”

McCallum worked as a molecular biologist in Australia before he moved to UK to join theater—as a ticket-booth guy. He worked his way up, became an arts manager, and now he is Fringe Manila chair.

He stressed that he does not perform, and neither does he sing. “Not even in the shower,” he said, laughing. “And I’ll never go back to being a scientist!”

McCallum wants the audience to take risks in Fringe Manila. “There will be a show for everyone. They will go to see something they like and, hopefully, they will watch something else.”

Fringe festivals everywhere are “self-funded” and the Manila team has been tapping sponsors and coordinating with the government of Manila where most of the shows will be held—in tourist spots, cafés, terminals, schools.

“It’s a collaboration, and if we do it right, it will benefit all,” McCallum said. “There’s so much love about Manila and there’s so much that people don’t see.”

“Manila used to be the arts center but it has been forgotten,” Pamintuan explained. “It has become a pitstop on the way to Boracay or Palawan. No one goes to Manila anymore.”

It’s “time to reflect on contemporary culture,” he added, and bring the focus back to the country’s capital.

There were no intermissions during the launch. One act performed after another, including Ejay Yatco and the cast of the 2013 breakthrough musical “Sa Wakas,” which Pamintuan co-wrote with Marianne A.R.T. Abuan.

The night wore on with so much promise as drum beaters played. We hope that, with collective effort and enthusiasm, Fringe Manila will give Filipino artists and the weary city their much-needed break.