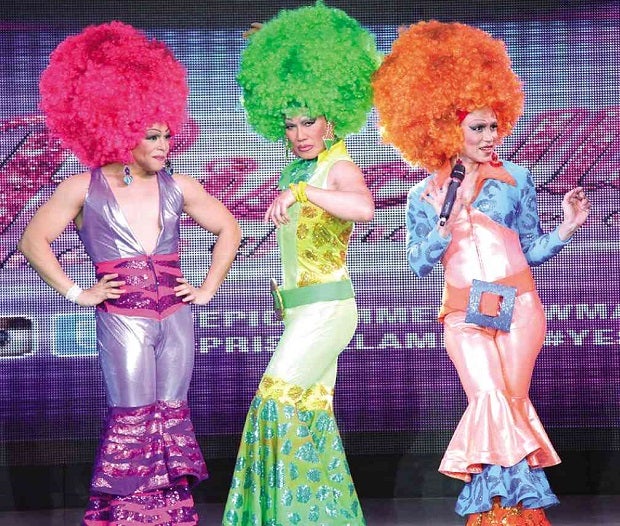 ‘Priscilla, Queen of the Desert’ is silly, daring, heartwarming

It is clear just by looking at the promo materials that Resorts World Manila’s (RWM) ongoing production of “Priscilla, Queen of the Desert” is energetic, transgressively comical, and very, very, very gay.

But Inquirer Lifestyle decided to have it reviewed by a blundering straight man who has no “gaydar” whatsoever. Presumably, the editor wants someone who can view this from an outsider’s perspective.

Now that I am done anxiously protesting my masculinity, I must say that craziness is a key to “Priscilla.” This tale of three drag queens on an improbable road trip across Australia is obviously meant to be silly, daring and heartwarming. It succeeds in all three.

The musical’s production values are superb, in some ways exceeding those of the shows I’ve seen at the Cultural Center of the Philippines. RWM’s Newport Performing Arts Theater is one of the biggest I’ve seen in the country.

The costumes are perfect. I say this with the full gravitas of a drama professor who gives A’s once every school year or so. Perfect, full marks. They need to be seen to be believed.

The cast is absolutely star-studded—Leo Valdez, Jon Santos and Red Concepcion. My mom, whom I took to see the show on Mother’s Day, was pleased to see Pinky Marquez on the playbill. She almost let out a squeal when she looked the soundtrack. It contained the songs she would have played at  full blast at 5 a.m., in my high school days.

The play has a few minor issues and one or two major ones. The acoustics could be clearer. The orchestra tended to drown out the dialogue. Significantly, many of the major songs were lip-synched. That’s not as big a criticism as it would be for other plays—because a huge part of what a drag queen does is lip-synch, and Concepcion was amazing at turning it into comedy.

But lip-synching should be used only when it’s a plot point. For the rest of the songs, only live renditions could produce the power needed for a musical of this magnitude, because a show as ostentatious and in-your-face as “Priscilla” requires extraordinarily strong suspension of disbelief.

The enormous theater and the video screens beside the stage reminded me of the Aliw Theater so beloved by Ballet Manila. But the huge video screens installed in “Priscilla” must be strategically deployed and should not distract from the live action onstage. For instance, the computer-generated background movements could confuse the viewer.

But there were a few instances when the screens allowed better glimpse of the characters’ expressions, and the camera angles were good. But on the whole, I found them too big, too bright, and too distracting.

More significantly, the backdrops seemed uninspiring. A play this energetic needed to have a busy set, something as loud and happy and shiny as the rest of the production. The video backgrounds just didn’t fit in with everything else. To me, it was  a minimalist decision in a production whose primary aesthetic was more pimped out than a garish jeepney.

This is not to say that the stage was bereft of joy. The props were as good as could be, colorful and comical. The eponymous bus was particularly well-done.

The biggest problem with the play, however, may have nothing to do with the production at all. When I look around the theater, I find the audience to be mostly from the older, elite set—and they act accordingly: Dignified, appreciative, raptly attentive, the complete opposite of the type of audience you need for a play like “Priscilla.”

“Priscilla,” by the very nature of its subject matter, is transgressive comedy. It is meant to shock and awe, to push the limits and redefine what it means to be heartwarming while being as cute and shiny as possible.

For that to happen, you need a young, rambunctious audience with a less sense of propriety, the kind of audience ready to be whipped into a froth by the actors. That’s not going to happen if you’re charging over a thousand bucks just for the cheap seats.

As it is, the cast is very good at working up the crowd, but no amount of skill can fully compensate for a wrong target audience. You also need an intimate and densely packed setting, so the theater’s enormous size may have worked against the play here.

The energy deficit may also be due in part to the pacing, which is a hair line slower than what it should have been. It’s telling that the best lines in the play are delivered by Santos, whose character’s dialogue depends on sarcastic wit rather than manic energy.

But enough complaining. The story and acting are above reproach, and the cast and crew did a fantastic job.

In the end, “Priscilla” gets a standing ovation, and most important, Mom loved it.