A night for Nerdfighters | Inquirer Lifestyle 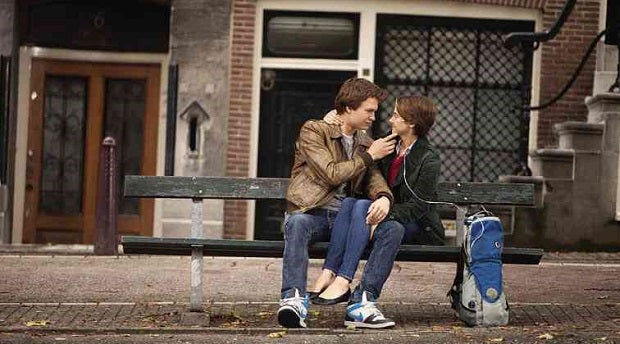 ANSEL Elgort and Shailene Woodley as Gus and Hazel

A night for Nerdfighters

It was the kind of screaming you’d normally hear at a concert, where teenage girls fall all over themselves to let their musical heroes know how much they love them.

But that night, we weren’t at a concert and there were no pop stars in sight. The unlikely object of adoration was John Green, the undeniably lovable best-selling author of “The Fault in Our Stars” and other young adult (YA) titles including “Looking For Alaska,” “An Abundance of Katherines” and “Paper Towns.”

“The Fault in Our Stars,” a touching story about two teenagers who meet in a cancer support group and eventually fall in love, has become one of the biggest YA hits of the past years, landing on numerous bestseller lists, nabbing a No. 1 spot on Time magazine’s Top 10 Fiction Books of 2012 and earning the devotion of numerous readers, teens and older.

Film rights were secured on the same month “The Fault in Our Stars” was published. Fans have been waiting to watch the film adaptation of their beloved book for over two years now. For most of them, the wait will end next month but some lucky fans have gotten the chance to see the film earlier—at the advanced screening in New York on May 3 and at special Little Infinities screenings in 12 different countries including the United Kingdom, Ireland, Italy, Germany, Denmark, Sweden, New Zealand, Mexico, Chile, Argentina, Brazil and the Philippines.

Distributor 20th Century Fox ran an online promo in the Philippines last month, choosing 60 lucky fans out of more than 4,000 hopefuls and giving them two tickets each to the screening held at Greenbelt 3 last May 12.

We couldn’t blame them for screaming.

They didn’t just scream for Green, they also did for the film’s lead stars Shailene Woodley and Ansel Elgort, who play Hazel Grace Lancaster and Augustus Waters, respectively, and for musician Ed Sheeran, who wrote “All of the Stars” for the film’s soundtrack.

The cast surprised the audience with special video messages; fans swooned when Green made special mention of Filipino Nerdfighters. (Followers of Green and his brother Hank’s YouTube video blog VlogBrothers are called Nerdfighters—people who “are made of awesome” and “who fight against suck.”)

The screaming continued when the movie started and Hazel and Gus first appeared onscreen, but the fans quieted down as the story unfolded. There were tears, a lot of tears, and, as the credits rolled, applause.

Super caught up with some fans after the screening—18-year-old student Joanna Baltazar and her 26-year-old sister Frances; proud Nerdfighters and administrators of the @JohnGreenPH Twitter account, 15-year-old Kisha Dana A. Cabuyadao, 15-year-old Rogelen Antido, 15-year-old Kyla Gail Azucena and 14-year-old Miguel Louis Galang. They talked about Green, “Fault,” their favorite scenes and quotes, and why they thought the movie was “worth the wait.” (Spoilers removed, of course.)

How many times have you read the book?

Rogelen: Once. Because once is enough. I can’t contain my “feels” anymore.

Kyla: Once. I usually don’t reread books. I like keeping the memory of the first time I read it.

Miguel: One time. But I do go back to my favorite scenes.

Why do you love “The Fault in Our Stars”?

Frances: It really touches you.

Kisha: I love the characters. They inspire me a lot. Even if they’re sick, they try their best to be better. John Green wrote it very well. We learned a lot from it.’

Kyla: How the characters, the cancer survivors, express themselves, how they enjoy themselves. They’re trying to live their lives even though they’re feeling something inside.

What did you think of the movie?

Joanna: It was perfect.

Frances: It’s really touching. It will change you and your perspective in life.

Kisha: The movie is very faithful to the book. All the important details were there. Naiyak kami nang sobra.

Rogelen: Before it came out, I was nervous. I was afraid that, like other movies based on books, it wouldn’t be satisfying. But I was also comfortable because I knew John Green was there while they were filming. I knew nasusubaybayan niya. Today, when I woke up, I thought, “Oh my gosh.” I thought about my favorite scene at the gas station. I wanted to see that, I wanted to feel it. When I watched the movie, I said, ‘Wow. They got it.’ Exactly. They delivered. ’Yung hinahanap ko, nandoon.”

Kyla: It’s great. They transformed the book into a movie without so many changes. I’m really happy about that.

Miguel: It’s very, very faithful to the book, one of the most faithful adaptations I have ever watched. I loved everything.

Frances: When they first met. It’s so kilig.

Kyla: The swing set scene. And when they made out in Anne Frank’s house.

Joanna: Do I really have to choose? Hazel Grace, Isaac and Augustus.

Kyla: Hazel Grace. She knows that oblivion is inevitable and that’s really the truth. You can’t escape that. And she learned to fight cancer.

Miguel: Augustus, I love his personality so much and how he views life.

Joanna: “The Fault in Our Stars” talaga.

Rogelen: “The Fault in Our Stars.” It was my first John Green book.

Miguel: “An Abundance of Katherines.”

What did you think of Shailene and Ansel? Did you like the casting?

Rogelen: Perfect. I worship Shailene and Ansel a lot. I love their OTP. (One true pairing—Ed.)

Joanna: “I fell in love with you the way you fall asleep: slowly, then all at once.”

Frances: It’s on my shoe! “It would be a privilege to have my heart broken by you.”

Kisha: “The world is not a wish-granting factory.”

Rogelen: Ang dami, pero gusto ko,  “It would be a privilege to have my heart broken by you.” And “Pain demands to be felt.” And  “Okay? Okay.” Oh my god, so much “feels.”

Kyla: “You don’t know how thankful I am for our little infinity.” Because people, in their lives, they feel that moment for only a short time and when you’re there, you shouldn’t escape from that, you should really go with it.

Miguel: “Some infinities are bigger than other infinities.”

Do you have a message for fans who are dying to see the movie?

Joanna: It’s gonna be worth the wait.

Frances: They should have a box of tissues with them.

Kisha: Very worth the wait. Malapit na ’yung June. There will be a lot of tears so be ready.

Rogelen: It’s worth it. Totally worth it. You should watch it. Dala kayo ng tissue and prepare yourself… baka mawalan kayo ng oxygen.

Kyla: Get your tissue ready. And bring a friend because if you don’t, you won’t have a shoulder to cry on. You’ll be a little bit lonely.

Miguel: Watch it. It’s going to be the best decision of your life. Promise.

Are you going to watch the movie again?

“The Fault in Our Stars” will open in Philippine cinemas on June 5. Use the hashtag #littleinfinities.