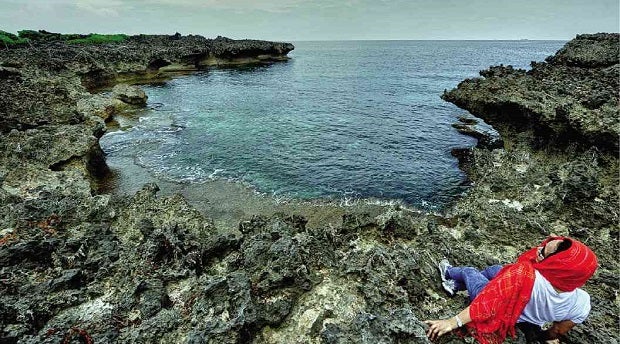 ON THE ROCKS Visitors are offered a spectacular view of the mysterious Paratec Beach in Burgos town, Pangasinan province, perched on the jagged black rocks atop a hill. EV ESPIRITU/Inquirer Northern Luzon

BANI, Philippines—There are less traveled places beyond Alaminos City’s much frequented Hundred Islands National Park in Pangasinan province, where the weary traveler can pause, relax and appreciate nature and the simple joys of rural living.

Bani, in western Pangasinan, is a sleepy resort town between Alaminos and Bolinao town that hogged the headlines in the 1990s when its residents rallied against the construction of a cement plant in their midst.

But a few have discovered Bani’s beaches that face the West Philippine Sea, each blessed with its own magnificence and allure. Further down the coast lies Burgos town, appearing from afar as a landscape of jagged coralline rocks.

That is, until travelers come up close enough to marvel at the rock formations that dot its beaches.

Fishermen used to be the only ones who knew about these places. “We would then tell our relatives about the beaches, so they come to Bani or Burgos with their families, especially during Holy Week,” a resident said.

These days, more people have been taking the hourlong drive from Alaminos to Bani to enjoy nature at its finest at Surip Beach in Barangay Dacap Sur, a cove walled in by rock formations and lined with corals.

“Once you come to a coral beach like this, you would not want to go to a sandy beach anymore. Coral beaches offer more excitement because aside from swimming, you can go snorkeling or do some recreational fishing,” said former Bani Mayor Gabriel Navarro, whose family owns Surip Mountain Beach Resort.

The flat corals that cover the beach have small openings, called “baby pools,” which trap fish during low tide. Beachcombers can have fun chasing after the fish. Some of these openings are as narrow as 5 square meters and are less than a meter deep at low tide. The pools are also safe for children.

Bani also boasts of Tobong Beach in San Simon village, which faces the Lingayen Gulf. Tobong is a kilometer-long stretch of both sand and coral, backdropped by hills where wild flowers jut out of the tree line.

Close by is a river, running beneath thick foliage, which drains to the sea. “The river’s clear water is home to fish, like eel, gourami and shrimp, and many more,” said Danilo Ortaleza, a fisherman.

Tobong Beach is often deserted at daytime. At dusk, fishermen from adjoining villages come to retrieve their boats that they have docked on the beach, seemingly oblivious to the natural beauty around them as they set out to sea.

Out in Burgos, which is an hour’s drive from Bani, travelers head to Paratec Beach, one of many beaches along Ilio-ilio village of this western Pangasinan town.

The 500-sq m cove of Paratec is surrounded by black rocky hills. But fishermen assure visitors that the rocks are smooth and that it’s OK to walk straight to the top if they want a better view of Paratec’s clear waters.

The waves are usually calm during summer but there are months when the waves rise high enough to smash onto the rocky hills, said John Asuncion, a member of the town’s tourism council.

Up in the hills, visitors find a spot that offers a safe and comfortable view of the black rocks. Down below, the waters are darkened by corals and the sea grass growing on the sea floor. But these waters are shallow and safe even for amateur swimmers.

It’s the type of destination that draws in brave hearts or hard-core adventure types.

“Some people come and dive from one of the highest points of the rock formation,” said Sharon Boniol-Lapez, Burgos tourism officer.

Tourists willing to take another 100-meter trek from Paratec’s rocky hills may discover a “friendlier” beach, which drew a group of teenagers to the place when the Inquirer visited last week.

Further along Ilio-ilio is Pao Beach, which is almost as mysterious as Paratec Beach.

Pao is a wide span of beach covered by beige-colored sand. “Hardly anyone comes here,” said Nasario Villanueva, 87, who belongs to a close-knit community of fishermen who live in the area.  Villanueva and his wife Perlita, 72, live in a shack that offers a stunning view of the sea.

“This beach is safe for children, as they can stay in the water and not be swept away to the deeper part of the sea,” Lapez said.

Ilio-ilio is also home to the white sand-covered Caboangoan Beach, another cove frequented by beachcombers during summer.

For those looking for white sand beaches, the town of Dasol offers its Tambobong Beach in the villages of Osmeña and Tambobong. For people looking for other activities, Bani has several caves for exploring, the biggest of which are Nalsoc in Barangay Colayo and Angel in Barangay Centro Toma.

Nalsoc Cave is home to a subterranean river that empties into the West Philippine Sea, as it passes through miles of a natural archway filled with stalactites and stalagmites. This cave has made it to the list of several European tourist manuals.

The cave, however, has been vandalized, with some visitors breaking off stalactites and stalagmites to keep as souvenirs.

Next to Nalsoc, Angel Cave is virtually untouched. The Burgos government plans to place it under the protection of the United Nations Educational, Scientific and Cultural Organization (Unesco).

No one knows how deep the cave is but a survey team commissioned by the local government has discovered natural water slides, pool chambers, terraces and different formations of stalactites and stalagmites 4 km into the cavern.

Bani also boasts of a mangrove forest in Bangrin, a revived ecotourism post that now serves as a fish and bird sanctuary.

Former Bani Mayor Marcelo Navarro Jr. said Bangrin used to be a 2,000-hectare natural mangrove forest but it was decimated in the 1980s to make way for fishpond development. Navarro’s father, Marcelo Sr., started a project to revive the forest in 1990, which has grown to more than 50 hectares and has become a tourist attraction of the town.

The place has been listed as one of the 13 birdwatching sites in the country in the book “Bird Watching in the Philippines.”

The Baliwangga Falls in Barangay Ranao is also a tourist attraction. But it is better to go there when the rain starts, as the prolonged summer season tends to dry it up, Navarro said.

In the Know: Getting there

Bani is 266 kilometers from Metro Manila. To reach Bani, take a bus (Victory Liner or Five Star) from Pasay City or Cubao, Quezon City bound for Bolinao. Fare is about P400, one-way.

Get off in front of the Bani town hall or at Tiep village (10 km away from the town proper) where tricycles can take you to your destination. A group of four to five people can rent a tricycle to Surip Beach for P200 (one-way trip). Visitors are advised to bring their own food because there are no restaurants in the area.

To reach Burgos town from Metro Manila, take a bus bound for Alaminos City (P400 fare one-way). Once in Alaminos, take another bus or jeepney to Burgos. There are jeepneys that ply the route to Surip Beach (from 9 to 10 a.m., 1 p.m. and from 3 to 4 p.m.) or you may opt to rent a tricycle for P250 (one-way).

Those planning to visit Bani may contact tourism officer Emmanuel Olores at (075) 5532010 and municipal planning and development officer Rodel Quibuyen at 0920-9167433.

All shapes, colors, sizes of watermelons