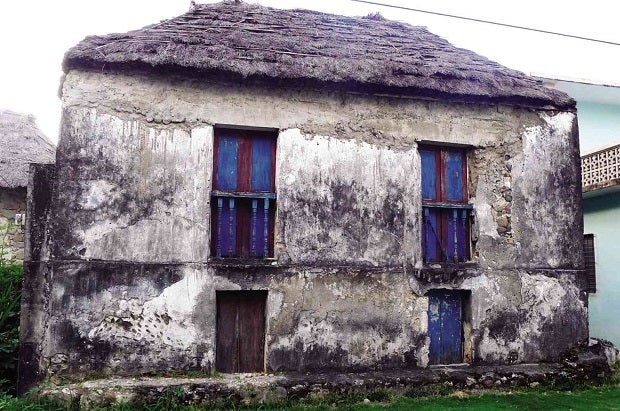 BUILT OF NATURE This vintage stone house that stands near the colonial San Vicente Ferrer Church in Sabtang town, Batanes province, has roofing and walls 61 centimeters thick and made of cogon, reed, lime, egg white and cut stone. Picture perfect, its Mediterranean blue windows are picturesque counterpoints to the earthen hues of the structure. MANDY NAVASERO/CONTRIBUTOR

Boat ride on furious waves a preface to surprising Sabtang

As the “falowa” leaves Ivana Port on the main island of Batan to tread the treacherous waves of the Pacific Ocean leading to Sabtang, one can easily spot the ghostly crest of Mt. Iraya looming in the sky-blue distance, a prelude to the breathtaking beauty of this northernmost of Philippine provinces, Batanes.

The falowa is a seaworthy motorized dinghy that traverses the vast expanse of the waters of Bashi Channel and Balintang Channel where the Pacific Ocean merges with the China Sea. The boat connects residents from the main islands of Batan, Itbayat and Sabtang to each other, providing a reliable means of transportation for culture and commerce in the islands, including a fast-growing tourism industry.

In the balmy April daylight, the waves glisten even as they briefly petrify the visitors with both their height and their unpredictability, surging onwards from out of nowhere when least expected, then making like petulant juveniles shaking the boat and its stunned passengers, only to vanish minutes later. The peaceful ride is then casually resumed.

Midway through the trip, our group chances upon enormous waves that frighten several passengers who hold onto the railings while ardently mumbling entreaties to the deities.  But the steady hands of the skipper and his crew effortlessly steer the boat, enabling it to slither through the waves like a surgeon adeptly cutting through the tissue, so the falowa barely trembled in its ascent. A solitary flying fish darts from a distance.

The trip to Sabtang takes a little less than an hour, our guide Rogers Amboy tells us, so enjoy the ride. The group met him the day before, a proud Ivatan in his mid-50s who knows the infinitesimal details of his proud heritage like the back of his hand. A virtual repository of historical facts and folk trivia, he is at ease talking to both the visitors and the locals. His knowledge of English is almost perfect, despite the obvious trace of the guttural nature of the northern tongues.

The boatmen are hardy chaps, bronzed from relentless exposure to the elements, the almost mystical melange of the sun, the wind and the saltwater wrapping the islands and their surroundings. They are proud offspring of a race that has been molded by centuries of geographical isolation from the rest of the world.

The Ivatan are typically Malayan but their features are softer—perhaps gentler is a better word—than the rest in this northern part of the country. The Ilocano come across as edgier, given their harsh landscape of undulating plains whipped by blistering winds, while the tribesmen of the Cordillera ranges are as morose and dour as the cold weather they are attuned to.

Amboy likes to talk a lot—this probably comes with the job description—but there is no trace of contrived earnestness or even perfunctory candor that one would expect from someone who does this same routine several times a year.  His enthusiasm is incredible, but his love for the islands he calls home is even more amazing.

Near the end of the trip, when the novelty of the enormous waves is starting to wear out and most of the passengers are lulled to private introspection by the gentle lurches of the falowa, Amboy stops speaking with a far-off cadence in his voice. For a long time we sit in silence listening to the waves beating against the sides of the boat.

The only extraneous sound is the incessant clicking of cameras that try to capture the beauty of the surroundings.

With the near-noontime sunlight, the sky is now incredibly translucent and the ragged coastlines of Sabtang etched sharply against the azure west assume an overwhelming loveliness.

An imposing lighthouse, an off-white lookout hub with a deep brown top, stands near the dock and provides a picture-perfect preface to the many charms and surprises of the island. Its blue window frames add a quaint counterpoint to the earth hues of the hilly ridge on which the lighthouse rests.

In the following hours, the group will ride through the four towns of Sabtang and be amazed at the utter simplicity of the Ivatan way of life that has not significantly changed over the centuries. It is said that when the Spaniards first came to the islands to colonize the people, the governor general had to issue a decree to force the Ivatan to leave their beloved mountain refuge.

The province’s charm lies in the remoteness of its location, the tempestuous climate and the tenacity of a people to safeguard an indigenous lifestyle that remains remarkably well preserved.

As we come across the sight of men taking swigs of “palek,” a local wine made from sugar cane, to ward off the cold and probably the tedium especially during stormy  days when they are unable to head to the coast to catch fish, one cannot help but think of returning again.

The drink tastes like mildly sweetened cider, with a surprising gentle kick at the edge of each sip.

Strange, but that’s exactly how it feels to experience Batanes for the first, but, we vowed, certainly not the last time.

‘We Were Ivatan in an Earlier Life’

Fan rooms for P400–the best of Batanes on a budget