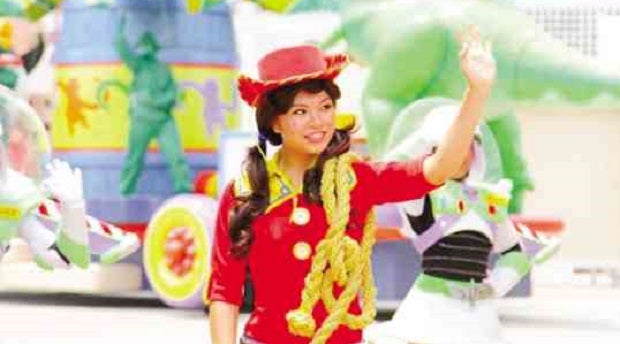 I THINK she is a cowgirl or something here.

The descent of angels

It must have been during the early American period when parents began naming their kids “Baby Girl” and “Baby Boy” (lest they forget). In time the girls ended up becoming, of course, Lola Baby or Lola Girlie, and the guys Lolo Boy or Lolo Boyet.  A counterpart today could be “Missy” who will, too, inevitably become “Miss Missy” or “Mrs. Missy.”

During supper with my son’s family, backward me was informed that today’s favorite names for girls are Anica, Samantha, Sabrina, Chloe, Daphne, Trisha, Zoe.  Among the boys, Justin, Ryan, Dylan, Rafa, Cedric, Dexter (more or less).

A not surprising observation is that extended family househelp are named Michelle, Charlene, Geraldine, Charlotte, Mary Joy, Cherie Ann, Nicole, Lovely, Cattleya, April Joy, Crystallene, and Madonna. Except for the last few imaginative ones, the rest seem to have been our own favored names only a few seasons ago. (Which goes to show how closely admiring maids follow their mistresses’ tastes.)

Patriotic fervor during the first decade of the American Occupation produced names like Luzviminda, Ameurfina (America-Europe-Philippines), Dakila, Bayani, Patria, Rizalina. It was also the beginning of Filipino names—Ligaya, Diwata, Dalisay, Magsikap, Tagumpay, Dakila, Luningning, Liwayway, Paraluman and, in tribute to the zarzuela, Bituin.  (The anti-friar Aglipayans were the first to use them).

Many of the old names survived the Second World War, but the longer ones—like Eufrocina and Quitoriano, Obdulia and Sisenando—were lost in transit and thenceforward considered funny. Soon, even Casimiro Bucaycay got translated into Cashmere Bouquet. Not a single Canuto was left.

Shorter names of three or two syllables, instead of four, became the “in” thing.  Most names were still from the calendar of saints, though. Runaway favorites of the ’50s were St. Teresita (Teresing, Tita, Titang, Tess, Tessie, Terry, Techie, Ching, Chit, Chiching). Tising and Esang dropped by the wayside. Lourdes, Ludy, Lulu, Luli, Desi and Lourds were still in the running, though no longer

nicknamed Luding or Onding.  Mercedes (Ditas and Mercy) lived on, but not Chedeng, which became a car.

The old nicknaming seemed so casual but was actually quite rigid. Diosdados were never Dodongs, only Conrados were.  Loleng was a Dolores, but never a Soledad. Several decades later, the nickname code had relaxed so much that an Ernestina could be a Bingbing, Cristina, a Jing Jing; Muriel, a Twink; Ricardo, a Tito; Florencio, a Floy; Cornelio, a Corny. Thankfully, Pantaleon didn’t end up a Panty.

The same Christian male names stuck on for a whole century, as immutable as the black, and brown of men’s pants. The pet names, however, improved in the ’50s and ’60s with the introduction of blue jeans. Now there was Ed or Eddie (for Eduardo, Edmundo, Edgardo), Fred and Freddie (for Federico, Alfredo), Bert (for Norberto, Roberto, Gilberto), Vic (for Victor and Vicente), Danny for Daniel and Danilo), Manny (for Manuel and Emmanuel). In place of “ing” or “y” endings, “s” became the new additive. Hence Ricardo became Cards, Conrado became Rads, Godo became Gods, Pepe became Peps.

Dissatisfied guys stuck with stale, Spanish-period names could still apply for legal change of name. The possibilities of the day: Juan Andador to Johnny Walker, Pedro Makabenta for Peter Sellers, Leon Mangubat for Tiger Woods. Not to mention Ginang Bukid, who can become Mrs. Fields.

I decided to include my “angel” as a PS, since my article is short.