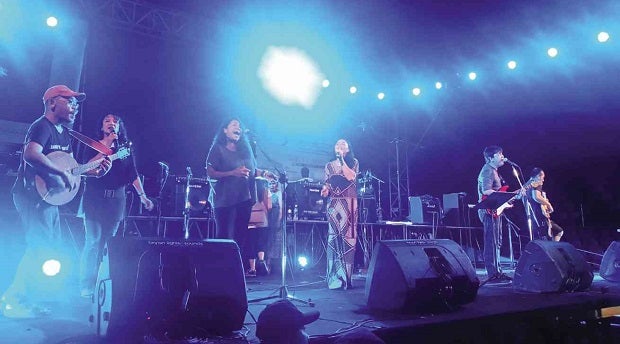 San Pedro Bay looks calm as we take in the seaside view from the Veranda Café of Leyte Park Resort Hotel in Tacloban. Jutting out in the horizon is Mount Danglay, which our friend Jerby Santo says he was scared of when he was a kid. His mom used to tell him that naughty children were snatched by monsters and brought to that mountain.

Jerby, a former radio DJ in Tacloban who was working in Phnom Penh, Cambodia, when Supertyphoon “Yolanda” demolished Eastern Visayas, is now back in his hometown to help in recovery and rehabilitation efforts. The International Organization for Migration (IOM), one of the first humanitarian groups to extend aid to Leyte, has hired Jerby to boost its communications team.

There’s not much nightlife yet in Tacloban, but Jerby says we should check out the free concert that IOM is mounting the day after our arrival, exactly six months after Yolanda. Dubbed “Padayon, Tacloban!,” the show features more than 10 local bands that are celebrating their second lives after surviving the tragedy.

A bit of anxiety and depression set in, moments before the concert, because it’s been raining. Water is gushing down the roof and floor of the venue, the Tacloban Astrodome (or the Tacloban City Convention Center), which has also been damaged by Yolanda.

But hope springs eternal; soon the rain stops and the show begins.

The bands are allowed one or two songs each to perform. We are impressed because all of them, save for one group, play their own compositions.

Kulahig, first on the bill, seems to be exorcising the pain of death with anguished chants amid tribal beats.

What follows are heartfelt expressions of shock, loss, despair and desolation that transform into catharsis and hope through music.

These bands are almost at par with the ones we watch around Metro Manila; we think the Tacloban artists have depth in their songwriting, which means they deserve a wider audience, whether live or in recordings.

There’s La Familia and Jay-D which both favor the hip-hop sound; Rex Makabenta who shines in folk; and Kwadro, Lady Suzette, The Guerillas, Succubus, Repapipz, Lazy Susan, the New Riddim Show which all explore the artistic freedom and popular acceptance that rock ‘n’ roll affords.

Some of the foreigners in the audience get up and dance; one of them looks extremely happy while holding a San Miguel Beer Grande.

A few bands from Manila are also here to help give Taclobanons momentary respite from the struggle to bring back normalcy to their lives. Three of the artists, Geo Ong, Franchise and Pio Balbuena, are young rappers who instantly connect with the girls in the crowd. Franchise, we are told, is a Tacloban native who has moved to Manila.

Lolita Carbon, Cooky Chua (of Color It Red), Bayang Barrios and Gary Granada decide to perform as one group, with The Jerks as house band. We hope the audience heard clearly the lyrics in “Sandugo,” a new song of hope that Granada wrote in response to Yolanda.

Surprisingly, a foreign song, Sam the Sham and the Pharaoh’s 1965 hit, “Wooly Bully,” sends the concert on a high note. Everybody on the courtside is now dancing, even as the rest of the crowd in the upper sections have gone home.