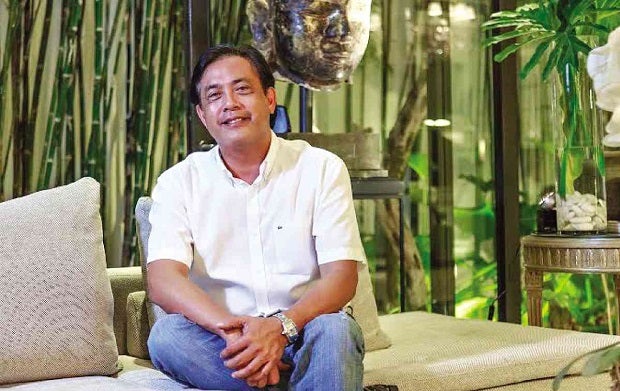 CONRAD Onglao: “You get inspired by something and it takes its on a life of its own.” PHOTO BY PJ ENRIQUEZ

On a balmy summer night, the man of the house brings us to his bedroom.

Although the ceiling is vast, it is a sanctuary of warm cream and neutral-colored elements, made even cozier by the come-hither lighting.

The bed with ultra-soft and tactile bedding invites you to plop on it. As Erik Satie’s “Trois Gymnopédies” wafts in the air, architect Conrad Onglao proceeds to give an educational tour of his home, starting with his bathroom.

The master bathroom is built with “his” and “her” sections. “For the woman, you have a bidet, and for the man, you have a urinal,” Onglao explains. “Then there’s a common shower. The windows are large, but you won’t be seen from outside.”

He then points to the vanity mirror lined with halogens on the sides—so as not to create shadows on the face. “You can adjust the lights. For women, white and yellow are the best types of light,” says Onglao, referring to the illumination that mimics daylight.

Asked why his room has a vestibule that conceals the sleeping quarters, Onglao replies, “So when you enter, I won’t be seen. No surprises! My kids don’t have that.”

More than just design templates, the master bedroom and bathroom look as if there are provisions for the future.

He has done a similar model for his client, businessman Jose “Joey” de Venecia III, who was then getting engaged. The house was built on an odd-shaped corner lot, but Onglao maximized the area with open spaces that focused on an infinity pool. (The house has since been sold.)

Among his designs are the Bahay Pangarap of Malacañang, now the official residence of President Aquino; Ayala’s Seda hotel chain; and El Nido Resort’s Pangulasian Island.

He introduced large pivot doors in the residence of shipping magnate Doris Magsaysay-Ho. It was featured in Architectural Digest, and since then has been adopted in many homes.

When Onglao was seen with Padilla, who is 10 years his junior, the public got more curious. Some people even mistook the still boyish-looking architect for an actor. Even so, he requested us not to discuss his private life.

Onglao’s new home is situated in a village with small lot sizes. On a land area of 650 sq m, he built a four-level house with a total floor area of 1,000 sqm.

Onglao says the size of his home is small compared to those of  his clients.

The Cebu residence of Michel and Amparito Lhuillier is famous for the 30-car garage and Amparito’s dressing room which is as big as a luxury condo.

Then there’s the house of an entrepreneur-triathlete which spans 4,000 sq m in floor area. Another famous client is having a 5,000-sq m house built in Laguna.

“The idea is for my kids and whoever will be my lifetime partner to settle here,” says the architect.

Onglao’s previous residences in Forbes Park, Shang Grand Tower and LPL Tower have a common denominator: aside from his collection of Oriental antiques, they were designed for the resident to have company.

Through the years, Onglao has always spoken fondly of his sons, Robert Kenneth and Michael Gabriel, who have lived with their single father since their early teens.

For this new house, the boys asked for social spaces to bring their friends over—a gym, a dark room  and a media corner.

Onglao, who loves to entertain, wanted a big kitchen with a dining area that was adjacent to the lanai.

The core of the design is the relationship between the landscape and the interiors. The rooms overlook the courtyard skirting the swimming pool.

The shaded veranda gives access to the big kitchen, which is the life of the house, and formal living and dining pavilion.

When visitors ask why the living room is at the back of the property, Onglao retorts, “Why, does it have to be in front? People get used to conventions.  They are not bold enough to redefine how one can live. The whole idea is an open house. I have no artwork except on the stairwell. The garden is the real art here.”

The house may seem very capacious for the inhabitants, especially when boys soon leave for abroad. “In the evening, the maids and the driver are in the basement,” he explains. “If it’s just the two of us—with Zsa Zsa (when she’s around)—we have three floors all to ourselves. The kitchen is all that we use. We don’t use the formal living and dining areas. Sometimes I eat in the bedroom. My kids do the same thing.”

Aside from the fact that the house could accommodate another occupant, Onglao’s house is interesting because it avoids visual clichés.

While most residences are surrounded by intimidating fences, Onglao uses plants to fence in the front—elephant ears, olympiads, selloums, delicate bamboo and ferns. They serve as a natural perimeter.

The luxurious foliage and the openness welcome visitors.

The walls are artistic as the architecture itself, coated with Venetian plaster which mimics the complexion of ancient marble.

“It’s unique and hasn’t been seen here,” says Onglao. “As an architect, being ahead gives you an edge. But people don’t get it. They say it looks unfinished.”

Because he doesn’t conform to formula, people have questioned some design strategies.

The flooring on the ground level is laden with large Italian tiles.

“The simplest design is the most difficult because you notice everything,” Onglao explains. “If you get the made-in-China tiles, the color either fades or they are uneven in finish. People think white flooring is hard to maintain and that dirt leaves marks. Then wipe it off and that’s why I put a rug at the entrance. You can’t be too OC (obsessive-compulsive). Whether you drive a Rolls Royce or a Toyota on Edsa, the car will get soiled. It has to be cleaned.”

As in his previous homes, mirrors in the foyer and at the back of the shelves abound. “Some people don’t like mirrors there, but for me it opens up the space,” he says.

Another Onglao trademark  is indirect illumination for mood. The floor cove lighting, in particular, lends its magic. “Others think that dust will settle on the cove,” Onglao says. “They get discouraged. I say, ‘Clean it.’ People ask, ‘Why so many plants?’  Then water them.  (These are) people who are too concerned about practicality that they lose the sense of style.”

True to his clean aesthetic and transitional style, Onglao maintains a restrained color palette which was inspired by his project for the Chanel boutique in Los Angeles in the 1990s.

“Chanel sends the designs from Paris. You execute them according to the laws of the country. The color theme was black-and-white, which is universal. The design just stuck with me. It’s like a blank canvas on which you can put modern or traditional pieces.”

Most of the pieces in his house have been in his possession for years. Large Buddhas, Chinese warriors, Oriental chairs, fu dogs, Muslim jars, excavated pottery and flea market finds blend with his furniture imbued with rounded classical elements.

“I want to show how these these things have evolved,” Onglao says. “Not everything has to be coordinated. I don’t like to produce a model unit.”

Asked if the Modern Asian look is dead, he explains that the furniture and furnishings are set in their proper context. “I live in Asia,” he says. “These are things that I’ve acquired through the years. The Asian elements explain my Asian roots.”

Someone once asked if Onglao could produce a European house. He explained that a chateau was impossible. “It needs to be in a one-hectare lot,” he said then. “Most lots here are small, and the houses look as if they are clumped together. In Beverly Hills, the mansions have long driveways so that they can be appreciated from a distance.”

Clearly, his work experience in America has influenced his work ethic and aesthetics. These attributes have attracted his clientele. He learned the value of research and the visceral experience of travels, such as staying at the chic Upper House boutique hotel in Hong Kong.

“I was attracted to the simplicity and consistency in design,” says Onglao. When he met with officials from Ayala Land about having a sleek look for Seda, Onglao remembered the calm, quiet style of The Upper House. So, Seda’s look turned out to be streamlined compared to many flourished hotels.

When he made a presentation to Zobel for a home renovation and expansion, Onglao researched on similarities in architecture between her native Colombia and the Philippines.

He also studied five books on architecture given him by Cuneta for inspirations for her house.

He admits getting exasperated when his staffers don’t open the design books in the office.

Another reason for Onglao’s popularity is that he doesn’t impose his taste on his clients. “I know I am just a medium,” he says. “My job is to make their dreams come true. You can’t pigeonhole me. It’s always a challenge to do something different for a client. The owner spends so much money. It’s not nice to hear the comment that it looks like somebody else’s house.”

Onglao emphasizes professionalism is as important as the design. “I tell my staff to be punctual with deadlines. In the States, if they say 5 p.m., it’s not 5:01. You have to bend over backwards to be on time. Time is money. If the client waits, you’ve lost the battle no matter how nice your design is.”

Some clients would shop with their designers and architects overseas. Being practical, he believes that style need not always be expensive. “Let’s go to Larry’s (Curtain and Upholstery in Makati), not Paris. When we sourced for banig for Pangulasian, we went to Legazpi for customized mats. If you want jars, get them from the Muslim traders.”

Ultimately, Onglao believes that design comes alive through the art de vivre. “A client once said, ‘You live better than I do.’  I approach architecture and interior as a lifestyle. When we have parties here, I put votives around the pool. I order special mats on low tables so you can eat on the floor. The napkins are linen, not paper. There are people who have the means, but don’t have the time or don’t know how to get a life.”

All his nuggets of design and lifestyle wisdom have been culled from experience. “You learn lessons in life,” he explains. “I tell Zsa Zsa that what I like about this age is that you listen to your gut. When you’re young, everything is maybe or maybe not. Now, you trust your instinct. As you need less things, there’s greater contentment.”