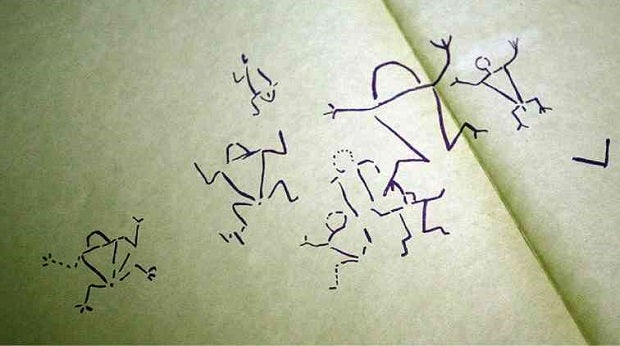 A DETAIL showing what Dr. Jesus Peralta believes to be images of sick infants drawn by their parents. His theory is that the parents applied “sympathetic magic” by drawing their children on the rock shelter to transfer their diseases onto the pumice. KIMBERLY DE LA CRUZ

Disappearance of the Angono petroglyphs inevitable, but…

Efforts to document the etchings of the Angono petroglyphs could be the best way, for now, to ensure that these are not forgotten.

Three experts involved, at one time or another, in the preservation of the 167-meter rock shelter concede they are helpless against time and the elements. The petroglyphs’ eventual erosion could take centuries, but it will happen, they warned.

Still, National Museum director Jeremy Barns said the government is doing “as best we can” to document and record the 127 symbols engraved on the pumice and delay the deterioration of the rock they were etched on.

“In the long run, no,” Barns told Inquirer Lifestyle when asked whether the site could still be preserved.

Barns was reacting to an earlier international news agency report that warned about the impending “disappearance” of the petroglyphs that are, in fact, located in Binangonan town in Rizal.

The carvings were erroneously documented as situated in nearby Angono, after the late National Artist Carlos “Botong” Francisco, who hailed from Angono, discovered them during a hike in 1965.

In separate interviews, Dr. Jesus Peralta of the National Commission on Culture and the Arts (NCCA) and Angel Bautista, acting assistant director of the National Museum, also agreed that although the petroglyphs would last some more generations, their deterioration is inevitable.

Safeguarding the site could help retard this deterioration, however, they added.

“It’s the same with buildings and all kinds of cultural properties exposed to the outdoors. We cannot put everything in an airtight archival storage. At least we’ll do our best to retard the deterioration, that’s what our mandate really is,” Barns said.

But at the moment, Barns said 3D scanning is the best way to record the endangered engravings. He said the new technology takes “only two minutes” to scan the entire rock shelter.

The resulting 3D print, he added, can be used to determine the possible age of the grooves of the etchings.

Scanning would also allow parties wanting to study the petroglyphs to replicate them in any preferred scale, depending on one’s specifications.

In theory, this means the petroglyphs could be cloned and studied without human hands touching the real thing. The models could then be used for exhibition purposes, interactive exhibits and scholastic studies, Barns said.

The first step to delay further erosion is to protect the site from human intervention, Bautista said. “That’s why we constructed a boardwalk (where visitors could stay so) intervention should be minimal.”

He added that signages would soon be installed at the site to explain the significance of the petroglyphs.

Meanwhile, conservators hired by the National Museum constantly monitor the conditions at the site.

There’s a satellite branch of the Museum and a washroom at the site to accommodate visitors. A staff of eight consists of four security guards, two office personnel and two janitors.

Peralta, a member of the NCCA intangible heritage committee and a former senior director of the National Museum, said the site could use more employees.

“It’s not just about guarding the area. You have to maintain the environment. The easiest thing to do so far is to maintain the vegetation in front of the rock shelter to protect it from the elements,” he noted.

Peralta is an archeologist-anthropologist who was assigned to study and document the petroglyphs shortly after their discovery. He worked with a team of zoologists, botanists and other scientists.

Eight years later, in 1973, Peralta did a masteral dissertation on his findings. He said the 167-m frontage of the 3,000-year-old petroglyphs desperately needs trained personnel who can ensure the etchings are adequately protected.

Trouble is, the National Museum cannot hire staff and assign them to the area. “Just like the rest of the government, you cannot create positions for trained people who will be assigned to the site,” Peralta said.

Bautista, an archeologist and protégé of Peralta, noted that the national government allotted “close to P1 billion” to the National Museum this year, a relatively bigger budget compared to the average P300 million it usually received.

The bigger amount would help the museum protect the petroglyphs and other archeological sites considered culture treasures around the country.

With more funds, the museum was able to conduct a public bidding for the rehabilitation of the satellite museum and the boardwalk at the petroglyph site, Bautista said.

Antipolo Properties, developer of a private residential area where the petroglyphs are located, has donated the land where it stands.

Barns said another priority is the electrification of the area.

Local government officials said they are simply waiting for word from the National Museum about plans for added security.

Peralta said attempts were made to preserve the site in the 1960s. One of these, he recalled, involved casting a portion with plaster of Paris.

The separator applied to the pumice caused stains and discouraged more trials. Peralta said the plaster cast should still be in the National Museum.

While more ideas on preservation were aired, there was no experimentation of actual implementation. Authorities didn’t want to risk destroying the portion of the petroglyph to be experimented on.

“Once you make a mistake, you wreck it,” Peralta explained. One idea was to “impregnate” the grooves with resin to record their dimensions. “But if there were temperature changes, the part of the wall that the resin impregnated would peel off. Pumice is very soft, you can draw on it with your fingernail,” he noted.

Another idea was to reforest the area to prevent further weathering of the rock shelter. The petroglyphs face northwest and are exposed to the harsh sun in the afternoon, causing greater damage.

Botong Francisco had an even more grandiose plan: How about enclosing the whole thing inside a dome?

If the dome idea wasn’t outrageous enough, scrounging for funds made it difficult for the proposal to take off. Peralta said he had already grown “numb with frustration” over the years because of funding problems.

“But I understand realities.  The government has other priorities,” he added.

Years after the discovery, Peralta was very aggressive in seeking financial assistance from private benefactors. Although the donations were not officially audited, Peralta took pains to report to these generous souls how their offering was spent.

Peralta said current technology should give the National Museum more options in preservation. “There are now technologies where you can test the surfaces of the grooves. The amount of light that falls on these can be measured to provide data,” he noted.

Simple carbon dating is a more viable option. “We have the knowledge but we do not have the equipment,” Peralta lamented.

“Eventually, the petroglyphs will go. Why don’t we create another cave nearby and reconstruct something like it? Something like it using a more permanent material, a replica? Of course, it’s just an idea,” he added.

Aside from the petroglyphs, Peralta said similar archeological treasures around the archipelago would benefit from similar attention from the government.

Cagayan Valley and Singnapan in Palawan, for example, also have petrographs or coal drawings. The Anda Peninsula in Bohol has red hematite handprints left in the open air.

Alab town in Bontoc also has petroglyphs hidden in an elevated area accessible only by crossing the Chico River, Peralta said.

How did Peralta come up with the age estimate of 3,000 years?

The archeologist said artifacts that the exploring team recovered outside the cave consisted of Paleolithic stone equipment, including two flake tools used for cutting, a core tool probably designed to cut trees and a Neolithic adz—a blunt object reminiscent of the modern axe.

There were also “very fragmented” bits of pottery.

The stone tools recovered were polished and had handles, indicative of those used in the late Neolithic Age.

He expressed dismay over the earlier wire report, where he was quoted as saying the petroglyphs will “eventually…disappear” and that “preservation is out of the question.”

He said the quote was based on his 40-year-old masteral dissertation, but was not made clear in the wire report. “I have never met the guy. He probably read my articles at the National Museum and started to quote me.”

A story of parental love

More than a mere archeological treasure, the petroglyphs tell a story of parental love, faith and the supernatural.

Peralta theorized that troubled parents with infirm children could have carved symbols into the soft pumice to “transfer” the young ones’ sickness onto the rocks.

“It’s sympathetic magic, transferring the effects to something else,” the archeologist-anthropologist said.

Peralta noted that the “cultural mental template” of that ancient generation also involved a belief system where communities held rituals and used symbols to communicate the concepts they espoused.

His dissertation pointed out that the anthropomorphic forms he described as “trapezoidal bodies” could have been drawings of infants.

“The arms and legs in the line drawings are flexed. Imagine a baby stretching from a fetal position,” he said.

These “baby” images, described in a photo caption that appeared in the Inquirer earlier as “like a frog,” are repeated throughout the rock shelter.

Peralta believes that over time, parents of sick children drew these images to get rid of their ailments.

He added it was possible that a “high” infant mortality in the community may have triggered the drawings. “I think it was some sort of a ritual… Sakaling may sakit ang anak mo, you undergo a ritual, carve the image of the child and transfer the sickness there. That’s the closest I could get (to explaining the engravings),” said Peralta, who also works as a consultant of the NCCA National Living Treasures Award committee.

Peralta also recalled a time when the exploring team was recording the images using cameras, and a specific portion of the petroglyphs would not appear in the photographs.

“I tried several times with different cameras but the image would not appear. Fr. Evangelista of the San Miguel Church near Malacañang offered to bless the site. Only after that did I capture the image,” he said.

It was the image of the pregnant woman and a child that he had difficulty photographing.

More than time and the elements, Peralta said the petroglyphs’ greatest enemies are humans. Human encroachment is a threat.

Apart from the residential development in the area, there are reports that mining activities also threaten to hasten the rock shelter’s deterioration.

“More than nature, it is the people. Nature is slow but man can be very destructive,” Peralta said.