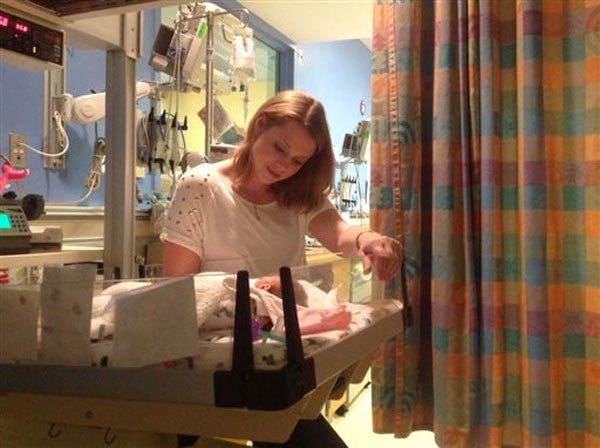 In this August 2013 photo provided by the family, Erica Steadman checks on her daughter Evelyn in the neonatal intensive care unit at the University of Chicago's Comer Children's Hospital in Chicago, shortly after Evelyn's birth. Evelyn was born with brain damage due to a virus known as Cytomegalovirus, or CMV. AP

Silent virus a rare, dangerous risk for the unborn

CHICAGO— It’s a common, usually harmless virus. But in a rare, unlucky set of circumstances, it can be devastating for infants whose mothers become infected during pregnancy.

Brain damage, deafness and other birth defects are among potential problems when women inadvertently transmit the virus in the womb. Because those complications are so rare, most people have never heard of CMV — shorthand for cytomegalovirus.

Infectious disease specialists, parents of affected children and, now, some legislators, are trying to spread awareness about the virus.

Erica Steadman learned about CMV when her daughter Evelyn was born with a small head and probable brain damage last year. The baby is deaf and potentially faces developmental problems.

“It’s pretty devastating to us. I did everything I was supposed to do when I was pregnant to make sure she was healthy and I didn’t know about this one thing,” said Steadman, who lives in Crete, Illinois, outside Chicago. “We have to face the consequences of that.”

CMV is related to germs that cause genital herpes, cold sores, and chickenpox. It spreads by exposure to body fluids from an infected person. Infections are usually silent but can also cause sore throats and fatigue.

However, the virus can be serious for people with weakened immune systems, including HIV-infected patients and organ transplant recipients. It can also interfere with prenatal brain growth.

The chances of getting infected while pregnant are small, and the chances of passing along the virus in utero are even smaller. Of about 4 million annual U.S. births, about 30,000 babies — less than 1 percent — are born with a CMV infection. About 5,000 of those babies will have CMV-related permanent problems.

The first law in the U.S. mandating a CMV awareness campaign took effect last July in Utah. It requires urine or saliva tests in newborns who fail already required hearing tests. Studies suggest early treatment with anti-viral medicine may limit hearing loss and may benefit the child’s development, too.

“This is something that no mother should ever have to face,” Armstrong wrote in testimony supporting that measure, which didn’t get approved before the legislative session ended this month.

The Illinois measure stalled earlier this year because of funding problems and opposition from the Illinois State Medical Society, which called proposed newborn CMV testing an attempt to legislate doctors’ jobs. But state Rep. Elaine Nekritz, the bill’s sponsor, declared partial victory because “we got the word out.”

All U.S. newborns get blood tests to screen for at least 30 rare but serious diseases and undergo hearing tests before leaving the hospital. Most experts don’t recommend routine CMV testing in newborns, partly because congenital CMV is uncommon and usually causes no problems. Also, CMV screening would subject newborns to a separate test, since blood tests aren’t ideal for detecting the virus, Demmler-Harrison said.

Pregnant women who contract the virus often get it from young children, who tend to be more contagious than adults, Demmler-Harrison said.

The CDC recommends hygiene measures that may reduce the chances of getting infected. These include not sharing food, utensils or toothbrushes used by young children; and thorough hand-washing after changing diapers, handling children’s toys or wiping their noses.

Research suggests a drug used for preventing CMV infection from organ transplants might reduce the chances of infected pregnant women passing the virus to their fetuses. A government study is underway to test that idea.

Efforts to develop a CMV vaccine for adults or children have proved challenging, but studies are ongoing and “we’re hopeful,” said Dr. Ken Alexander, an infectious disease specialist at the University of Chicago.