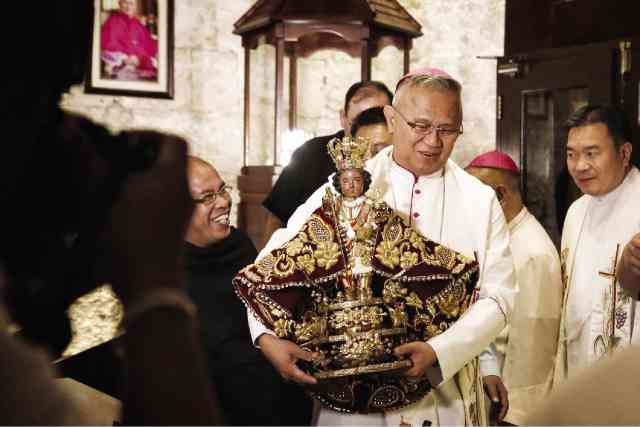 The Santo Niño Jesus de Cebu, the country’s oldest Catholic relic, is about half a millennium. And the Filipinos’ dynamic expressions of devotion to it could be the important symbols of hope for humanity, said a key official of the Augustinian Curia based in Rome, who attended the kickoff celebrations for next year’s 450th anniversary of the Kaplag, or the finding of the image of the Child Jesus by the returning Spaniards in 1565.

“Filipinos, when they celebrate the feast of Señor Sto. Niño, light up the world around them,” said Fr. Tony Banks, OSA, the assistant to the superior general of the Order of St. Augustine in the Asia-Pacific region. “The festivity’s message that crosses continents is always the absolute joy of the Filipinos with the Child Jesus, which is expressed in songs, dances and prayer.”

The Sto. Niño de Cebu is enshrined in the Basilica Minore in Cebu under the Augustinian friars.

Father Banks also stressed that in the Sto. Niño celebrations in Cebu, he saw “the joy, the hope and the inspiration that children give, those which motivate people to preserve and be responsible custodians of our world.”

Kaplag now refers to the commemoration of the rediscovery in 1565 of the image of the Child Jesus, which had been given to Queen Juana, wife of King Humabon of Cebu, during Magellan’s historic expedition to the Far East in 1521.

History has it that King Humabon and his subjects of about 800 accepted the faith and were eventually baptized by Fr. Pedro Valderrama, the expedition’s chaplain who granted Queen Juana’s request to have the image placed on her altar.

Forty-four years later, the expedition of Miguel Lopez de Legazpi, with the Augustinian circumnavigator Fray Andres de Urdaneta, reached Cebu to make the effective start of the Spanish colonization and evangelization of the archipelago. On April 28, 1565, they found the same image of Señor Sto. Niño in a hut.

On the actual site of rediscovery, the Augustinians erected a church-convent, from where the evangelization of the country started. Today, what stands on the site is the Basilica Minore del Sto. Niño de Cebu.

Last April 28, exactly 449 years after the rediscovery of the icon, the year-round Kaplag festivities were opened by the Catholic Bishops’ Conference of the Philippines president, Archbishop Socrates Villegas of Lingayen-Dagupan.

In his homily, Villegas connected Kaplag with the day’s Gospel about the finding of Jesus at the temple.

“When we hear from Jesus the question ‘Why are you looking for me?’, what the Lord is asking is the reason why we turn to Him,” said the CBCP president.

He said devotion to the Sto. Niño in Cebu should not be because the devotee is asking for a favor or is fearful of punishment due to a broken promise to the Child Jesus.

“The answer to Señor Sto. Niño should be, ‘Because I love you,’” Villegas said.

After the Mass, the archbishop, as honorary chair of the 450th Kaplag, signed the document for the formal opening of the year-round celebrations, which include a pilgrimage of the 1965 Señor Sto. Niño replica to different parts of the country.

This month, the image will go to Albay, Sorsogon, Isabela, and Laguna; and in parishes in Manila, Quezon City, Marikina and Makati.

In 2015, the Augustinians, who are the custodians of the image of Sto. Niño in Cebu, will also be celebrating the 450th anniversary of their Order’s presence in the Philippines.

Throughout their stay in the country, they have been known as the builders of historic churches, such as the Unesco World Heritage Sites San Agustin Church in Intramuros, Miag-ao Church in Iloilo; and Paoay Church and Santa Maria Church in the Ilocos region. They have also built communities and engineering works.

Fr. Eusebio Berdon, OSA, Prior Provincial of the Augustinian Province of the Santo Niño de Cebu, said the province “has accepted the responsibility to assist in the missions and offices of the Order in Japan, Korea, Indonesia, Australia, Canada and Rome.”

The Filipino Augustinians are set to establish and fortify their missions in Thailand, Vietnam and Cambodia, added Berdon.

Another milestone for the Augustinians next year is the 50th anniversary of the elevation of the shrine of Sto. Niño de Cebu to a minor basilica.

Last year, the basilica saw its belfry toppled down by the earthquake that hit Central Visayas.

Basilica rector Fr. Jonas Mejares, OSA, gave an update on the restoration of the historic church, saying that experts were examining the damage and looking for approaches to rebuild the belfry.

“The basilica also gives Cebuanos the identity as a religious people,” Mejares said.