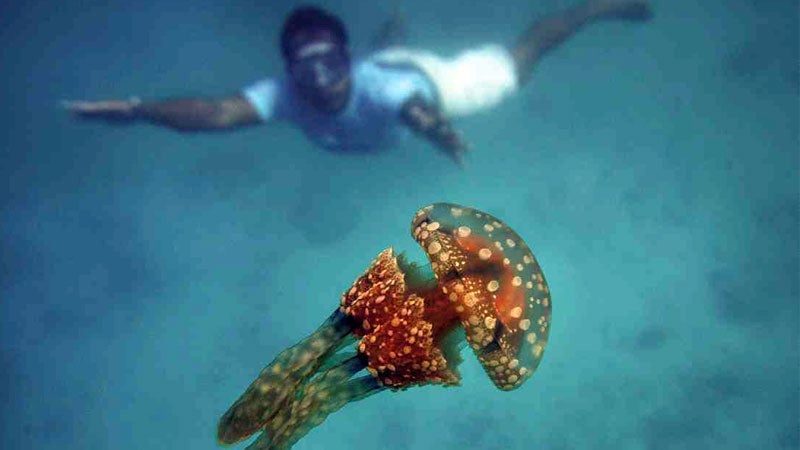 The Inquirer is running a series of articles on the country’s tourism crown jewels—somehow uncut but equally sparkling and surprising as the usual vacation haunts. The articles will appear three times a week during the summer months. Please send us your own hot go-to discoveries to summer by. Text 0917-8177586 for details.—Ed

SOCORRO, Surigao del Norte— From afar, the islands of Bucas Grande look like a cluster of rolling hills rising above blue waters like carefully pruned shrubs.

In between the more than 100 islands are lakes and hidden lagoons, as well as coves and caves, that together form a maze of natural wonders—a one-stop shop of adventure for those visiting the islands.

At Bucas Grande’s Sohoton National Park—a strictly protected area because of its rich biodiversity—guests will be treated to more than just pristine beaches with powdery white sand and crystal clear waters.

When in Sohoton, people do not just take a dip in emerald waters—they swim with the jellyfish.

As they say, Bucas Grande has it all.

Ajoc said his people “rely heavily on word of mouth” to draw in tourists, adding that people and the media “usually find us through referrals.”

And even if a guest has to travel for an hour and a half by land and 30 minutes by boat from Surigao City to get to the islands, Sohoton National Park and the rest of Bucas Grande do not disappoint. (See related story on this page.)

Amid chirping birds, crashing waves and the blue sea flow into a flat, turquoise calm.

As visitors enter the waters on a paddle boat, the lagoon becomes a pool peppered with floating orange blobs. The “stingless” jellyfish basking in the sun steal the show.

Called the “lagoon jellyfish,” these creatures have umbrella-shaped bodies or “bells” where elongated clubs, instead of tentacles, dangle from the midsection.

Younger, smaller jellyfish exude an orange, translucent glow underwater and wobble when tapped on the bells. Holding them with cupped hands makes one feel like he or she is scooping up some thin, fragile Jell-Os.

But the jellies shouldn’t be taken out of the water for more than a few seconds because they may die.

The bigger, older ones, some the size of a cereal bowl, are thicker and firmer. Their white spots are more defined and their color, darker.

Given the stigma attached to them, hopping off the boat and diving into a smack of about 50 jellyfish of different sizes is not as easy as it sounds. The question lingers, “Are they really stingless?”

“Actually, they are not entirely stingless. It’s just that their sting is so mild, humans do not feel anything upon contact with them and it doesn’t trigger allergic reactions,” said marine biologist Ditto de la Rosa of Haribon Foundation.

Jellyfish at the national park usually start spawning from March to May and are in their full grandeur from July to August, local residents say.

The lagoon, however, is only a slice of the paradise.

A few minutes by boat from the Jellyfish Lagoon is the center of the national park and its main attraction—the Sohoton  Cove.

The cove is composed of seven islets with two fascinating caves, the “snoring” and “diving” caves.

A pump boat that can carry up to 10 people goes through the narrow entrance and weaves through the islets where agoho, ironwood and pitcher plants abound.

First stop is the Hagukan cave or the “snoring” cave, named as such because as the tide rises to almost block the entrance of the cave, the waves inside the cave produce the sound of a man snoring, low and loud.

The Hagukan cave boasts of a pair of stalactites that are distinctly shaped like two inseparable snakes.  Another trippy feature of the cave is its luminous, brackish water that makes the swimmers’ skin glow underwater like neon sticks.

The Magkukuob cave, or the diving cave, is often taken more seriously than the snoring one, as it provides a dose of adrenaline rush.

The entrance to the cave is narrower and lower than Hagukan’s,  so one has to duck and walk like a duck. Magkukuob is also rockier, and its stalactites and stalagmites more elaborate, forming human figures that the boatmen point to as “rebulto,” or religious statues.

An opening above the cave floor is the exit and people will have to rock-climb their way out.

Outside the cave is a platform nestled on a cliff from where tourists have to jump back to the waters.

Nonswimmers are welcome to jump off the cliff, as the boatmen waiting in the waters are good swimmers.  They claim to have seen a 60-year-old woman diving in, saying “Yolo” (you only live once).

Just when one thinks he or she has had enough of spelunking for the day, the boatmen set sail again to go to Crystal cave—a showstopping cave on its own.

People have to duck, crawl and squeeze themselves through narrow openings for more than an hour to see the best of the cave. Walls sparkle with crystals, stalagmites and stalactites glisten with little stones.

It is as if the stars have come down and found a new place on earth.

The crystals cannot be touched because they would lose their shimmer upon contact with people.

Perhaps diving and spelunking are not for everybody, especially those who are after the solace found in island getaways.

While boating around Sohoton cove is relaxing enough, the national park has a few more parcels of paradise up its sleeve.

Guests would have to transfer to a two-person paddle boat to go to Tujuman lagoon, meaning only one guest and a boatman could fit in. The lagoon was named after the sea urchins “tujom” that can be found there.

But there’s more to this lagoon than the sea urchins. Tujuman is enveloped in peace, as if an invisible sheet covers the whole place, blocking all noise and allowing only the chorus of chirping birds and the dominating call of the hornbill that echoes throughout the islands.

Guests who prefer beaches won’t have a problem finding one. With a hundred islands to choose from, guests could have a whole islet all to themselves.

In the absence of a vigorous marketing campaign, it may be hard to find Bucas Grande Islands. But when people do, they vow to spread the word—and come back.