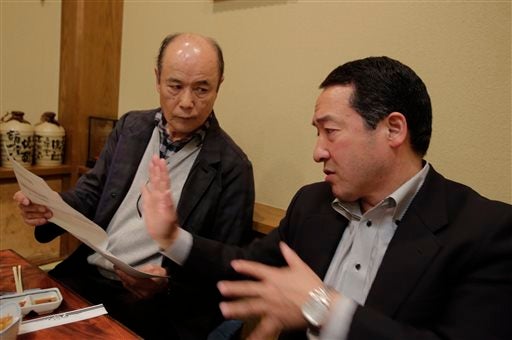 In this photo taken Thursday, April 17, 2014, former Tomioka resident Shigetoshi Suzuki, left, talks with Tomioka city assemblyman Seijun Ando at a restaurant in Iwaki, Fukushima Prefecture, northeastern Japan. A survey last year found that 16 percent of Tomioka residents wanted to return, 40 percent had decided never to return, and 43 percent were undecided. Two-thirds said they were working before the disaster, but only one-third had jobs at the time of the survey, underlining the challenges to starting anew. Suzuki, 65, is outraged the government would even ask such a question: Do you want to go back? Of course, we all want to return, he said. Ando, 59, said that dividing Tomioka by radiation levels has pitted one group of residents against another. AP

TOKYO—A popular manga comic is setting off a public debate in Japan about the health effects of radiation following the Fukushima nuclear disaster — so much so the publisher issued a special edition Monday.

The April 28 issue of “Oishinbo,” by Tetsu Kariya, depicted a character getting a nosebleed after visiting Fukushima Dai-ichi nuclear plant. Three of its reactors sank into meltdowns after the March 2011 tsunami, and radiation contaminates nearby towns.

Big Comic Spirits magazine added a special section in its Monday’s issue with criticism and input it had received on “,” including views from medical experts.

Visa-free entry to Japan for Filipinos still being reviewed