The meditative art of “buugeng.” PHOTOS BY MARIANNE BERMUDEZ

‘Optical illusions’–right at Ayala Triangle– can keep you fit

If you’re a regular at the Ayala Triangle Gardens, chances are you have been mesmerized by a group of young people absorbed in some form of optical-illusion movement.

There’s one making geometric patterns with the fluid movement of his S-shaped prop. Another guy manipulates a wand in the air, appearing to control the object with Jedi-like powers. And another has a hoop that not only spins a revolution from her head to toe, but also rolls on her back, goes up in the air, and falls back down, spinning in one leg.

Collectively it’s a performance called flow art, where students master the art of object manipulation. While each performs a spellbinding dance with their props, their graceful movements belie the real degree of difficulty behind their art. They are trim, fit and strong—and that is not an illusion.

Is the art evolving from “magic” to fitness? Why not?

“The levitation wand started as a magician’s trick. It was then called a magician’s cane,” said Ehrlich Ocampo, the guy with Jedi-like skills, and founder of Firechill Philippines. “But flow art is more expressive; you follow your own rhythm. As you learn to manipulate the wand, you will find your own flow.”

The levitation wand is a prop with a string, balanced precisely so that it stays vertical when you manipulate it correctly. There’s a durable string in the middle of the wand, a braided black line with a removable finger loop and swivel to prevent the string from getting tangled while you spin it.

With training and proper technique, you can make the wand appear like it’s levitating and floating at your command. There’s a lot of arm work and leg work, as well as jumping and turning for advanced students.

If you’re a righty, the finger loop goes to your right hand’s middle or index finger, whichever is more comfortable. The right hand spins the wand—it does all the technical work, actually—while the left creates the illusion.

If you move the wand toward your right side, for instance, your left hand follows the movement, creating an illusion that both hands are “commanding” the wand to move to the right.

“A good illusionist believes in his illusion. Though initially you might think it’s the eyes and the hands, the subtleties and nuances of your fingers and eye focus come from this belief. I myself believe I really have telekinetic powers coming from my hands that control the wand. That way I act accordingly,” Ocampo said.

Illusion aside, manipulating the wand demands physical and mental endurance. The wand is a possessive prop. It will not allow your mind to wander. Instead, it calls for you to focus on the now.

“It puts you in a state where you are moving with this prop and you are totally focused on it, so that everything else gets blocked out. It becomes just you and the flow,” said Ocampo.

The fitness demands may not be the kind you need to finish a full marathon, but keeping the wand floating like it’s under your control, flinging it to your side, pushing it over your head and jumping over it for an hour and a half will give you a good workout.

“The buugeng is revolutionizing the visual arena by combing the unusual shape of the spinning device with martial arts movements and meditation. It’s a set of techniques and skills based on the philosophy of ancient martial arts,” said Hanz Pastor, the young instructor of buugeng.

Buugeng takes patience to learn. Manipulating the blade-shaped prop with your fingers is not an easy task. The buugeng itself is a perfectly balanced instrument. (It’s hinged in the middle for easy storage.) Students will first have to learn to spin the buugeng with their fingers.

Have you ever tried spinning a pen around your thumb? It’s a little similar to that, except that this one is on a much grander scale. You hold the buugeng between your fingers, at its center. The weight of the prop is evenly spread out that you can spin the buugeng easily by pushing it with your thumb. When it begins to spin, let go of the bottom fingers to move them to the top. Continue to push with the thumb until the fingers return to the top.

Sounds complicated? It is. Once you’ve trained your fingers, try doing a reverse spin. And then teach your other hand the same trick. Buugeng demands that you become ambidextrous. The wrists or arms can also be used to spin the buugeng, depending on the movement you’re trying to achieve.

“Buugeng is good for the soul if you accept it and let it become a part of you. Spinning becomes second nature. Buugeng brings a feeling of balance, control and calm, and activates the warrior and spirit-mind energy. It develops the chi, tones the muscles, builds confidence and develops your focus,” Pastor said.

This flow art is mentally and physically demanding. Pastor said buugeng makes you use both left and right brain at the same time, especially when you need to spin and move the buugeng in opposite directions.

“When you achieve a higher consciousness, you can control your mind and body flow without even thinking about what you’re going to do next… You let yourself go, let your mind move your body where it wants to go,” he said.

Making a mean comeback is the hoop. But the hoop you became familiar with when you were 7 years old is not quite the same as today’s rage.

Hoops now fly in the air. Hoopers jump with it, twist and turn it at maddening speeds, and even spin it using their noses and butts. 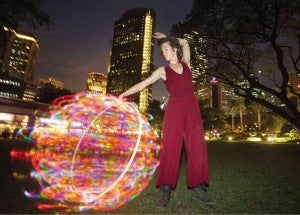 Recently, an American hoop master, Tiana Zoumer, held a series of workshops in the country.

“I consider it a relationship. I have a relationship with my hoop. My body speaks rhythmically with the circle until that becomes an art form. It’s almost like creating music that no one can hear, but your whole body feels it,” Zoumer said.

Learning the hoop puts a great amount of pressure on the student. Zoumer said there’s a weird, huge responsibility to keep the hoop up. But it is precisely this need to keep it from falling that helps the students find their center.

“Finding your center in the middle of the hoop and needing to keep something moving is forcing you into your rhythm. Flow is the resonant harmony between internal and external forces. As one practices, one develops an exchange that displays synchronicity through understanding the shifting balance between the mover and the moved. It is movement as meditation,” she said.

Zoumer said the most important skill a hooper learns is self-love. Behind the jaw-dropping performance, hooping, she said, is a practice that challenges the body to listen and let go.

“Whether hooping around the waist or building more intricate skills, both take time to nurture, and it is the relationship you have with yourself that becomes the display of understanding in your movements,” she said.

Your journey to fitness can begin with the hoop. Clair Ching, now a hoop instructor, lost 43 pounds since she started two years ago.

Zoumer admitted she wasn’t very good with the hoop when she first started five years ago. She was breaking an average of three hoops a month. 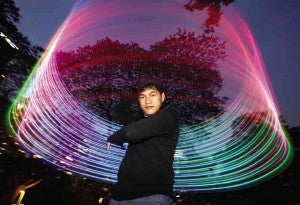 Today, Zoumer travels around the world to give workshops and perform.

How did that happen? Thousands of hours of practice.

If you need to master anything, 10,000 hours is what you need to get there, she said. “However obsessed or dedicated you are, you’ll get there as quick as you want.”