Peter Dinklage: ‘There’s a mutant in all of us’ | Inquirer Lifestyle ❮ ❯ 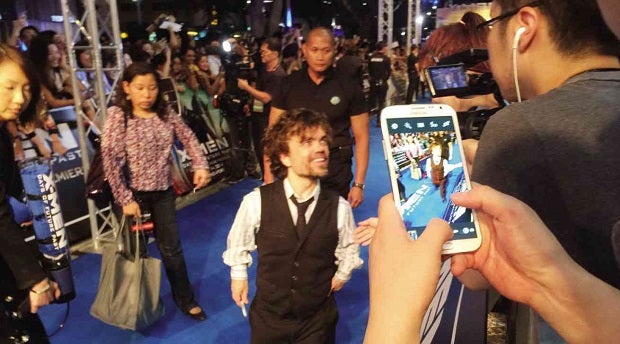 Peter Dinklage: ‘There’s a mutant in all of us’

SINGAPORE—Peter Dinklage grew up very familiar with the X-Men. The 44-year-old American actor, best known for his standout dramatic turn as noble Tyrion Lannister on HBO’s “Game of Thrones,” explains: “You couldn’t avoid the X-Men phenomenon. I read the comics and I was certainly a huge fan of the movie series.”

He tells Inquirer Lifestyle Super that being the new guy on the set of “X-Men: Days of Future Past” made everything easier for him, even if he had only one month to prepare. “I got the call from Bryan Singer, talked about the project, and we started shooting about a month later,” he recalls.

“I had the advantage of knowing I was going into a great franchise and knowing I was going to be well-protected,” he says. “I’m a small piece in a big puzzle. I was nervous, certainly. In my experience, the best things tend to happen very quickly. Sometimes, when you have too much time, you over-think things and drive yourself crazy and destroy your performance. I like thinking and acting on my toes.”

He notes that the other actors who had been working together—everyone from Patrick Stewart to James McAvoy— warmly welcomed him. “They welcomed me even if I was playing the guy who wanted to wipe them all out,” he says while admitting he’s also a big fan of the other actors’ work outside the X-Men franchise. “That’s a testament to the stories and the complexity of their characters. You write a great character and you’re going to attract a great actor. It boils down to great storytelling with great drama. These movies would be nothing without that.”

Not your typical villain

The character Dinklage plays is not your typical villain. Bolivar Trask is a scientific genius as well as an opportunist who’s in the business of making weapons. “This guy believes he’s being heroic. He wants to save mankind,” Dinklage says.

Believing that mutants represent a danger to ordinary humans, Trask develops the Sentinels as a solution.

“He’s smart and he’s a more realistic villain,” says Dinklage. “Evil is a relative term. I think it may be an overused term. And it’s a term that we ascribe to things we want to distance ourselves from. I believe everyone’s capable of terrible things, it’s just a matter of the circumstances. He’s going to profit from this and he is going to destroy many lives. The fact that he’s profiting from it, that’s pretty close to evil, I believe.”

Bringing intelligence and intensity to the role, Dinklage thoroughly enjoyed Trask. “It’s something I’ve never done before and that’s what always attracts me,” he says. “I hate repeating myself. It’s very different from the TV show (‘Game of Thrones’) that I’m doing. I don’t want to bore anyone and I don’t want to bore myself, most importantly. It’s a funny thing to say, but I don’t ever want to be comfortable as an actor.”

He would love to be a mutant who can fly but fears he wouldn’t be particularly good at it. “I would probably be electrocuted or crash into something. I wouldn’t be as graceful as they are,” he points out.

Asked if he believes mutants exist in real life, Dinklage has a ready, impassioned answer: “We’re all mutants. There’s a mutant in all of us. That doesn’t sound right. I feel like that’s the great thing about this movie. I kid, kind of, but we all have felt it. I certainly have.

“Obviously I’m physically different from a lot of people. It’s a mutation genetically, but it’s just a bit more visual than other people’s mutation. I feel that, whether it’s an emotional, mental or physical mutation, we can all relate.”