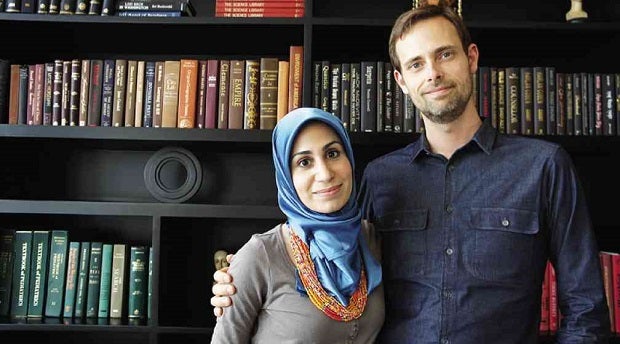 When we first met book authors Ransom Riggs and Tahereh Mafi in Manila last year, they were so sweet to each other that we couldn’t help but wonder if they were an item.

When the twosome came back a few weeks ago to meet fans courtesy of National Book Store, it turned out they were already married. Ransom Instagrammed a beautiful photo of Tahereh and her “wordy” bridal bouquet—she walked down the aisle in a bouquet of paper roses made out of pages from Ransom’s book.

It seemed like what a character from a young adult (YA) novel would do; such loving gestures have made Filipino fans go crazy about the author “love team,” something that has befuddled—and amused—both Ransom and Tahereh, aka “Ransereh.”

“It’s the strangest part of this whole thing. I definitely did not think that as a writer I would be embarking on this kind of situation, like going to a book signing and having people cheering for your relationship,” said Tahereh with a laugh.

Meanwhile, the exciting (and satisfying) conclusion to Tahereh’s X-Men-ish series came out this year, too. Both books were released within a month of each other, so it was just perfect for her and Ransom to do a Philippine fan meet with YA author Veronica Rossi.

Super caught up with Ransom and Tahereh, and they talked about how two writers live and work under one roof, and Tahereh winning over Ransom’s cat Nico.

You came out with a FAQs video. Do people really ask you where they can download your books illegally?

Ransom Riggs (RR): We both have been (asked). People would tell us, “I don’t wanna pay for this.”

Tahereh Mafi (TM): I’ve met people at events who’ve asked me that and you never really know what to say. I mean, on one hand, you’re grateful that they’re reading your book and, on the other hand, you’re like, “Well, that’s how I pay my bills. So, I’d like to eat dinner tonight.” I’m kidding. It’s a complicated relationship because not everyone has spare cash to buy books which I totally understand, but that’s why we have libraries, you know?

Another video showed the two of you turning into muppets. Ransom, what was it like kissing the muppet version of Tahereh?

RR: (Turns to Tahereh) Did I kiss your muppet?

TM: Aww, was it fuzzy? I forgot to shave my muppet face that morning.

RR: That was really fun. I wanna use those muppets more. I think they’re great actors.

TM: Ransom’s a really great muppet. He has a great muppet voice, and I was just like me, but high-pitched.

How long does it take to make a video, and do you have a crew helping you out? Where did the muppets come from?

RR: We got the muppets from FAO Schwarz. You can design them online. Our videos take a few hours. They’re like half-improvised.

Whose laptop did you “flush” down the toilet?

You guys got married recently. What’s it like having two writers under one roof? Did you have to lay down ground rules and get separate offices?

TM: We have a shared office space and sit at the same desk; so when we want to work, we’re both working at the same time. We wear noise-canceling headphones; it’s sort of understood that when we put the headphones on, we’re in our workspace and there’s no conversation. It’s great respect for each other’s work and method, and when we take our headphones off, it’s like, “Now you are welcome to speak to me.” It’s great, it’s really fun.

RR: We understand each other … what it’s like to be a writer, so it’s easy to know when the other person needs space.

Have you guys thought about writing something together?

RR: We’ve talked about it, but I’m deep into “Miss Peregrine” for a while.

TM: We’ve thought about it, but I’ve been busy with “Shatter Me.” I’m working on something new now that I can’t quite talk about yet, so that’s keeping me busy. Maybe one day. I don’t think we’re ready to say never, but maybe one day. It could be fun.

Ransom, how many more books are you doing for “Miss Peregrine”?

RR: One definitely, so there’ll be three, and maybe more after that.

TM: She came with Ransom. She’s the sweetest cat.

Was she jealous when you moved in, Tahereh?

TM: So jealous. She did not like me. She was like, “Stop touching my human. That’s my human.” And I was like, “You have to share!” She was like, “No! Also, go away.” But then we got to know each other and now we’re really close. I love her, and I think she tolerates me.

You were here last year. How was the crowd this time? We saw photos on Instagram, it was nuts.

TM: Yeah, there were like 2,000 people there (in Manila). It was a challenge because we had just arrived that morning so it felt like a dream. You were already jet-lagged but it was incredible. In Cebu, it was a smaller space, so the sound was louder and it was vibrating with passion. It’s such an amazing group of people here in the Philippines. I’ve never seen such love, such overwhelming enthusiasm. Really amazing.

Tahereh, when you were here last year, we were still torn between Adam and Warner, but “Ignite Me” made it so clear who the choice was that we feel ridiculous now. How was the fallout from fans when they found out? Did the Internet explode?

TM: Without spoiling anything, I knew it was going to be difficult. The level of devotion to those characters was so wonderfully shocking; I did not expect readers to get so invested. I was so happy, because you always want readers to feel like the characters are real. It was difficult trying to negotiate writing the right story and also not disappoint fans. I was bracing for the impact but I survived the crash.

Are you planning to return to the “Shatter Me” universe again? We’re sure people would love to read the story of the guy who got left behind.

TM: I won’t say never, but it was almost four years with that story. As a writer I’m just sort of craving something new, but I think the more distance between me and the series, the more willing I’d be to turn back to that world. Not anytime soon, though.

A lot of Filipino “Ransereh” shippers are thrilled about your recent nuptials. How did the fans react when you guys first came out onstage?

TM: They were chanting “Ransereh.”

RR: It was really sweet. It’s not the usual thing for people to have cheerleaders for their relationship but (laughs), it’s kind of awesome.

TM: It’s very interesting, but I’m also very glad that they ship us. Because we ship us (looks at Ransom).

What clues should we look out for in your next books to know that the character you wrote is based on each other? Would you create a character based on the two of you?

TM: As writers we put so much of ourselves and people we love in all our characters. Warner got his love of clothes from me. Kenji I borrowed from my brothers and a little bit from my mom—she has a very funny sense of humor. Maybe one day I might make one of my characters someone who drinks espresso every morning and is very particular about it, but that’s not necessarily Ransom (laughs).

RR: You make fiction out of your life, but I wouldn’t encrypt Tahereh into one of my characters. I like her more in the real world.

TM: He is so much more alive in real life than he would be in fiction. It would be impossible to contain him in just a few paragraphs.

Tahereh Mafi’s and Ransom Riggs’ books are available in National Book Store or as eBooks via http://www.kobobooks.com. Visit http://www.nationalbookstore.com.ph. Follow them on Twitter/Instagram: @nbsalert.