Is there a Filipino way of doing Shakespeare? | Lifestyle.INQ ❮ ❯ 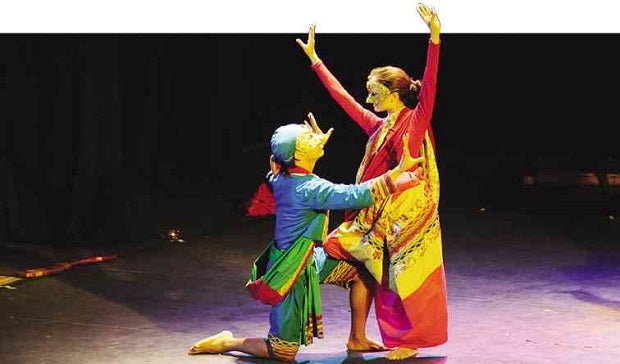 Is there a Filipino way of doing Shakespeare?

William Shakespeare (1564-1616) is arguably (or perhaps inarguably) the greatest playwright this planet has ever produced. For many of us, his plays, especially the major tragedies like “Hamlet,” “Macbeth,” “Othello,” and “King Lear,” were required reading in college. Back then, it was almost unthinkable to graduate from high school and university without having to struggle with at least one of his works.

“Struggle” is not an exaggeration. Reading and/or listening to a Shakespearean play or watching a live performance of it requires critical thinking, analysis, an understanding of the milieu of his protagonists, and, most of all, an appreciation of his language, which is lyrical, poetic, multi-layered in meaning, and yes, complicated.

At the same time, it meant going beyond your own present social and cultural context to grasp the universal themes that Shakespeare was saying about the human condition. Revenge, romance, racism, betrayal, jealousy, loyalty and lust—the playwright portrayed all these familiar tropes in a canvas so grand that his stories, peopled by unforgettable characters, haunted your mind for a long time.

Many theater companies in Manila like Repertory Philippines played Shakespeare straight, staying true to the text, the language and historical setting.

In “Julius Caesar,” for example, trained actors in togas delivered the familiar words in English amidst a lavish set that echoed the ancient Roman monuments. As the late Rep founder Zenaida Amador once said in an interview, the fidelity to the script and the setting was part of the company vision to educate the audience about the best and proven kind of theater.

There was very little diversion in the approach or the design. In that sense, what would make different each production from any theater company that tried this so-called classical treatment were the performances.

In the late 1990s, one theater reviewer admitted that she watched Shakespearean plays because of her desire to immerse herself in the Bard’s world and in the beauty of his language—and woe to any unprepared theater actor who mangled or did less justice to it.

Still, fidelity had its drawbacks, especially during the late ’70s to the late ’80s when a newfound sense of nationalism in local theater demanded a dramatic form specific to the Philippine (or Asian) situation, and that employed native language. A classic staging of Shakespeare was thus regarded as elitist and ultimately irrelevant to the audience.

Playwright Rody Vera, who has won acclaim for translating Shakespeare plays into Filipino, explained the context and his own former perspective: “… Shakespeare was regarded by cultural workers like me to be a colonial imposition on our educational system. Our first resentment was: Who could understand Shakespeare, what with all that difficult English? The so-called universality of the themes in [his] works seemed abstract, distant and oblivious to poverty, corruption, tyranny, the wide gap between rich and poor, landlessness, disempowerment.”

Vera’s notes were read during “Shakespeare in Asia,” a conference held late last year by the UP Department of English and Comparative Literature. The two-day event invited academicians, researchers, students, and theater practitioners from various Asian countries to explore the various aspects of the Bard’s writing and touch on its relevance to their own particular forms of drama.

According to Vera, it took a foreigner, German director Fritz Bennewitz, to show him a different view of Shakespeare. Bennewitz was a guest of the Philippine Educational Theater Association (Peta) and was helping the activist theater company stage a radical version of “Macbeth.”

The classical approach was pushed aside, and the tragedy of the ambitious Scottish chief and his wife was used to mirror the Marcos regime and their perceived role in the assassination of Sen. Benigno Aquino Jr. It was one of Vera’s first efforts to translate Shakespeare into Filipino, with Bennewitz as his guiding hand.

Throughout the process, Vera recalled, “[Bennewitz] showed me how an English playwright would be directly related to issues I advocated. Shakespeare’s works began to take on a Filipino sensibility; they began to reflect more clearly the historical conditions of my country, and reflect, too, our aspirations. They began to address, in concrete terms, what was happening around us as a nation.”

Vera’s most recent exploration into Shakespeare last year resonated loudly with both critics and audiences. Tanghalang Pilipino’s “Der Kaufmann” relocated “The Merchant of Venice” to a Nazi concentration camp where the Jewish prisoners were forced to reenact the play, thus doubly underlining its horrific issues of racism and injustice.

One of the more direct reimaginings of a Shakespeare play into Philippine society was Dulaang UP’s “Tinarantadong Asintado” in 2011. Translated by Layeta Bucoy and directed by Tuxs Rutaquio, it converted one of Shakespeare’s lesser known plays, “Titus Andronicus,” into a political clan war.

The bloodbath and carnage in the original material would make even brave theatergoers pause. DUP’s version made the impact more immediate by situating the play in the all-too-familiar milieu of Pinoy politics in the grip of elections, with warlord families and their guns, goons and gold running riot across the bloody landscape.

Rutaquio and the creative team did not pull their punches. That most-loved Pinoy meal, the dinuguan, for instance, became a metaphor for the spiritual and literal cannibalism that made beasts out of warriors.

“[It was] the blood of people butchered like pigs in a slaughterhouse, their blood left to cool down on the floor then scooped with a plate to make stew… their bodies being collected by the clown of death as it mocks the senselessness of their deaths,” explained Rutaquio.

Clannishness, an integral element in Philippine society, took center stage again in Tanghalang Ateneo’s 2012 restaging of the teen-romance-turned-nightmare, “Romeo and Juliet.” The emphasis on the love element, however, made the Aliw Award-winning movement play “Sintang Dalisay” more of a bittersweet story than a blood feud.

TA’s artistic director and the play’s director Ricky Abad married Shakespeare with a local Filipino poem that was based on “Romeo and Juliet,” along with aspects of the Sama Badjao culture in Mindanao. Fair Verona was transferred to Southern Philippines, traditional Filipino courtship took over, and this local Romeo would wait for months before even climbing the balcony of his Juliet.

Abad also brought his expertise as a socio-anthropological professor into play. He had Badjao artists teach his creative team and performers Badjao music and dance.  The two groups, Christian and Muslim, learned from each other, combined their talents and found the commonality in their respective art forms to make some kind of fusion possible.

In the conference, Abad said the experience had repercussions outside of the staged performance: “It was about privileging Badjao custom and aesthetics when textual problems arose. It was also about the Badjaos learning about fusion of their forms with those of others. Theater academics call this ‘convivial theater.’”

A Shakespeare reading can still appear daunting to many, but over the years, many theater artists have modernized the Bard to address current issues.

Bart Guingona’s all-male version of “The Taming of the Shrew” for Rep tackled feminism and the role of women in society. Herbie Go’s “R’meo Luvs Dhew-Liett” had the actors reciting the famous lines in Pinoy hip-hop style, with the play set in a poor barangay. And José Estrella used the Cordillera region and its culture for her version of “Macbeth.”

The journey is continuing, as more theater artists discover ways to make Shakespeare more relevant to their lives and society.

Abad summed up his own experience thus: “My route to Shakespeare went from colonial to postcolonial to convivial. And when different groups and traditions are involved, the convivial process also sets a paradigm for bringing together diverse groups to work for a common purpose. And it is here, I think, where we can connect theater and nation: convivial theater as way to bridge groups and cultures—a promising approach …”